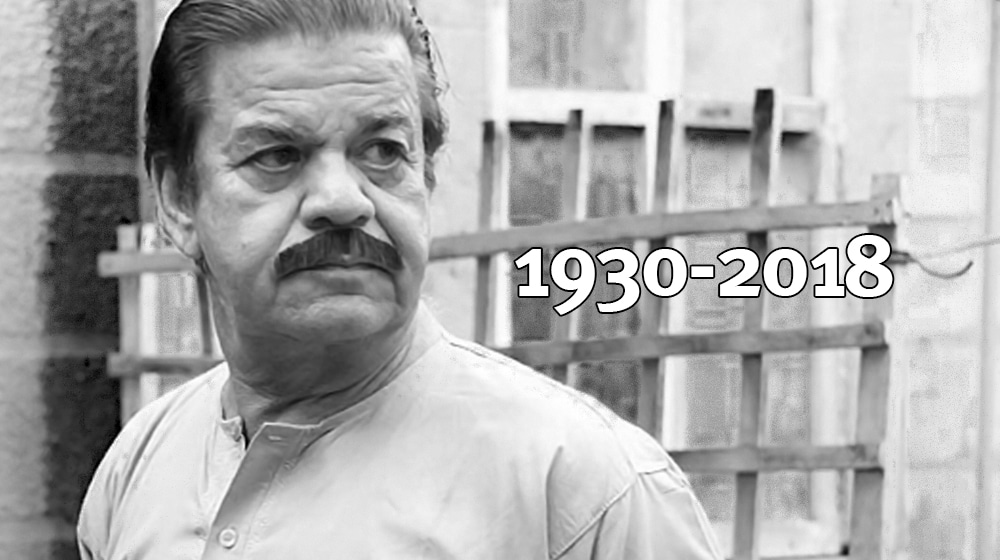 Qazi Wajid, a renowned TV actor and showbiz veteran recently passed away. He was admitted to a hospital after contracting high fever, shortly passing away while undergoing treatment for the same. He was 87 years old at the time of his death.

According to personnel from the hospital where he was admitted, Qazi Wajid suffered chest pain and had a serious fever. On his way to the hospital, he was administered first aid which, unfortunately, did not help his deteriorating condition.

His funeral prayers were held yesterday and he was laid to rest at the Esa Nagri Graveyard in Karachi.

Tributes poured in for Qazi Wajid over and off social media. He was universally loved for the roles he played during his lifetime, with many people recalling his legendary performances in some of the best shows aired on Pakistani television such as the cult-classic Tanhaiyan and Ankahi. His six decade media related career has earned him accolades from all across the globe.

Tribute to Zubaida Aapa: Her Death Leaves a Nation in Mourning

There are only so many artists who’ve been around for generations and could still actively perform.

Qazi Wajid—-gem of a human being and a truly versatile actor. Rest in permanent peace and bliss. Ameen!https://t.co/8zEL5zmjUd

One of my fav personalities #QaziWajid sahib has passed away today. He played my grandfather in my first ever play for ARY. He was supportive, encouraging through all our scenes together. May you get the highest ranks Sir. You were a gem. R.I.P :( pic.twitter.com/L13P3tTjKU

Sad sad day for Pakistan.. we say goodbye to a great great artist and a fearless activist. They shall live on through their work, always. #QaziWajid #AsmaJahangir pic.twitter.com/RLWZzR7aK2

Everyone in the media industry is sad to lose a father figure.

A very Sad Day for Pakistan. #QaziWajid and #AsmaJahangir is no more with us. May Allah rest their souls in peace. Ameen…. Sad Sunday 😢 pic.twitter.com/lrTIQopdrk

It’s a sad day today. We have lost two icons. May their souls rest in peace pic.twitter.com/CQcl6evQSe

Some well-known sports celebrities honored him with their tributes too:

Sad day for Pakistan loosing two icons of our time. Both Qazi Wajid and Asma Jahangir you will be missed. May you rest in peace .

Loosing two giants in a day is a great lose to the Nation. Asma Jehangir courageous, outspoken and a brave woman..Qazi Wajid a great actor. Both will be missed dearly #Irreplaceable #RIP

Qazi Wajid sb was gem of a man,last time when I met him with Actor/Comedian Ayaz Khan,he appreciated my work & encouraged me.May Allah rest his soul in peace,Aameen pic.twitter.com/9D4c3Mrqie

Am saddened by the demise of 2 important Pakistani icons , #AsmaJahangir and #QaziWajid.May their souls rest in peace!

One of the top actor of our Drama industry and a lovely human being RIP Qazi Wajid . pic.twitter.com/qOFRH7T8pJ

– Qazi Wajid, great artiste & a very kind man. Met him only a month or so back at a friend’s wedding. He was so humble & down to earth .. #RIP

Qazi Wajid will continue to live on in the hearts of Pakistani artists in the film industry and his fans. He received the Pride of Performance award in 1988 by the Government of Pakistan, an award that is only reserved for citizens who are exceptionally excellent in their fields.

Some of his most famous evergreen TV dramas that made him a legend were Dhoop Kinare, Ankahi, Marvi, Tanhaiyan, Mehdni Khala Khairan, and Khuda Ki Basti.