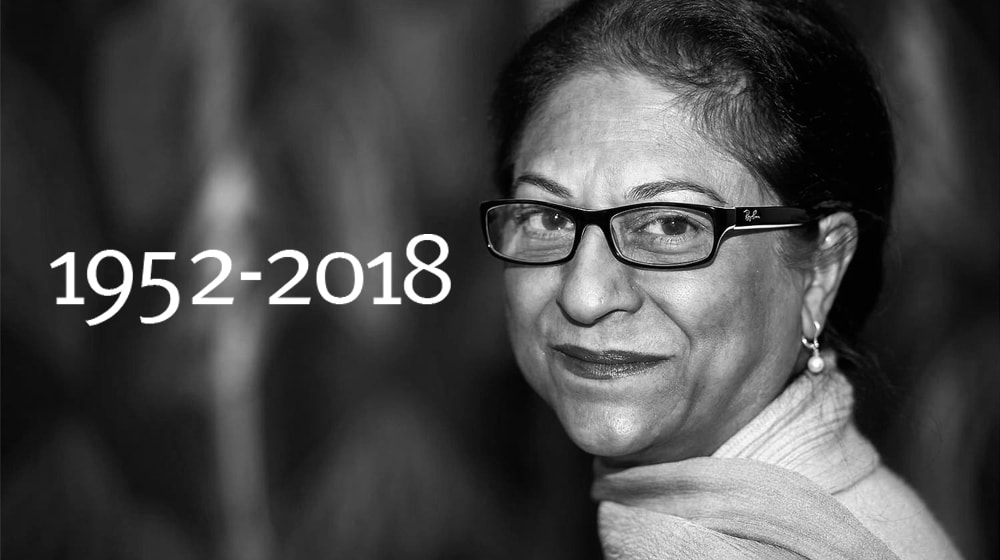 Asma Jahangir, a well-known human rights activists passed away this Sunday and left thousands in mourning.

Asma Jahangir, a renowned human rights activist, lawyer and co-founder of Human Rights Commission of Pakistan passed away this Sunday in Lahore.

The 66-year-old mother of three, was diagnosed with a heart attack before her death.

Asma was known for her courage – one who bravely stood up against powerful people including politicians, businessmen, and dictators, throughout her career.

Shahid Khaqan Abbasi, Prime Minister of Pakistan, said that her death was a great loss for the legal fraternity. He wasn’t the only one as many well-known personalities and citizens, paid their tributes to her.

Pakistan Becomes A Member of the UN Human Rights Council

Asma Jehangir's death is a loss of a strong voice for the marginalised and oppressed. Despite our differences I always respected her for her fight for human rights and for standing up for her convictions.

Democracy, human rights and resistance against oppression lost a great soldier- Asma Jehangir. It's everyone's loss. What a sad day!

Shocked to hear @Asma_Jahangir passed away. Huge loss for us, for #Pakistan. She was courageous, fearless, invincible. In absolute disbelief. Please pray for her & her family.

Deeply saddened by the news of sudden demise of renowned lawyer and human rights activist Asma Jahangir sahiba. Pakistan has lost a passionate champion of human rights and a staunch supporter of democracy. May her soul rest in peace!

What a loss! A great colleague Asma Jahangir passes away. Few days ago, we appeared together in the Supreme Court. This distinguished voice shall be remembered for long

Asma Jahangir and Hina Jilani's writings, work and brave fight against the Hudood Ordinances and the barbarity of General Zia ul Haq's legal legacy remains unparalleled in Pakistan to this day. Condolences to the Jahangir family and the many who were served in that good fight

Am requesting the #PrimeMinister #ShahidKhaqanAbbasi to consider giving Ms. #AsmaJehangir a state funeral & allowing the Sindh Government to fly the national flag at half mast out of respect for her matchless contributions & unwavering principles #StateFuneralForAsmaJehangir

Even notable media personalities and journalists expressed their thoughts regarding her life and passing away:

My tribute to Asma Jahangir-Death of Asia’s Joan of Arc – The Indian Express https://t.co/2oW9CAhvi8

I still remembered how Asma Jehangir helped media workers time and again during Wage Award struggle. Once when Ch. Aitzaz Ahsan decline to contest the case, Asma come forward and won the case for media workers.

A male friend once asked: why is #AsmaJahangir always so angry? What disturbed him perhaps was why she always spoke up and appeared utterly unafraid in this world dominated by masculinity’s apoplectic id. For me, this is what #AsmaJahangir was: she was brave enough to be angry.

2 important people left all of us today. RIP Asma Jehangir & Qazi Wajid. Beyshakk to Allah we belong & to him alone is our return.

Saddened by the news of sudden death of Ms Asma Jehangir,the renowned Human Rights activist from Pakistan.She was very vocal on the grave HR violations in #Kashmir &actively supported our just cause.We extend our heartfelt condolences to her family and pray for the departed soul

It is Asma Jehangir who deserves the Medal of Democracy and State Funeral.

I shudder to think of Pakistan's future without Asma Jehangir. So vulnerable & unguarded.
A petite, 5 ft tall woman stood tall like a giant, staring down at the mightest & most powerful, fighting for the rights of the wretched &down trodden without a fear in the world. Who now?

Heartbroken that we lost Asma Jahangir – a saviour of democracy and human rights.

I met her a week ago in Oxford. I cannot believe she is no more among us. The best tribute to her is to continue her fight for human rights and democracy. pic.twitter.com/Tf7VOYfvq5

Across the border, the tributes flowed in:

Asma Jahangir , undoubtedly the bravest and the most resilient fighter for human rights who had the courage to face the wrath of the dictators and the fury of the fundamentalist Mulla has passed away . It is the loss of the whole Sub continent .

Some grieved and some continued their criticism even after her death: