The Federal Board of Revenue (FBR), on Thursday, suspended sales tax registration of Shell Pakistan for deliberately committing tax fraud to evade tax.

Shell had concealed the actual amount of sale of its products and paid less tax. In its order, Asma Aftab said that during the scrutiny of sales tax returns available at E-Portal of FBR, for the periods from December 2016 to Feb 2018, it was discovered that Shell Pakistan had concealed the stock of lubricating oil in Annexure J of Sales Tax and Federal Excise Returns.

During the above-mentioned duration, Shell Pakistan made Suppressed Sales of Rs 7.684 billion. On this value, principal sales tax is Rs.1.46 billion. FBR also imposed a default surcharge of Rs. 142.503 million and a penalty Rs. 73.003 million at the rate of 5 percent.

According to FBR, Shell Pakistan was committing tax fraud for the past three years. 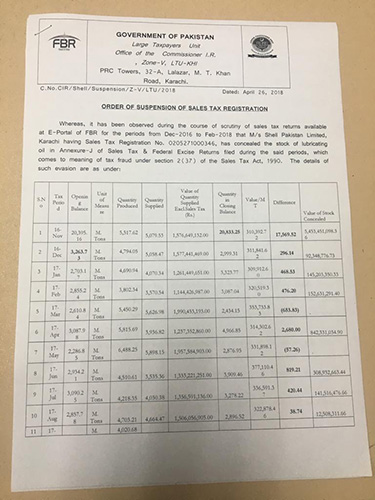 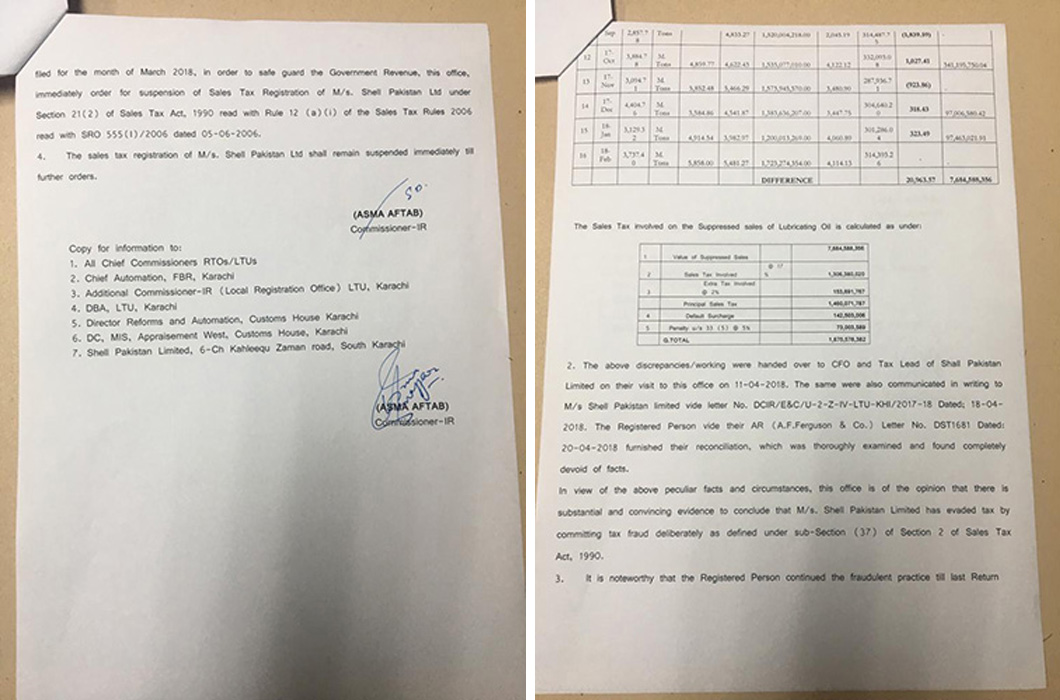 The order to suspend the registration was issued by the Large Taxpayer Unit after it was concluded that the ‘oil company has concealed the stock of lubricating oil in Returns filed during the period of Dec-2016 to Feb-2018, which comes to the meaning of tax fraud’.

It is noteworthy that the Registered Person continued the fraudulent practice till last Return filed for the month of March 2018, in order to safeguard the Government Revenue, this office immediately order for suspension of Sales Tax Registration of M/s. Shell Pakistan Limited under Section 21(2) of Sales Tax Act, 1990 read with Rule 12 (a) (i) of the Sales Tax Rules 2006 read with SRO SSS (1)/2006 dated 05-06-2006.

Shell Pakistan was contacted to comment on the story but the management has refused to make a public statement on this development.

Shell Pakistan Limited (SPL) had received a notification from the FBR requiring the company to explain a tax discrepancy, SPL was allowed by the FBR to respond by 30 April 2018. The company had earlier clarified that the relevant amount of tax had been paid in full therefore there was no shortfall in the payment of tax.

However, FBR proceeded with the suspension of SPL’s GST license before the stipulated time given to the company to respond. The suspension of registration was hence not justified, SPL therefore took the matter to the Honorable High Court of Sindh which has suspended the directive of FBR and ordered that it be reinstated with immediate effect.

SPL complies with all statutory requirements of the Country, and strives to conduct its business in accordance with the applicable laws of Pakistan. SPL will continue to work closely with the tax authorities to resolve this issue.

Update: Federal Board of Revenue (FBR) has restored sales tax registration of Shell Pakistan after the court issued a stay order on Friday. The company approached the Sindh High Court for relief. The court granted a stay order in larger public interest and fixed the hearing for April 30, 2018.