Oil prices fell on Monday morning in Asia as the market eyed an increase in output from the world’s three top crude producers, Russia, the U.S. and Saudi Arabia.

Brent and WTI have fallen by 6.4 percent and nearly 9 percent respectively from peaks reached earlier in May. 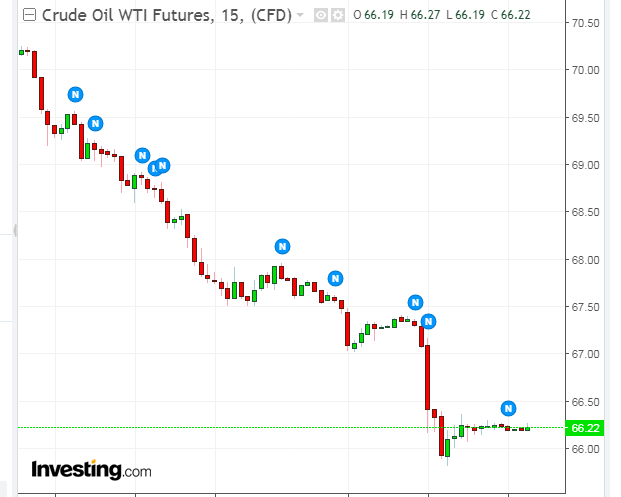 The Organization of the Petroleum Exporting Countries (OPEC), as well as a group of non-OPEC producers led by Russia, started withholding output in 2017 to boost oil prices and clear a supply glut. The group had agreed to curb their output by about 1.8 million barrels per day (bpd).

Prices have soared since the start of the cuts, with Brent breaking through $80 per barrel earlier in May. The pace of the recent rise in oil prices has sparked a debate among investors on whether this poses downside risks to global growth.

Russia, in particular, has shown eagerness to end the production cuts, with energy minister Alexander Novak saying last Thursday that restrictions on oil production could be eased “softly” if OPEC and non-OPEC countries see the oil market balancing in June.

U.S. sanctions against Iran, which produces 4% of global oil supplies, will likely cause shortages later this year when trade restrictions take effect. Production in Venezuela has also plunged to its lowest level in decades due to its ongoing economic crisis.

To address potential supply shortfalls, Saudi Arabia, the de-facto leader of OPEC, as well as Russia said on Friday they were discussing raising oil production in the second half of the year by some 1 million bpd.

“Crude oil prices collapsed … after reports emerged that Saudi Arabia and Russia had agreed to increase crude oil production in the second-half of the year to make up for losses elsewhere under the production cut agreement,” ANZ bank said on Monday.