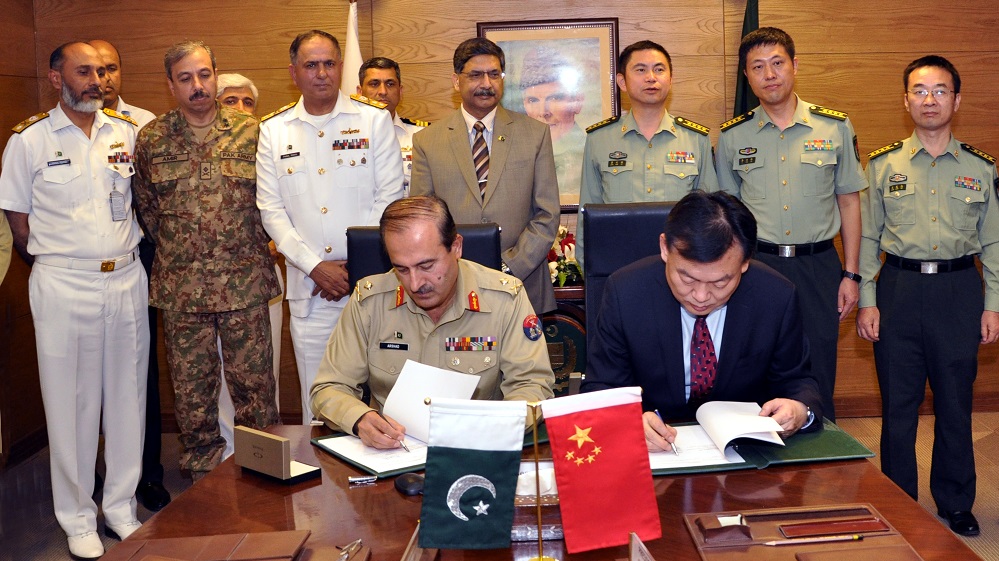 Pakistan Navy will obtain two warships from China. These wars ships will be equipped with the latest warhead and surveillance equipment. Induction of these ships will add to Pakistan Navy’s power in Indian and Arabian Sea.

A ceremony was held at Ministry of Defence Production, Rawalpindi to ink the agreement. A representative of Ministry of Defence Pakistan and M/s China Shipbuilding Trading Company Ltd (CSTC) signed the contract for the acquisition of 2x warships for Pakistan Navy. Deputy Chief of Naval Staff (Operations), Rear Admiral Faisal Rasul Lodhi was also present on the occasion.

These new warships are Type 054 A frigates. These ships will be inducted in Pakistan Navy fleet by 2021. Type-054 A frigate is a very famous warship, codenamed Jiangkai II by NATO. These ships are the backbone of China People’s Liberation Army Navy. Pakistan, in 2017, ordered 2 warships and with this agreement of 2 more warships, the order totals 4 Type – 054 A frigates.

The acquisition of these modern ships is certainly a valuable addition to Pakistan Navy which is an ardent defender of National Maritime Interests of Pakistan. This will enhance Pakistan Navy’s capabilities to safeguard its sea frontiers as well as fulfill regional and international obligations.

According to sources, Pakistan increased its reliance on China regarding military hardware. Chinese 054 A will replace the United Kingdom made 06 Type 21 frigate which was obtained in 1990.

The state of the art warship is equipped with the latest weapons including long-range missiles and Hi-tech sensors, capable of undertaking operations in all domains of naval warfare. Type 054 A warships are equipped with 730 close-in weapon systems (CIWS).

The autonomous Type 730 provides improved reaction time against close-in threats. It also has an H/PJ26 stealthy 76 mm dual purpose gun mount, which is a Chinese development of Russian AK-176. The adoption of smaller caliber gun is the result of the need for a higher rate of fire for air defense, including sea-skimming anti-ship missiles.