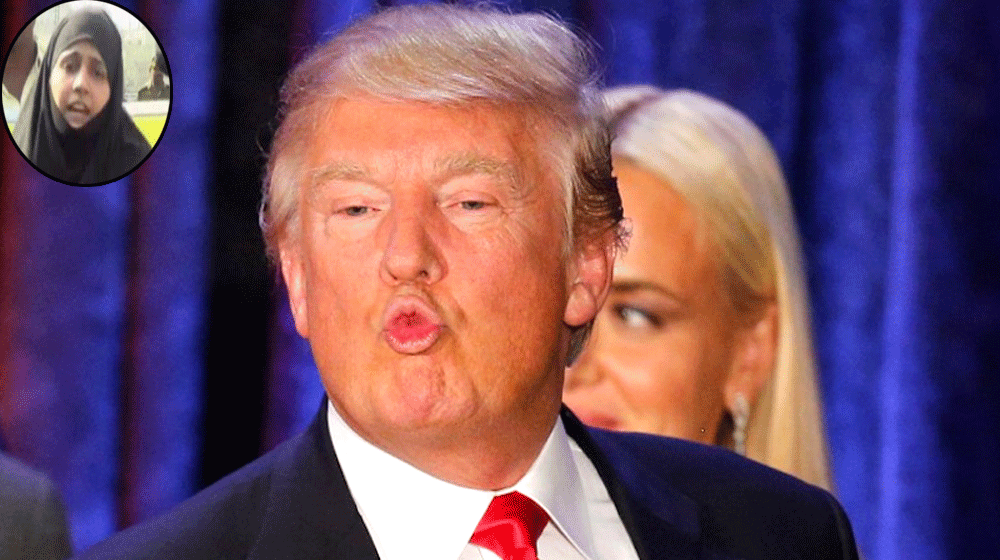 A lady named Ammara Mazhar, claiming to be the daughter of US President Donald Trump, has approached Supreme Court of Pakistan to get justice.

Ammara reportedly requested the top court’s Registry in Lahore to send her back to her home country – the United States.

Outside the court, when she was asked the reason for her arrival; the lady said she wants justice from the top court.

Ammara claimed to have been kidnapped when she was young and that she was brought to Pakistan by force and asked the court to send her back.

One might have believed all her words until she claimed to walk down all the way from the US to Pakistan “surpassing many forests”.

She urged people not consider this a joke as she was a ‘serious person.’

The lady in Hijab said she wanted to make it clear that she was a Muslim by religion and those who are spreading false rumors regarding her religion must stop.

Now This Was Hilarious

This turned more interesting when Ammara told the TV reporter that her self-claimed father, Trump, had given all of her money to Pakistani politicians and now she wants the top court to help get her money back.

She said she misses her father [Trump] and Trump also misses her.

This woman from Pakistan claims to be Trumps daughter… 🤦‍♀️ pic.twitter.com/LkVI2iW7L2

Her video is making rounds on Twitter, where people are making different hilarious comments about her. One of the Twitter users, a doctor by profession, tweeted that the girl was mentally unstable and needed medical attention.

“She has manic disorder a character of bipolar disorder. The characteristic finding here is that she has racing thoughts, Shahbaz Sharif, India, Trump, billo, world on foot. These are unconnected thoughts. Plus she has delusions about trump being her father,” tweeted Fizan.