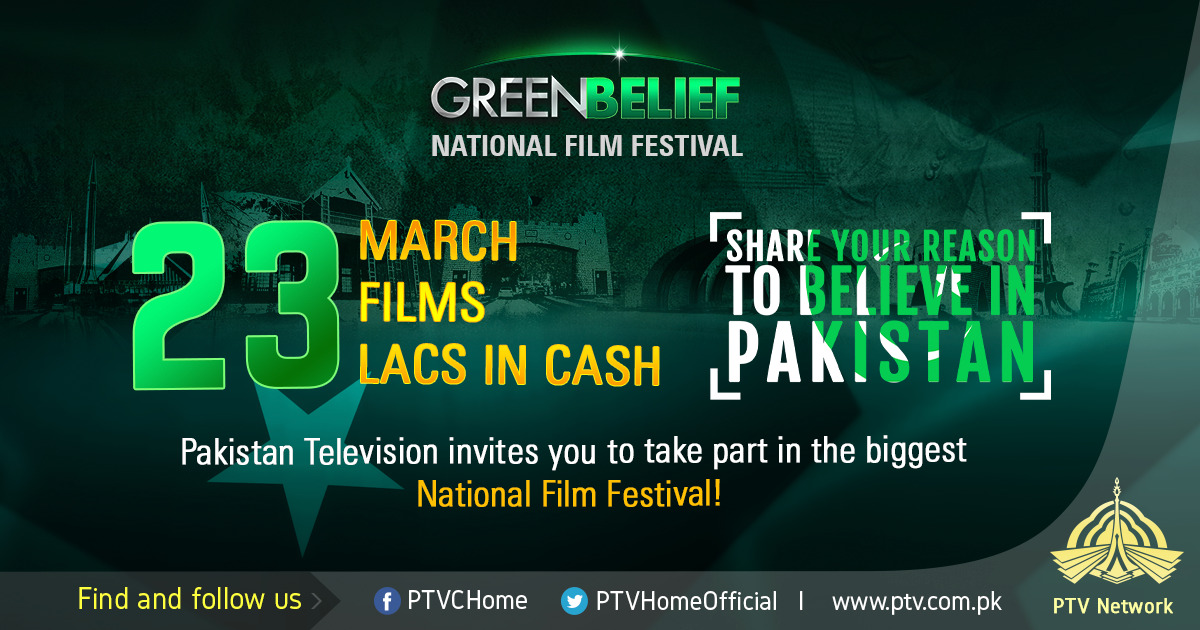 PTV has invited film makers to share 3 to 10 minute duration Short Films and Documentaries covering promising aspects of the thriving nation. The theme ‘Greene Belief’ symbolises the faith Pakistanis have been displaying in their country through thick and thin.

Filmmakers can document a success story of a Pakistani entrepreneur or any important aspect showing progress of Pakistan in any field like tourism, SME, social development, innovation, philanthropy, etc. The films can be based on inspirational fictional stories as well.

Announcing the ‘Green Belief’ National Film Festival, the Managing Director PTV Mr. Arshad Khan stated that as a state broadcaster PTV has always been playing the role of promoting Pakistan’s positive image worldwide. It is our national responsibility to instil hope and positive approach in the youth of Pakistan along with projecting Pakistan as a striving nation, he said.

From the tourism opportunities to the business avenues to the dedicated workforce Pakistan has so much to offer to the world. MD said that PTV hoped to receive such entries from the filmmakers that could strengthen the belief of the youth in Pakistan, its resilience, its strength and above all its talented people.

Connecting with the March 23 PTV plans to shortlist 23 films out which 20 will be telecast on PTV Network from March 13 to March 22 (two per day) and the top 3 will be televised on the Pakistan Day, March 23, 2018. The prize amount of Rs. 23 lacs will be distributed among the producers of the top three films as Rs. 10 lacs to the best film, Rs. 8 lacs to the second best and Rs. 5 lacs to the third best film.