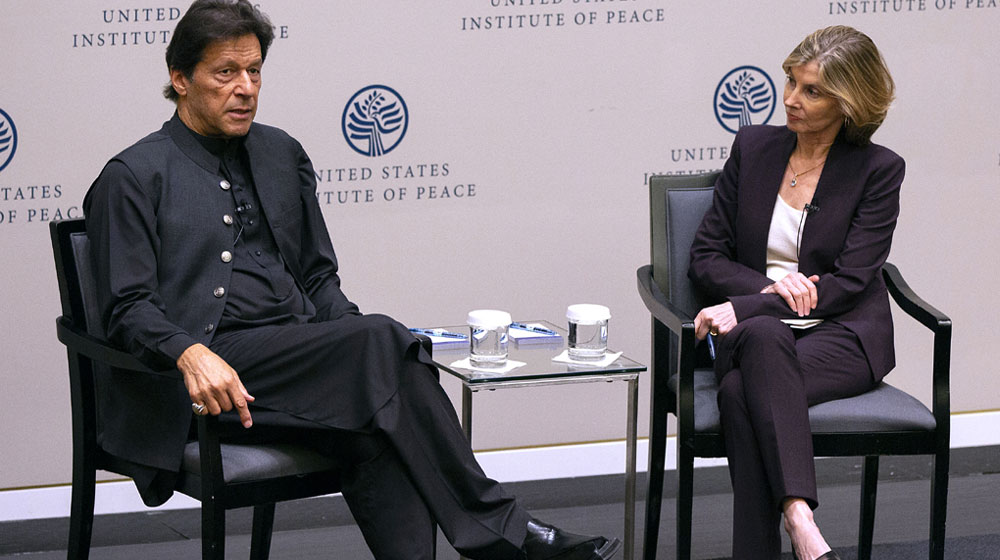 A day after meeting President Donald Trump, Prime Minister Imran Khan was invited by the US Institute of Peace on Tuesday.

Here are the highlights of his discussions at the USIP.

Khan had come to attend the session straight from the meeting with US Secretary of State Mike Pompeo. Banking on his interactions with President Trump and Pompeo, the premier said that he was hopeful to rebuild Pak-US relationship on the grounds of equality and friendship – contrary to what it had been in the past.

“The reason why I’m happy leaving the U.S. this time is that we have a relationship that is now based on a mutual interest, which is peace in Afghanistan.”

Prime Minister was adamant that the use of power in Afghanistan will never be a solution for the US and its allies.

But now, when I go back after meeting President Trump—and also, I’ve spoken to [Afghan] President [Ashraf] Ghani—now I will meet the Taliban, and I will try my best to get them to talk to the Afghan government.

The premier was very clear when he said that Pakistan wanted a politically stable Afghanistan as it was good for the country as well as for regional peace. He said that unlike his predecessors; the current government does not intend to interfere in Afghanistan’s internal politics.

I speak for Pakistan’s army in saying that we should not ever interfere in the internal affairs of Afghanistan. Let the Afghans decide what they want, and we should facilitate the peace process.

He also shared Pakistan’s narrative of peace with India and other neighboring countries. Khan said that what his country needs is stability which does not come without friendly neighbors.

I had assured Indian Prime Minister Narendra Modi that if he takes one step towards us, I will take two.

He highlighted that the biggest problem for Pakistan and India was poverty and maintained that the countries should give up war-hysteria and start trading with each other to curb this menace.

Khan urged that there was no military solution to Iran-US conflict. He emphasized that unlike Iraq [US invasion in 2003], Iran will prove to be an entirely different experience for the US and the world. The battle might end shortly, but its consequences will affect everyone for decades, and it will destroy the regional peace.

Hinting that Pakistan was not ready to be a part of the problem, he said that he was prepared to play the role of a mediator to ease out the tension between the two sovereign states.

Prime Minister Imran Khan said that he is the biggest supporter of Pashtun’s deprivations and their rightful demands from the government. “During my government,” he said, “We engaged with the protestors and tried to compensate them as much as possible.”

Khan highlighted that the war-ridden tribal areas had been made a part of the Khyber Pakhtunkhwa (KP) government and they recently witnessed their first-ever elections.

PM Khan maintained that military action against rogue elements in PTM was only taken after they enraged a mob and attacked an army post in the tribal areas.