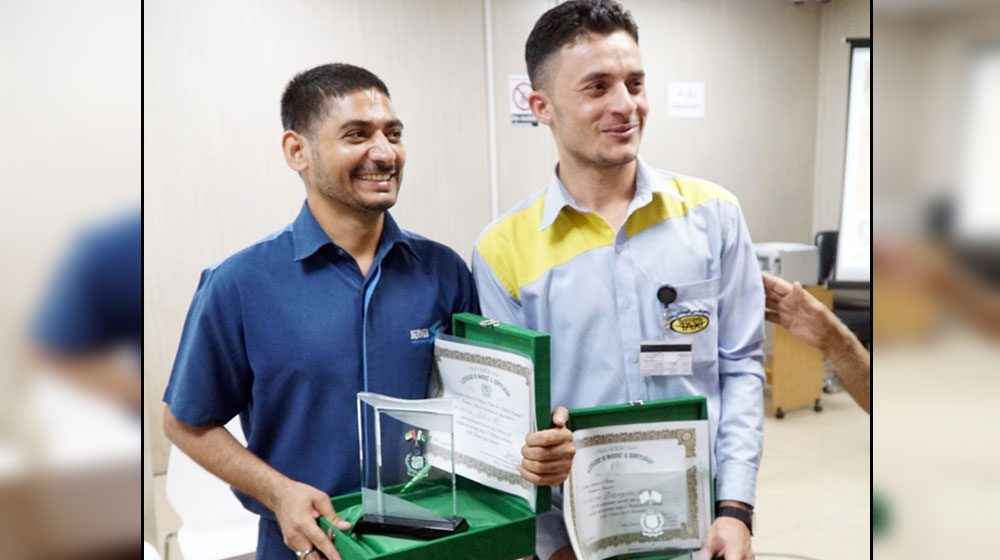 Two Pakistanis in Dubai were hailed as ‘heroes’ for returning a bag full of cash and gold to their respective owners. Both incidents happened this month.

They were honored and rewarded in front of a packed crowd at Pakistan Consulate in Dubai on Wednesday.

“They are our real heroes. They have made us and the whole country proud by their ethical conduct, and honesty. Many Pakistani nationals like them have made our country proud. I am sure what we are doing today will continue,” Ali said. He vowed to reward them with cash prizes in the future.

Taher Ali, who works with ServeU as a cleaner, found a bag full of gold from the parking area in the Al Sabkha area earlier this month. Without thinking twice, he informed the security guard who called the police and handed over the bag, who returned it to its rightful owner. The gold in the bag was estimated to be around 7 kgs and worth Rs. 30 million.

Taher said that he never had a second thought about what to do with the bag.

My father taught me honesty, truth, compassion, and how to care for people. I don’t want anything that doesn’t belong to me.

The 27-year-old belongs to Chakri area of Sialkot. He said that he was bombarded with congratulatory calls and messages from my friends back at home.

They were all thrilled and proud of my deed.

Dubai Roads and Transport Authority rewarded him with Dh 3,000, and his employer gave him Dh 4,000 as a token of appreciation for his honesty.

Another 24-year-old expat Shafaqat Khan from Khanewal returned a bag of cash. He has been earning his livelihood in UAE working as a taxi driver since 2018.

Earlier this month, Shafaqat found a bag full of US dollars in his taxi that belonged to a European family visiting UAE on summer vacations.

Here’s what he says about the incident:

When I dropped off the family at the hotel, I didn’t realize they had left their bag in the cab. I later saw the bag full of cash when I was getting ready to go home. I immediately informed the police, and they rewarded me with a mobile phone for my honesty.

With a broad smile on his face, Khan said that Allah had rewarded him with enough that he never had to steal anything of anyone.

His employer appreciated the gesture with an award of Dh 1,000.