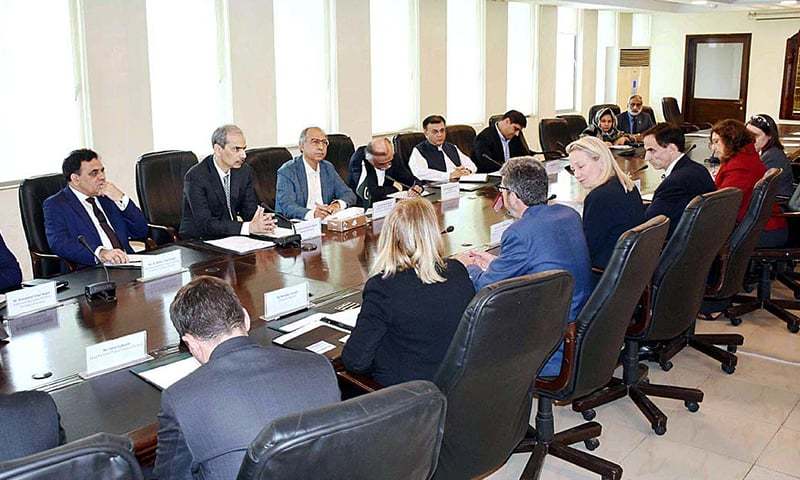 The Adviser to Prime Minister on Finance and Revenue, Abdul Hafeez Shaikh on Tuesday briefed the United States (US) visiting delegation on measures pertaining to economic reforms being undertaken by the Government of Pakistan to ensure economic discipline.

A US delegation led by Ambassador Alice G. Wells, Acting Assistant Secretary of State for the Bureau of South and Central Asian Affairs, along with the US Treasury officials comprising Scott Rembrandt, Deputy Assistant Secretary, Grant Vickers, David Galbraith and others held a meeting with Adviser to the Prime Minister on Finance and Revenue Abdul Hafeez Shaikh, yesterday at Finance Division, Islamabad.

Hafeez highlighted the government efforts being made towards implementation of Financial Action Task Force (FATF) Action Plan and the key challenges being faced, said a press release issued by Ministry of Finance.

He emphasized the importance of bilateral engagement with the US and the need to encourage entrepreneurs from the private sector of both the countries which will lead to enhanced trade.

The Adviser informed that over the past three months, the government has taken significant steps to bring financial discipline that includes reduction in the current account deficit, focus on increasing revenue generation, measures to reduce fiscal expenditures, reduce fiscal borrowings, efforts to enhance foreign exchange reserves through bilateral and multilateral support, arrangement of petroleum credit facility with Saudi Arabia and Islamic Development Bank and IMF Program.

As part of its institutional development initiative, State Bank of Pakistan (SBP) and Federal Board of Revenue (FBR) are being resourced and empowered.

At the same time, to support economic growth and facilitate the people below the poverty line, various programs to support Pakistan’s export oriented industries and health insurance schemes have been introduced for the poor.

Regarding, implementation of FATF Action Plan, the Adviser briefed that the government is ensuring all-out efforts to complete the Action Plan, involving all relevant authorities at the federal and provincial levels, supported by capacity building through international partners.

The Adviser expressed the government’s commitment to enhance the effectiveness of its AML/CFT (Anti-Money Laundering and Combating the Financing of Terrorism) Framework, with the objective to ensure that all the actions that are being taken to curb Terror Financing are irreversible and sustainable.

An official, who has been part of Pakistan’s team interacting with the FATF and Asia Pacific Group (APG) over the past year, said Islamabad had taken significant steps since the FATF meetings in June.

Hafeez urged for the continued support of the international community to strengthen the AML/CFT Framework over a longer period of time.

Alice G. Wells appreciated the briefings and expressed that the US would continue to remain engaged with Pakistan in its economic reforms efforts and help build an environment that facilitates business development between the two countries.