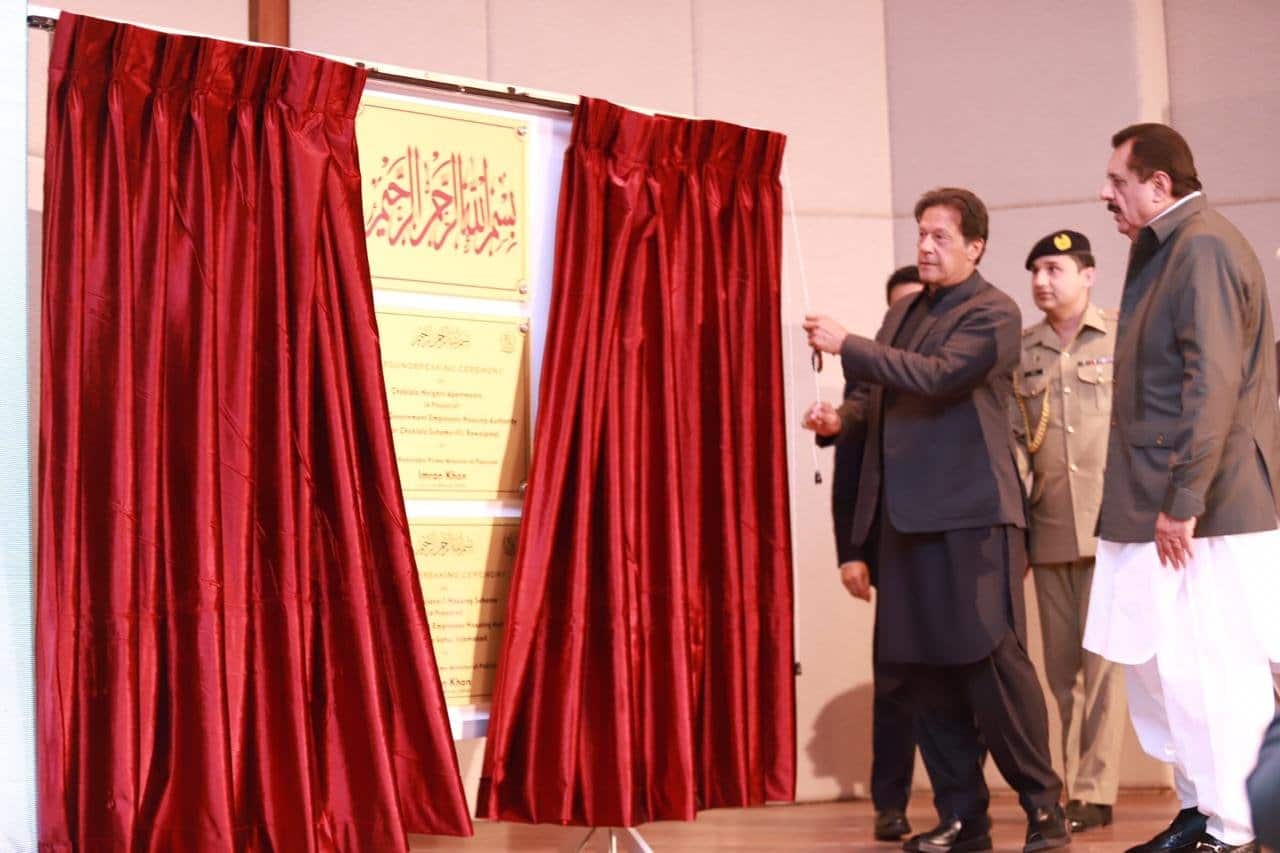 Prime Minister Imran Khan has laid the foundation stones of seven housing projects, envisaging construction of 20,000 housing units at a cost of Rs. 100 billion in Islamabad.

Under the Prime Minister’s vision, these projects will not only provide residential facilities to people who do not own any but also boost the construction sector in the country and create job opportunities.

Speaking on the occasion, the prime minister said the government had undertaken huge efforts for the construction of five million houses in the country as the initiative drew criticism from the political opponents.

This is just the beginning. These 20,000 housing units are part of the Pakistan Tehreek-e-Insaf’s vision to build five million housing units across the country. We are determined to achieve this goal. But now after the breakthrough and path-finding, the journey had started towards realization of that initiative.

The prime minister also expressed his pleasure over the decision of Lahore High Court regarding the foreclosure laws and said the judgment will bring a revolution in the housing sector through increased financing by the banks.

In the West, he said, bank loaning facility is provided for the construction of residential houses at affordable rates. The percentage of mortgage facility for housing in Pakistan stands at a mere 0.2% compared to 80% in the United States and the United Kingdom, 30% in Malaysia and 12% in India.

The prime minister said that as inflation had started easing out, it would also bring down interest rates.

All the figures show that inflation is going down, and the interest rates will also gown down.

In line with the government’s vision of ease of doing business, all impediments in the way of the construction industry had been removed, and that is why the FGEFH was made an authority through legislation.

The prime minister said that as the government employees, particularly the class four employees and police personnel, cannot construct their own houses with limited salaries, the government can arrange bank financing for them.

The previous governments never paid attention to this in the past. Affordable housing will also benefit 40 industries allied with the construction sector, creating job opportunities and pushing economic growth.

Describing 2020 as the year of economic growth and job creation, the prime minister said cities are being expanded which gave rise to serious issues like pollution, lack of basic facilities and food security. The government had decided to implement master plans for the urban areas, he added.

As Karachi had been turned into a concrete jungle, Islamabad expanded up to Murree and green areas vanished from Lahore, the solution is the promotion and encouragement of vertical construction instead of horizontal buildings, for which laws had been relaxed.

Imran Khan said that income from the multi-billion rupees commercial projects like the one launched in Islamabad for the construction of new Blue Area and others to be initiated in Lahore and Karachi soon will be spent on the construction of housing facilities for the people in slum areas.

He also mentioned and appreciated the housing projects initiated by the “Akhuwat Foundation”, a non-governmental organization (NGO) for low-income groups.

The prime minister recalled that before coming to power, he was shocked reading the news about a government employee who committed suicide so that his house was allotted to his son after his death, according to the government rules.

He said the provision of basic facilities, including the housing facility, to the people particularly the poor ones was the responsibility of the state.