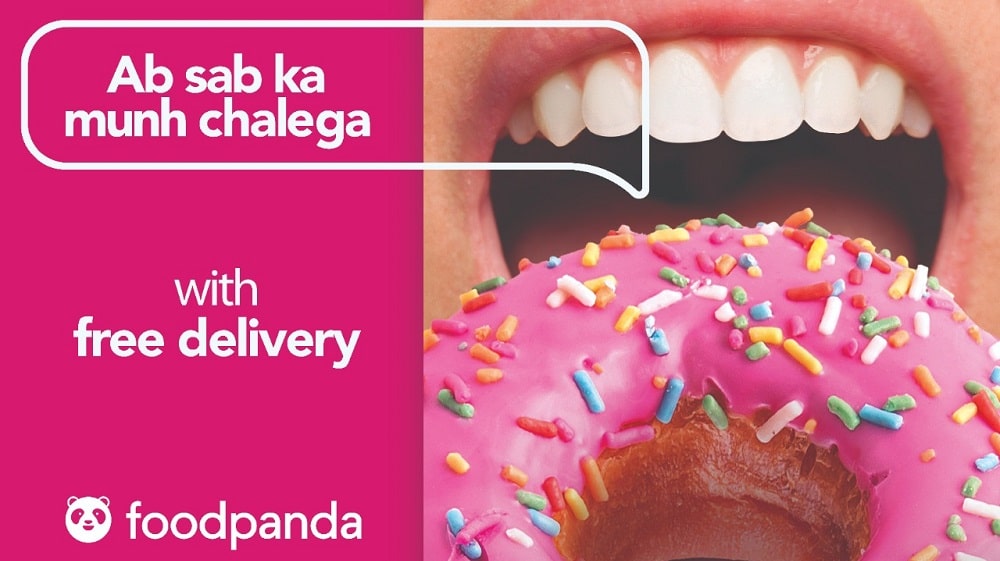 Established in 2012, foodpanda has become synonymous with great seasonal deals and creative campaigns around the country. With the addition of ‘ghar ka khana’ feature on the app, people can now also enjoy tasteful homemade food easily, anytime and anywhere. To celebrate that and another cricket season Sabka Munh Chalega – foodpanda’s latest campaign is creating much chatter and rightfully so.

#SabkaMunhChalega is a play on the ‘munh chalaana’ which means talking too much. The food delivery giant localized the term to ‘eating too much’. The term is the perfect description for the cricket season where consumers can avail up to 70% off on 2000+ eateries. Not just that, but now foodies can satisfy their hunger for a home-cooked meal with the latest addition to the app, ‘ghar ka khana’. Translated to food from home, this feature highlights home-cooked and smaller business ventures on the application by giving them a platform to sell directly to their consumer.

Some of the Karachi deals include; flat 30% discounts from Slamwich (S.M.C.H.S), Hoagies (DHA), Greeno Juice Bars (Sunset Boulevard), Spice (Gulshan-e-Iqbal), Eaton and Del Frio (Boat Basin). A flat 40% discount can be availed at Vanelli’s, flat 60% off on Day Night Pizza (FB Area), flat 25% off on Boxers, flat 20% off at Burger O’ Clock (Gulshan-e-Iqbal) and flat 50% off on the entire menu of Wok Express (DHA).

Food lovers in Lahore can avail discounts from a variety of restaurants including a 15% discount from Tandoori Flames & Grill, a 20% discount at Jumbo Gyro (Cavalry), flat 25% discount on the entire menu of Lahore Deli and flat 30% off at Figaro’s. Other than discounts, some incredible deals include a Special Fajita Pizza from Domino Hut for Rs 149, a Karizma Small Pizza from Fri- Chicks (Anarkali) for Rs. 449 and a plate of Chicken Qorma with Raita, 2 Rotis and soft drink from Golden Mutton Chaana for just Rs. 150.

Islamabad foodies can make the most of a flat 40% discount on the Entire Menu of Lokal Eatout (F-11), flat 30% off on Wild Wings and Maizbaan Tandoori, flat 40% off from Tayto (F-11), Rewayat and Keranche. Along with this, Tomatino Pizza Fiesta and Grill House have flat 50% off, China Bowl flat 55% off and a special offer for only foodpanda customers is that of a 9-inch pizza and a 500ml drink for only Rs. 250.

With this campaign, foodpanda is not only limited to major cities around Pakistan, but the company has now started to branch out to different cities as well including Jhelum, Sahiwal, and Sheikhupura. Expanding into different regions will not only be beneficial for the customers, but also for employment in these three cities. The expansion will also on-board more riders to be part of the foodpanda heroes’ family. The riders operating at the three cities will be provided the same perks and benefits as those in other parts of the country which includes rider insurance, face masks, safety helmets, safety jackets and reduced working hours

With the three creative digital video commercials released earlier this week that highlight the ‘Sabka Munh Chalega’ idea in three different hilarious, yet relatable scenarios, the campaign is one of the biggest foodpanda has done in 2020 so far. This year, rejoice with new deals and enjoy the cricket season only with foodpanda Pakistan!