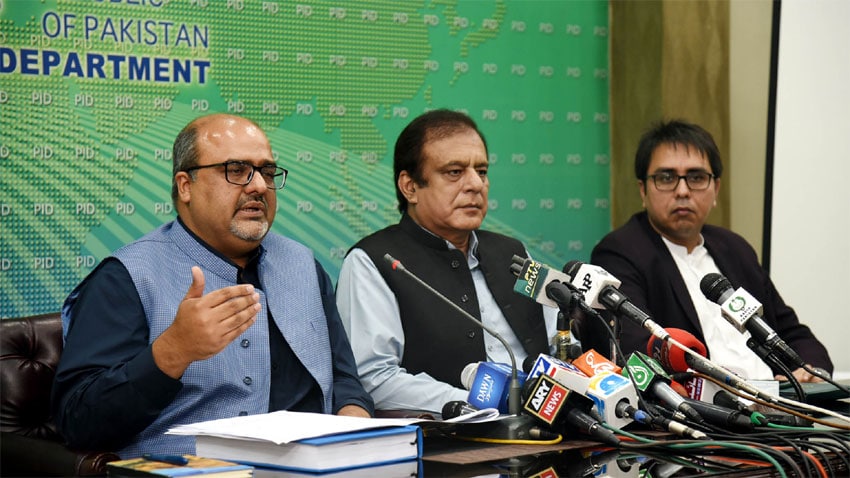 The much-awaited sugar inquiry commission’s report has been public by the government after the approval of Federal Cabinet.

Information Minister Shibli Faraz, while giving a briefing to the media, said the PTI government is firmly committed to accountability and transparency in governance. He said, “No investigations have ever been conducted over matters such as these, nor has any government shown the courage to make such investigations public.”

The commission’s report, he said, proved what PM Imran Khan had always maintained that “whenever a businessman comes into politics, he will always do business even at the expense of the poor.”

This resulted in cost inflation and many other corporate frauds have been detected in the transactions of sugar mills.

According to the report, sugar mills were acting like a cartel and engaging in massive malpractice like:

Shahzad Akbar said Commission also found irregularities in the form of giving advance payments to farmers in the form of cash or commodity, which is akin to unregulated banking. He said six big groups of Pakistan had 51 percent share of sugar industry and forensic audit of these mills was done by the commission.

He said that a subsidy of Rs. 29 billion was given to sugar industry in the last five years. It was found that total income tax of around 88 sugar mills of the country is Rs. 10 billion after getting a tax refund.

Mills paid income tax of Rs 22 billion during this period, of which they got back Rs. 12 billion as refunds which means only Rs. 10 billion went to the national exchequer.

The Commission of Inquiry selected the following mills and constituted 9 teams to carry out a forensic audit.

Despite the limited time available to the Commission and the resource constraint, a reasonably large representative sample of the total sugar industry in the form of the above-mentioned sugar mills was selected.

Speaking on the occasion, Special Assistant to Prime Minister on Accountability Mirza Shahzad Akbar said Sugar Inquiry Commission was established to ascertain the reasons for increase in sugar prices in the last few years.

He said the commission also found irregularities in the form of giving advance payments to farmers in the form of cash or commodity, which was akin to unregulated banking and they earned up to 35 percent profit on the loaned amount.

He said the audit of Alliance Sugar Mill from Rahim Yar Khan partially owned by Pakistan Muslim League- Quaid (PML-Q) senior leader Moonis Elahi, showed that between 2014 to 2018, it made a systematic cut of 11 to 14 percent of the amount it owed to the farmers, which translated to Rs. 970 million.

It was was a huge blow for the farmers. The said mill under-reported its sales for several years and sold sugar to unnamed buyers, he said, adding the inquiry report mentioned violations of the Pakistan Penal Code committed by the mills.

Mentioning the JDW Sugar Mills in which Jahangir Tareen owned 21 percent shares, according to the report, the mill management was involved in double booking, under-reporting, and over-invoicing. It under-invoiced sales from bagasse and molasses, which resulted in 25 percent cost inflation. The mill was involved in forward sales, satta and benami sales.

He said the Al-Arabiya Sugar Mills owned by Salman Shehbaz Sharif was also audited, which found to be involved in a fraud of Rs. 400 million through informal receipts and market manipulation.

Shahzad Akbar said the report revealed that certain sugar mills used informal receipts and it was ultimately the farmer, who was crushed because there was no official record. The mill owners showed the price of production to be more than the support price which meant that farmers earned less than the support price.

Similarly in 2018-19, the sugar mills gave the cost price of one kg at Rs 52.60 while according to the report the estimated cost was Rs 40, he added. He said the report also pointed out that the sucrose content as shown by the Pakistani mills owners (9.5% to 10.5%) was less than the international standard.

He said on the one hand, the inflated cost of production and market manipulation were being done and on the other, accounting fraud was also being committed by the sugar mill owners.

About the market manipulation, the report says there is ample evidence of market manipulation for profiteering by certain sugar mills through forward contracting, non-lifting of sold sugar and facilitation to the selected brokers who indulge in “Satta”.

Shahzad Akbar said the report of the commission had also shown that the mill owners were maintaining two account books – one for the government and the other for themselves. There was an under-reporting on sugar procurement up to 25-30 percent, which was a scandal as no tax was evaded because of that factor.

He said the report revealed that the Omni Group in Sindh had specifically benefited from the subsidies given by Sindh Chief Minister Murad Ali Shah. The Omni Group was already getting subsidies from the Federal Government, but the Sindh Government gave it additional subsidy.

The SAPM said the inquiry commission headed by Director General of Federal Investigation Agency Wajid Zia, in its forensic audit report, had recommended strengthening the regulatory framework and pushing the regulators to perform their assigned duties.

The commission noted that the failure of regulators right from the role of Sugarcane Commissioner up to policy making level was quite obvious, and recommended to rectify the gaps and shortcomings in that regard.
Any fraud in sales tax by a sugar mill was impossible sans the connivance of Federal Board of Revenue (FBR) representative deployed at its premises, added Akbar.

The delivery, sales and purchase mechanism of sugar mills should be regulated as no authentic record of their sales, exports, purchases or even production was available. Shahzad Akbar said the cabinet decided that looted money should be recovered from the sugar mills and recommendation for a mechanism in that regard would be finalized after Eid ul Fitr.

He said the commission had determined the price of sugar by giving sugar mill owners 15 percent margin of profit. The mills were looting the farmers by showing 15 to 30 percent less weight of the sugarcane on the receipts of purchases, which were also not in proper form.

According to the report, the quantum of sales transactions booked/invoiced to unregistered person by six sugar mills under forensic audit amounts to Rs. 150,217,451,253, which is 72% of total sales value during the aforementioned period. 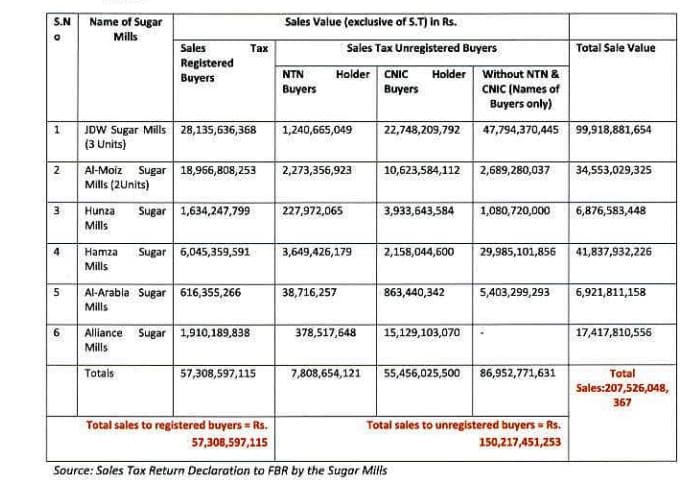 Over 100 billion earned by the sugar mafia

Akbar said over 100 billion was earned by the sugar mafia as windfall profit by market manipulations during the current year. Most of the sales were benami, including in the names of truck drivers and others to devour taxes. Most of the mills committed fraud in the sale tax payments.

The SAPM noted that the crushing capacity had been enhanced by various mills without getting approval from the relevant authorities.

Akbar added that 68 percent sugar was exported to Afghanistan but the data of Pakistan and Afghanistan did not match. He elaborated that the weight lifting capacity of a truck was 15 to 20 tons whereas the sugar mills invoices showed that each truck carried some 70 to 80 tons sugar to Afghanistan. The payment to sugar barons was done from Afghanistan through telegraphic transfers, he added.

He said the commission had recommended a thorough probe into the sugar export to Afghanistan.

The report stated that the Competition Commission of Pakistan had ample prior instances that provided the queue for taking preemptive actions. The last action of the CCP in respect of sugar mills was in 2009.

During the price hike of sugar in 2019, no intervention was made by the CCP to address the abuse of market dominance, and/or anti-competitive marketing practices despite extensive powers conferred under the Competition Act, 2010.

The record sought from the SECP revealed that the books of accounts and financial statements of the mills were not reviewed, checked, examined, inspected, or investigated by the SECP