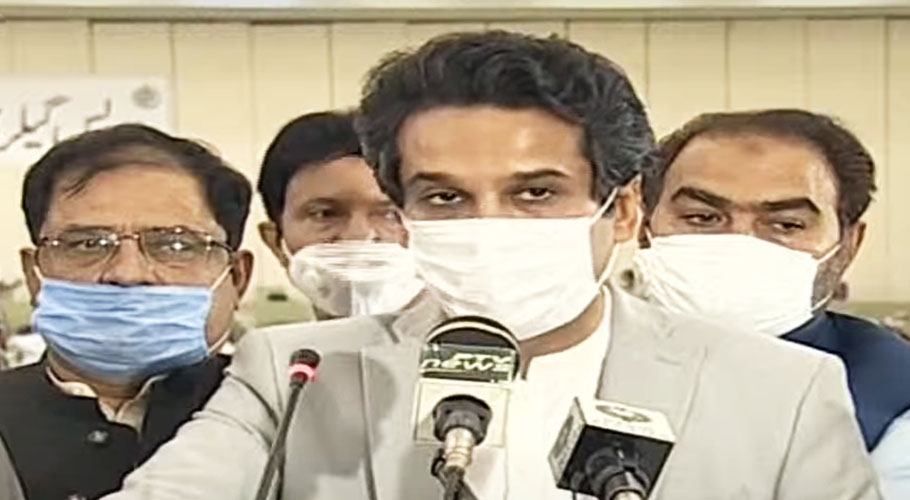 Provincial Finance Minister Makhdoom Hashim Jawan Bakhat has presented an austerity based tax-free Punjab budget for the financial year (FY) 2020-21 with a total outlay of Rs 2.24 trillion in the provincial assembly, including Rs. 337 billion, for development. 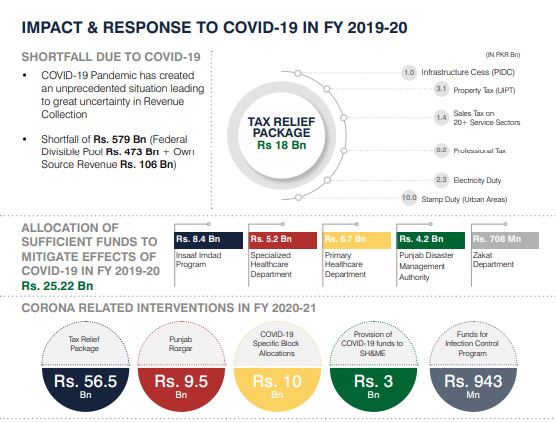 The timely distribution of cash grants under Social Protection to the marginalized segments of society was ensured.

The highlights of Budget 2020-21 are fiscal discipline, the impetus to the economy, prudent austerity, participatory budget making, and Framework for Rolling Expenditure control for efficient spending throughout the year. Social sector spending for the welfare of the people of Punjab and tapping private investments by means of Public-Private Partnership are envisaged and made an integral part of the Budget

Terming the provincial budget as progressive and pro-business in the given circumstances, Hashim Jawan Bakhat added that on-going expenditure for the next FY has been estimated at Rs. 1318 billion containing Rs. 337.6 billion for salaries, while Rs. 337 billion has been allocated for development expenditures, Rs. 128.40 billion for capital expenditure, and Rs. 125 billion as estimated provincial surplus.

The finance bill also estimated Rs. 133 billion from the donor agencies during the fiscal year 2020-21.

Hashim said that the government of Punjab is announcing a Rs. 56 billion tax relief package which is the biggest in the history of Punjab.

He said that 16 percent and 5 percent tax will be charged respectively from customers who pay through cash and debit cards at restaurants and beauty parlors, adding that it will help document the economy.

During the next FY, he said, the property tax can be paid in two installments and those who pay full tax till September 30, 2020, will be given 10 percent rebate instead of five percent and there will be no surcharge on tax on them during FY 2020-21.

Some of the major initiatives of the government 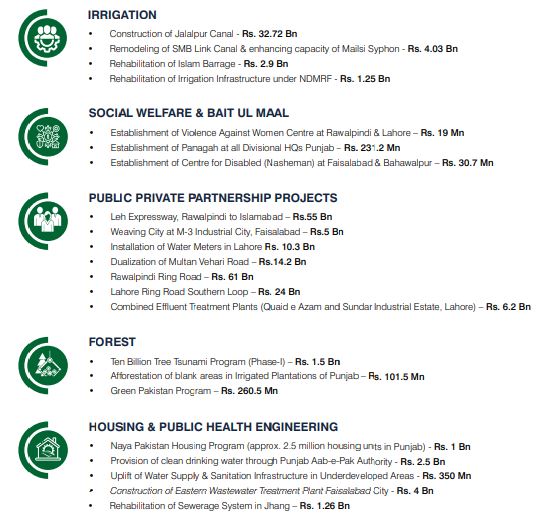 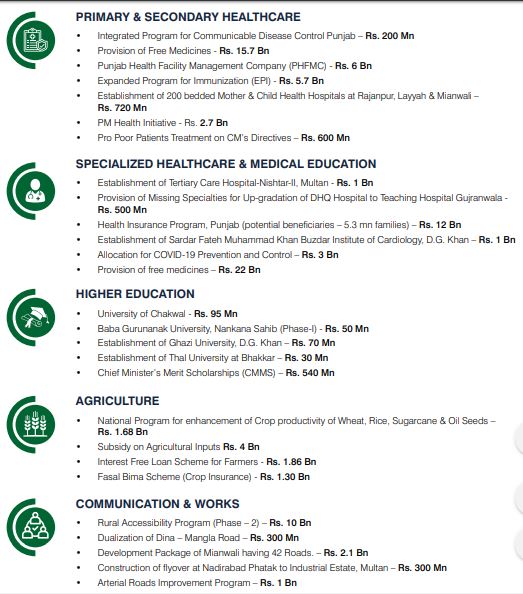 The Punjab provincial government also decided not to give any salary raise to the government employees or any increase in pension. Four percent tax was imposed on online taxi services. However, tax from 11% to 16% was reduced on more than 20 services. Also, the entertainment tax was abolished on cinema houses.

The government has also reduced Service Delivery Expenditures by Rs. 10 billion and increased the local governments’ budget by Rs. 10 billion, he said and added that it was also proposed to save more than Rs. 19 billion through Pension Reforms.

The budget includes Rs. 106 billion for coronavirus relief, out of which Rs. 50 billion has been allocated for direct expenditure. One additional salary for health workers has also been approved.

The health sector was allocated Rs. 284.20 billion, out which Rs. 250.70 billion were for recurring expenses, while Rs. 33 billion reserved for development work. He said that in order to control Covid-19, the government earmarked Rs. 13 billion, while the medicine procurement target has been increased to Rs. 26 billion from Rs. 23 billion this fiscal.

For specialized healthcare, the government allocated Rs. 6 billion, which will be utilized to provide missing facilities in various district headquarters hospitals.

To augment the shortage of health services human resources that include doctors, nurses, and other paramedical staff, the Punjab government has recruited 12,000 professionals that the minister hopes will be adequate to handle the current health affairs. For the Health Insaf Cards, the government has allocated Rs. 12 billion. This scheme is currently benefiting five million families. The budget for Punjab Primary Healthcare has been enhanced to Rs. 11.46 billion.

For the Health Insaf Cards, the government has allocated Rs. 12 billion. This scheme is currently benefiting five million families. The budget for Punjab Primary Healthcare has been enhanced to Rs. 11.46 billion.

For the education sector, the government of Punjab has designated Rs. 391 billion, out of which Rs. 357 billion related to recurring expenses and the rest is for development work. The allocation for the School Education Department is Rs. 350.10 billion.

Out of this, 27.60 billion is part of the development program. For school councils, Rs. 13.50 billion has been earmarked while Daanish schools will get Rs. 3 billion. An amount of Rs. 22 billion has been reserved for schools being operated under the public-private partnership.

For higher education, the Punjab government will provide Rs. 37.56 billion to the Higher Education Department, out of which Rs. 3.9 billion are for development projects. It includes the establishment of seven universities in different districts of Punjab.

The cumulative agriculture budget for Punjab is Rs. 31.73 billion.

The finance minister said that locust threat is a very critical situation for the agriculture sector and the federal government is mainly looking after measures to eradicate it. However, the Punjab government intends to earmark Rs. 4 billion to tackle locusts, out which Rs. 1 billion will be given to the Provincial Disaster Management Authority (PDMA).

Makhdoom Hashim Jawan Bakhat said that 20 percent instead of 10 percent rebate will be given upon payment of full Registration and Token Tax of vehicles, and a five percent Special Discount will be given on online payment through e-Pay Portal.

Board of Revenue is eying Rs 20 billion revenue from the lease of state lands, rental and sale etc. Under Land Utilization Policy. In this connection, amendments in the Land Revenue Act 1967 will soon be passed.

It has been proposed in the next FY budget to bring down the Stamp Duty ratio from five to only one percent that will promote the construction industry and help generate employment.

As per vision of Prime Minister Imran Khan and Punjab Chief Minister Sardar Usman Buzdar, he said that fee on business licenses fall in the ambit of local governments has been brought to zero to ensure ease of doing business. It will not only help promote economic activities but also ensure tax relief worth Rs. 600 million to local populations, he concluded.