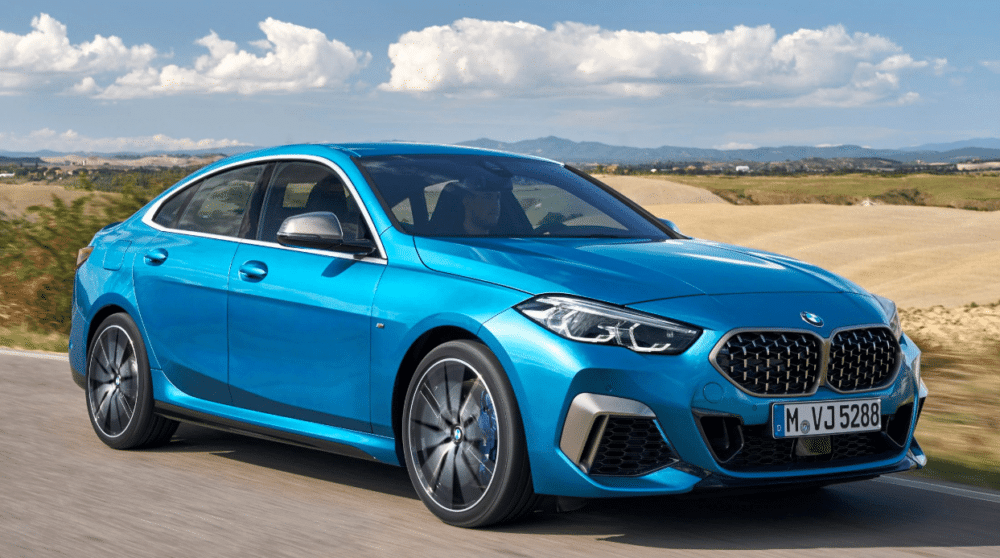 BMW Dewan Motors has announced via one of its social media accounts that the new 2-series Gran Coupé is now available in Pakistan and that it will be placed on display at the Park Towers Showroom in Karachi from July 1st to July 7th.

The 2-series Gran Coupé is a compact 4-door coupe that carries influences from the design of a flamboyant coupe and the practicality of a sedan. The car will be made available in 4 variants, i.e. Advantage, Luxury Line, Sport Line and the M Sport model, which is a top-end variant for Pakistan.

BMW has made some bold changes in terms of their overall design language, which has received rather polarizing reviews from people all over the world. The new 2 series features the same new design language with the most prominent feature being the huge kidney grill on the front.

The M-sport version in particular, features a more angular front bumper with huge vents and air-scoops to improve the aerodynamics. The headlights are the all new BMW LED Laser headlights that provide fantastic visibility even in pitch black. The remaining variants are, although generally the same in terms of profile, still much more subdued as compared to the M Sport.

The side profile seems a bit busy with various lines and creases that are not quite in symmetry. The wheels are 19 inch alloys that give the car an prominent stance on the road. The entry level versions get 18 inch alloys as standard. Beneath the doors are some sporty looking side skirts that enhance the side profile of the car. However, the car does also have frameless doors that add to the sportiness of the design.

Around the back, the design is quite modern and elegant, there’s a tiny lip-spoiler on the boot-lid, with sleek taillights. The rear-bumper features 2 air-vents on the side and 2 reflectors in the middle. On the M Sport version, at the bottom, the bumper also features 2 exhaust surrounds for the dual exhaust and a wind diffuser in the center.

In terms of interior build quality, BMW always gets rave reviews from the owners and the automotive journalists all over the world for their solid feel and finish. In terms of design however, the interior looks a bit dated as compared its main competitor i.e. the Mercedes-Benz A-Class or the CLA.

With the M-Sport version you get a bunch of extra features such as a bigger infotainment screen, fully digital gauge cluster, multi-way electronically adjustable seats, paddle shifters and various other leather upholstery options.

On the top of the line, there’s the M-Sport version that features a 2.0 litre 4 cylinder turbocharged petrol engine that makes 306 horsepower and 450 newton-meters of torque. This engine is also mated to a 8-speed automatic gearbox and does 0-100 km/h in 4.8 seconds, although some have reported 0-100 km/hr times of as low as 4.4 seconds.

With M-Sport, you also get BMW’s xDrive All-Wheel Drive system that allows for a quick and punchy launch, sports steering, brakes and suspension for agile handling and optional adaptive dampers that function intelligently as according to the road surface and suspension settings.

The price of the car has not yet been made public, but, knowing that its a premium product from a premium brand, the price should be quite steep. However, for those who can afford to buy it, given its built quality, performance statistics and tech-features, this car definitely should be at the top of their options list.