State Bank of Pakistan (SBP) has issued a detailed progress report on banks’ performance on Rozgar Refinance Scheme with Risk Sharing Facility. Under the Scheme, up till 10th July 2020, financing of Rs. 125.9 billion has been approved by banks for 2068 businesses covering wages and salaries of over 1.2 million employees in order to counter the negative impact of COVID-19 on the economy.

The scheme provides concessional financing to businesses for wages and salary expenses, provided they commit to not lay off their employees for the period of the loan.

The scheme was later complemented by a Risk Sharing Facility (RSF) for SMEs and Small Corporate with a turnover of up to Rs. 2 billion.

Under this facility, the federal government bears up to 60 percent of first loss on the principal amount of the disbursed portfolio for SME borrowers whereas 40 percent risk coverage is available for small corporates.

The objective of this facility is to incentivize banks to extend loans to SMEs and small corporations, to whom they may not cater to risk considerations. Initially, the scheme was available till the end of June 2020, however, seeing the COVID-19 pandemic situation, SBP decided to extend the validity of this scheme by another 3 months to Sept. 2020.

Soon after the introduction of the scheme, a large number of applications to avail financing were received by banks but their approvals remained slow. However, with the efforts of SBP, banks streamlined their processes and the pace of loan approvals increased.

At the end of April 2020, only 18% of loan applications were approved. This has increased to 76% by 10th July 2020. Similarly, the number of loans approved against the requested amount also improved. The acceptance ratio for the amount of financing increased from 26% at the end of April 2020 to 82% on 10th July 2020. Consequently, the number of employees benefitting from the scheme in terms of acceptance ratio has also increased from 26% to 85% during the same period

Relative to the initial situation related to the Rozgar scheme, in terms of processing and approving the requests for financing, banks performed better under RSF and improved further over time.  The acceptance ratio, both in terms of the number of applications and the amount increased from 35% and 37% respectively on 15th May 2020 to 72% and 71% on 10th July 2020.

Following similar trends, the total number of employees benefitting from the acceptance of financing requests increased from 36% to 75% during the same period.

However, in terms of processing the number of applications and financing only a few banks performed well.

Among the top-performing banks, for both, JS Bank Limited, Habib Bank Limited (HBL), Bank Al-Habib Limited, Bank Alfalah Limited and Askari Bank Limited have contributed the highest in terms of both approving the number of applications and amount since the beginning of this scheme (RSF) till 10th July.

These five banks provided Rs. 18.1 billion or 58% of the overall approved financing amount eligible under SBP Rozgar Scheme up till 10th July.

Their share declined from 61% earlier on 12th June 2020 showing that other banks have improved their performance. Their individual performance is also reflected from the fact that the cumulative approved financing by these banks ranged from Rs. 2.2 billion to Rs. 4.6 billion. The rankings of these banks have remained unchanged since the inception of the RSF till 10th July 2020.

In contrast, the least performing banks comprise Bank Islami, MCB Bank, First Women Bank, Standard Chartered Bank (Pakistan) Ltd., and Bank of Khyber. In these banks both the number of applications and amounts approved are very low, ranging in meager 7 to 29 and Rs. 103 million to Rs. 389 million, respectively up till 10th July 2020. Among these banks, there was some improvement as a major bank, NBP, exited the list and was replaced by Bank Islami. 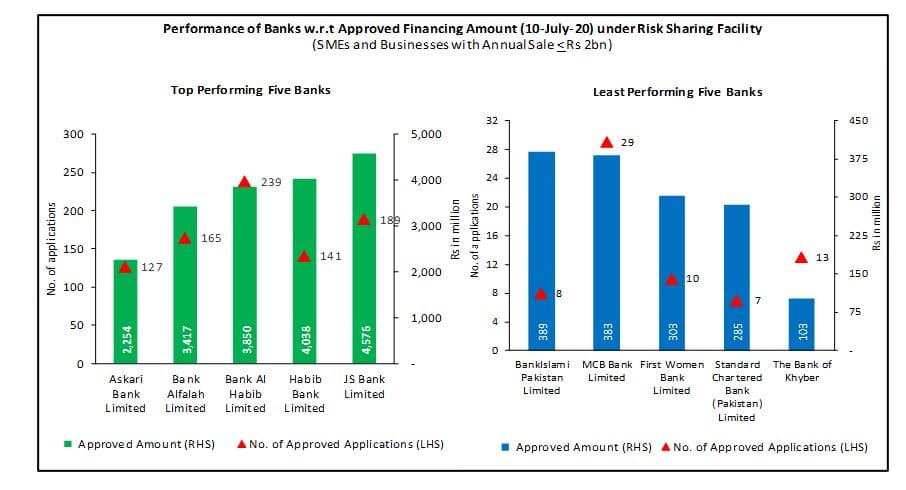 Performance of Banks in Acceptance Ratios

In terms of acceptance ratios for the amount and number of applications approved for financing, JS Bank, HBL, Bank Al-Habib, Bank Alfalah, and Askari Bank, continued to remain among the top five. The acceptance ratios of these banks were in the ranges of 62% to 86% and 65% to 89%, respectively. Their rankings, however, changed within the group except for JS Bank Limited that remained at the top throughout.

Among the least performing banks, NBP, UBL, MCB, and Standard Chartered Bank Limited continued to remain in this group. Their acceptance ratios were also in the similarly low in ranges of 19 percent to 41 percent and 13 percent to 57 percent, respectively. Only ABL exited the list improving its position and was replaced by the Bank of Khyber.