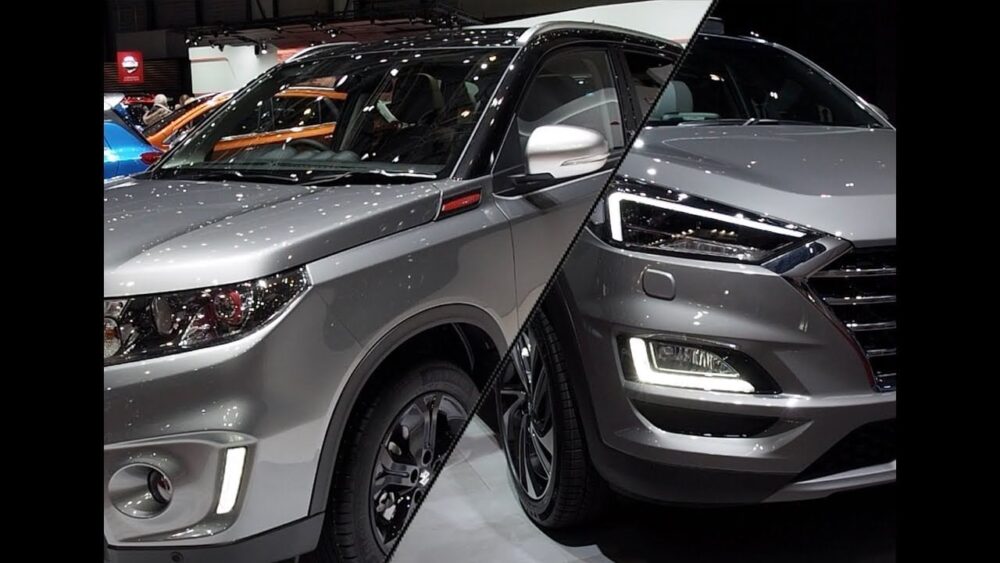 In recent times, Pakistani automotive industry has had quite a few eventful instances, of both, good and bad nature, such as the launch of multiple new cars, a massive slump in car sales due to lockdowns, multiple price hikes by virtually all automakers, a few new car launches on the horizon and so forth. However, amid all the bustle, a nice new segment of compact crossover SUVs has emerged that seems to be taking the Pakistani car industry by storm.

The most recent addition to this segment is the Hyundai Tucson. The new SUV is a reincarnated version of the Kia Sportage, as it has a different style and appearance, but both cars are nearly identical in terms of performance and features. Not to say that its a bad thing because the Sportage is also a decent vehicle with a fair few modern features that can be had for a reasonable price. Given that, Tucson is likely to get a lot of attention like the Sportage as well.

However, there is another compact SUV in the market that demands the attention of those shopping for a Compact SUV. That car happens to be the Suzuki Vitara. The Vitara was launched in Pakistan back in January of 2017 in 4th Generation form. The car was initially offered in two variants, i.e. the base Vitara GL+, and the advanced Vitara GLX version. Now it is only offered in the latter form.

Furthermore, the Vitara is comes in a Complete Built-up Unit (CBU) form from Hungary whereas the Hyundai comes in a Complete Knock Down (CKD) form from Korea and is assemble here in Pakistan. A common perception is that the CBU’s vehicles are usually better in built quality than the CKD vehicles, but nothing can be said in that regard as of right now since the Tucson is still relatively new in the market.

Whereas the Tucson is offered in 2 variants, i.e. the base GLS sport version with a Front Wheel Drive (FWD) drivetrain, and the Ultimate version with an All Wheel Drive drivetrain. Even though the price tags of both cars are almost similar, there are quite a few differences in other regards. So in order to help you decide which car you should take home, here’s a comparison of the Suzuki Vitara and the Hyundai Tucson: 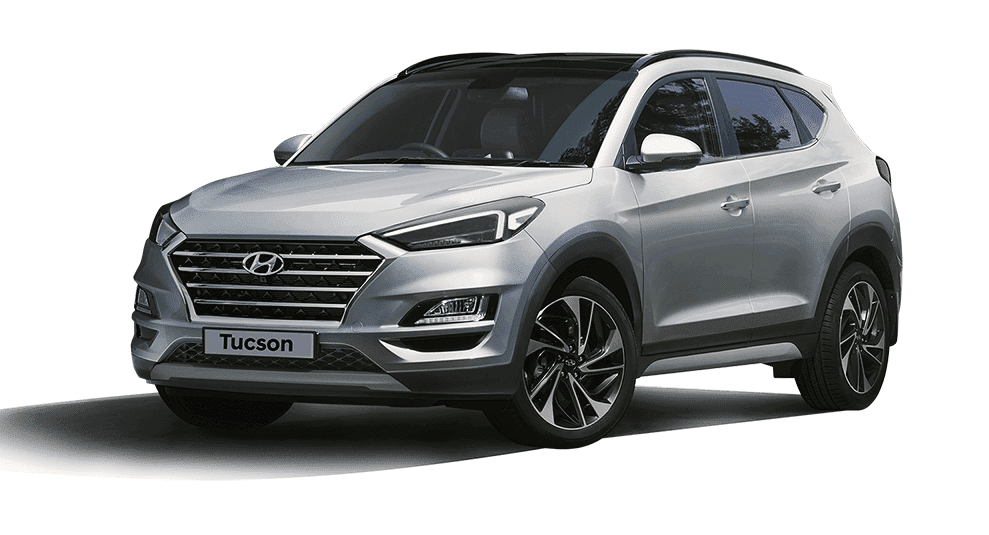 We’ve already discussed Tucson’s design quite a bit in the previous posts. It is a subtle yet handsome looking compact crossover SUV with an imposing hexagonal front grille, angular oval-ish headlights and taillights, smooth flowing lines, and a round silhouette. On the front, the car features the Penta-LED Headlamps with DRLs, a skid-plate that makes the car look slightly rough and tumble, and a couple of fog-lights that have DRLs of their own.

Come around the side and you’ll see power-operated side mirrors with built-in turn signals, puddle lamps, and heating mechanism. Furthermore, you get silver roof rails, and chrome door-handles, which livens up the side profile in a subtle but effective way. 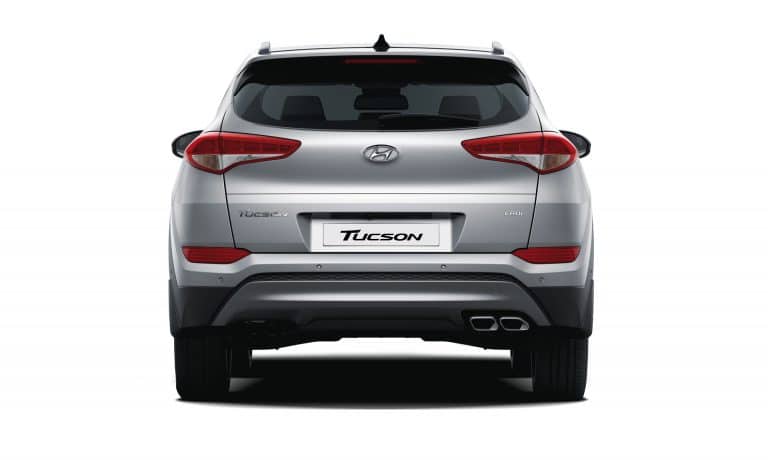 The backside features the oval-ish taillights native to the Hyundai design that we talked about earlier, a couple of rear reflectors at the bottom, twin-exhaust tip, and a shark-fin antenna at the back for style and better radio signal reception. 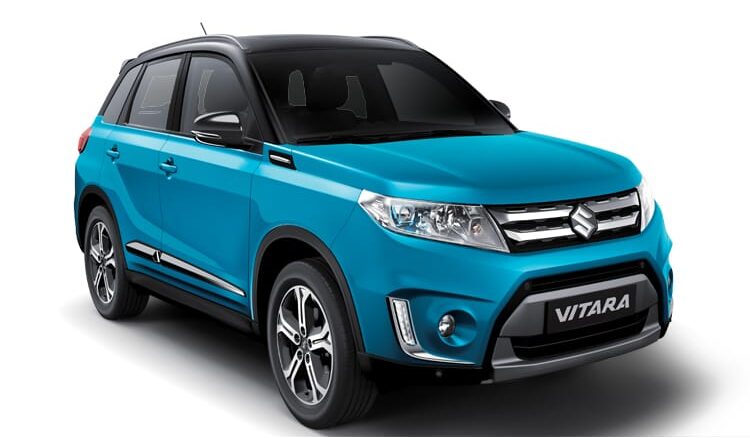 The Suzuki Vitara on the other hand has a much more traditional design, with its sharp edges and a boxy silhouette that makes it look like more of an enthusiast’s choice. The front features a rather handsome looking chrome grille, DRLs alongside the fog lights, some cosmetic vents near the bonnet, and uniquely designed headlights with a blue halo around the Xenon light bulb that makes the front of the car look quite distinctive.

Around the side, the Vitara features the rather good looking 17″ rims. You also get the black side mirrors with in-built LED indicator lights. The black mirrors match the color of the black A, B, and C pillars that go all the way up to the panoramic sunroof, which itself is black, giving the car a nice two-toned shade. Other than that, the side profile of this vehicle is quite simple, finished off with body-colored door handles that provide uniformity to the overall look. 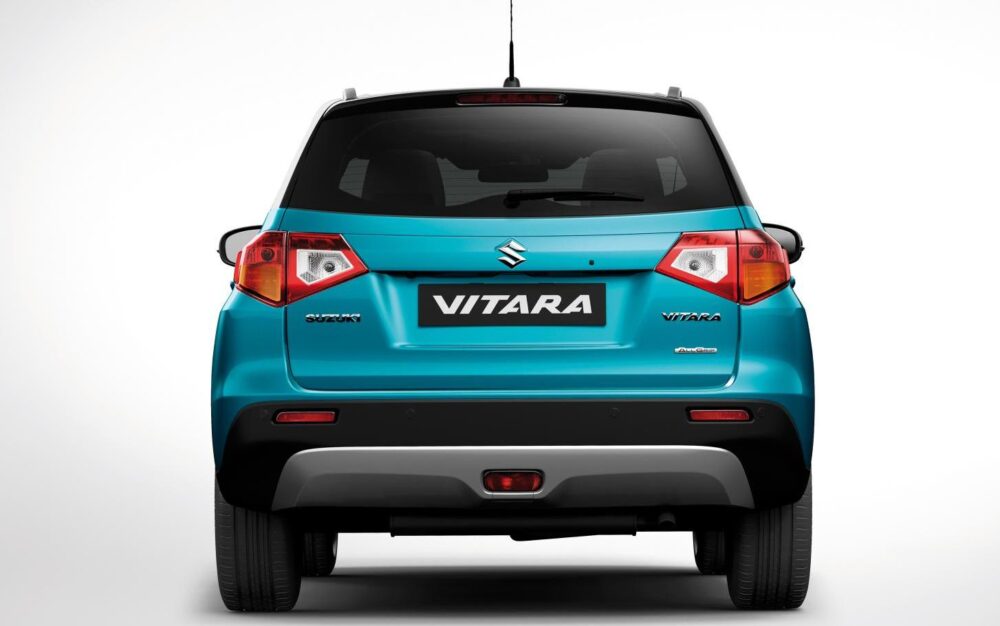 As good as the Vitara looks on the front, it looks just as bland from the rear. Around the back, the Vitara looks more like a boring family hatchback rather than a handsome SUV, with an antenna mounted on top for radio signals, rather old looking tail lights, and upon coming down further, you will spot to reflectors and what is perhaps a fog light mounted on the silver scuff-plate-like trim piece at the bottom of the rear bumper. It is not a bad look, but it’s not an awfully good one either.

Both vehicles have their own style and character on the inside, just like they do on the outside. However, Suzuki, as always, has gone for a simple design as compared to that of the Hyundai. 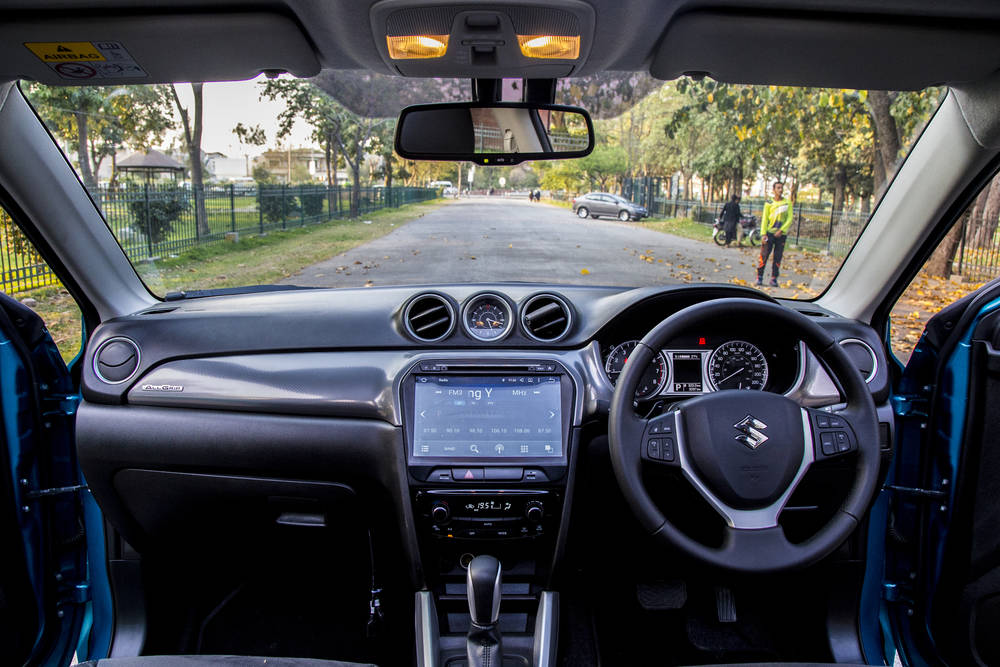 When you enter the Vitara, there is not much of a ‘wow’ factor. The interior is the same old hodgepodge of black and grey plastics. However, you do get a few modern features such as 10.1″ touch-sensitive infotainment screen with Apple Carplay and Android Auto, which is very easy to use and apt in terms of response.

The gauge cluster also features a multi-info digital screen that shows the car’s vital information to the driver. The rear seat capacity is slightly small due to the huge boot space of 710 liters. You also get a panoramic sunroof that brightens up the interior quite a bit on a nice and sunny day. Other than that, it is a fairly reliable, albeit boring interior. 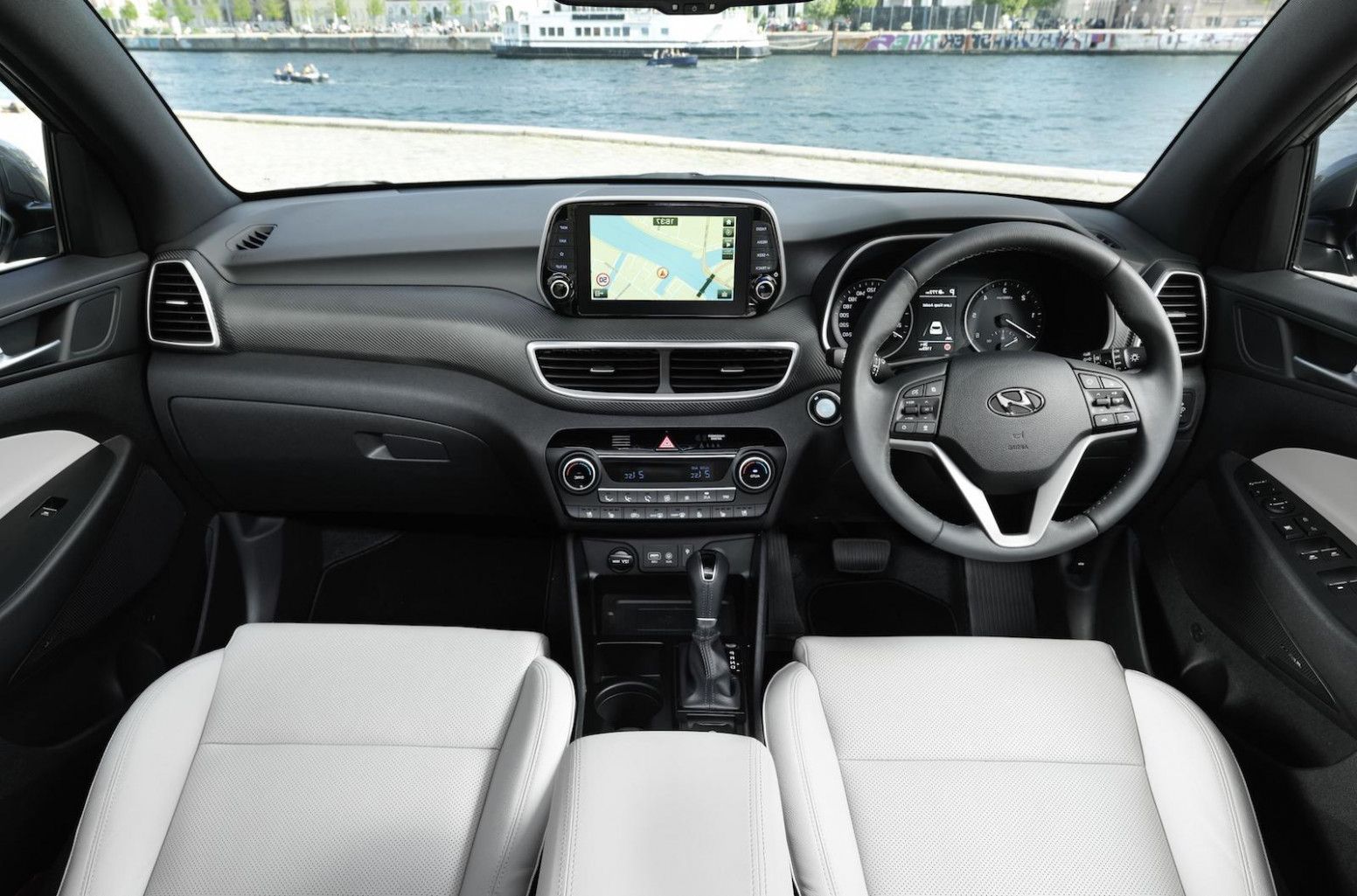 Tucson on the other hand is a much nicer place to be in terms of their interior design and quality. The cockpit is fairly modern and the dash design is a bit more complex and good looking. Plus, it comes loaded with features such as a larger 10″ infotainment screen, a dashboard that’s made from soft material, and an instrument panel with a digital screen for additional info, plush leather seats a roomy, and comfortable cabin space, and a panoramic sunroof for more brightness. All in all, the Tucson has a much nicer interior as compared to the Vitara. 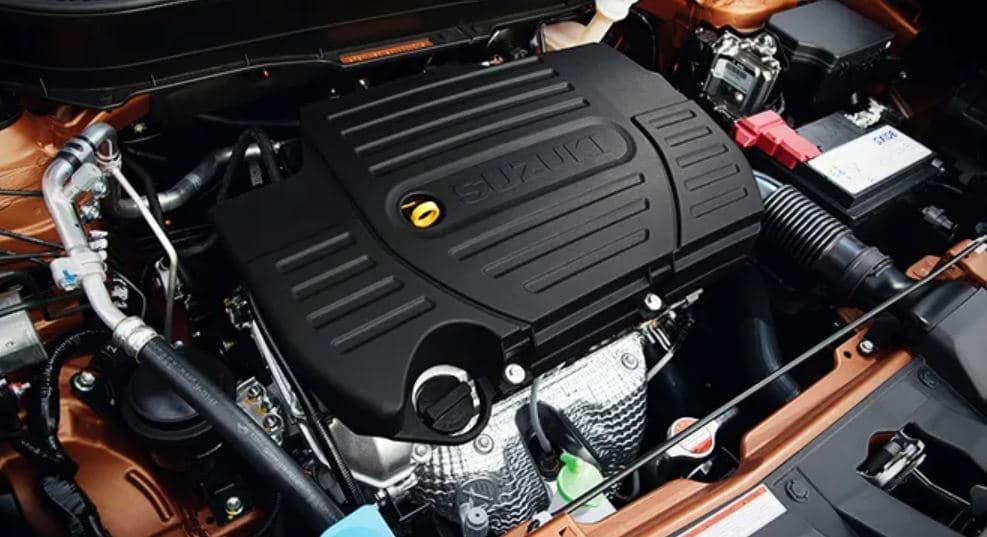 Although the reviews of the Suzuki Vitara’s performance have mostly been positive in the Pakistani Market, on paper, there’s nothing for the Vitara to brag about. The vehicle features a 1.6 liter 4-Cylinder petrol engine that puts out a maximum of 115 Horsepower at 6000 RPM and 156 Newton/Meters of Torque at 4400 RPM. The car can be mated to a 6-speed automatic transmission that sends power to all 4 wheels.

However, it does bear mentioning that the Vitara is almost 400 Kilograms lighter in weight than the Tucson. Therefore, it can safely be said that both cars have a sufficient amount of power for what they are. 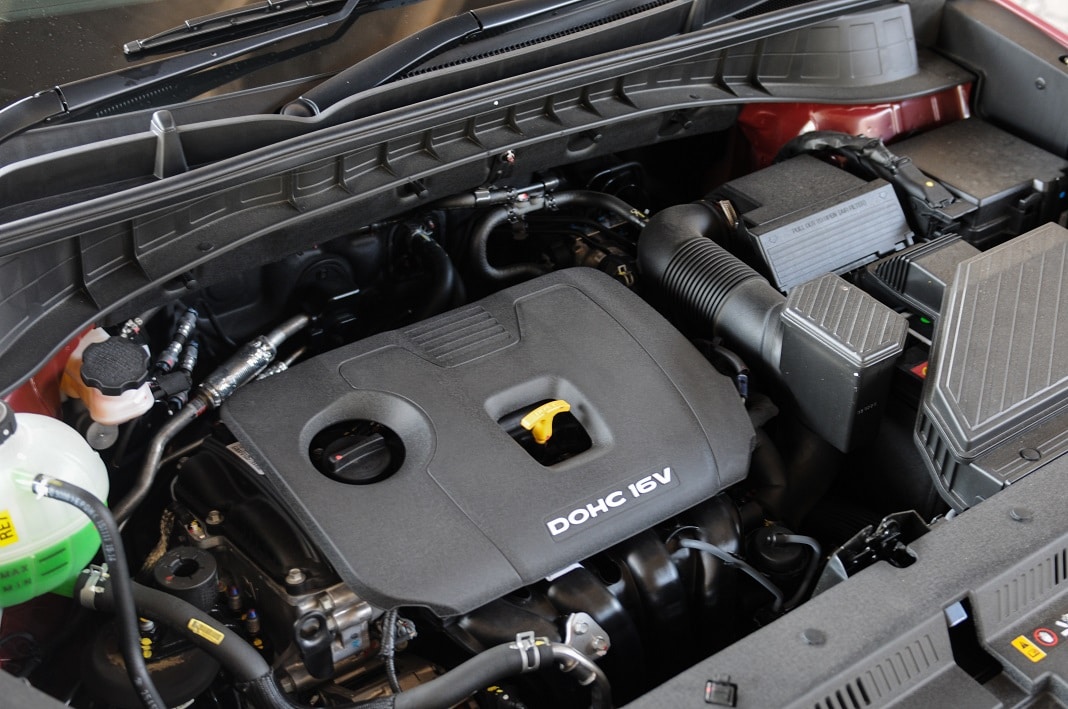 As for Tucson, we have already discussed its powertrain quite a few times. It has a 2.0 Liter 4-cylinder MPI petrol engine that puts out a maximum of 155 horsepower at 6200 RPM, and 196 newton/meters of torque at 4000 RPM, and come standard with a 6-speed automatic transmission that also sends power to all 4 wheels.

The Tucson’s suspension setup consists of McPherson struts up front and a multi-link coil spring suspension in the back. The Tucson also has Anti-Lock Braking Systems (ABS) with Electronic Brake-force Distribution (EBD) and Brake Assist (BA) technology to allow for decent stopping power.

In this comparison, we have compared the features of the Vitara GLX 1.6 with those of the Tucson Ultimate, since both cars are all-wheel drive and can be had for a nearly similar price. Following are the features that you can get in both cars:

Even though the Suzuki Vitara is smaller and has slightly fewer features than the Hyundai Tucson, bizarrely enough, both cars are priced equally. Suzuki Vitara did use to have a GL+ variant which was value below Rs. 4 million, but for some reason, Suzuki decided to discontinue that version. With that said, now both cars can be had for the following prices:

Taking everything into account, it is certainly safe to say that the Hyundai Tucson is a better value than the Suzuki Vitara. It is bigger, roomier, more comfortable, more modern, has better materials than the Vitara and costs just about the same. Plus, the Tucson has an additional variant that offers about the same features as the Ultimate version except for the AWD drivetrain and can be had for Rs. 400,000 less than the Suzuki Vitara.

That is not to say that the Vitara is not a good car. It is a fantastic compact SUV that features a lot of the modern tech and safety equipment that we don’t normally get here in our market. But if you have Rs. 55 Lac in hand and you were willing to spend them on a compact SUV, Tucson seems to be a much more tempting option. Unless you value 5 more airbags of the Vitara more than just the 2 offered in the Tucson.