Federal Board of Revenue (FBR) has done remarkably well in the first quarter of the current fiscal year (July-September 2020), on the basis of State Bank of Pakistan’s (SBP) provisional figures.

FBR has reported a net revenue figure of Rs.1,004 billion, exceeding the given target of Rs. 970 billion by a margin of 34 billion. Income Tax collection for the quarter stood at Rs. 358 billion. The collection of Sales Tax, Federal Excise Duty and Customs Duty remained at Rs. 426 billion, Rs. 56 billion and Rs. 164 billion respectively. This is the first time FBR has managed to cross the figure of Rs. 1 trillion in gross as well as net collection in first quarter of a fiscal year. 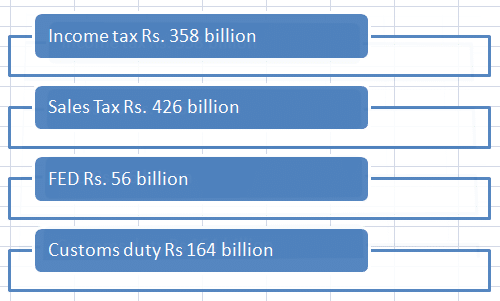 The gross revenue stood at Rs. 1052 billion, SBP data showed. During the time period in concern, refunds of approximately Rs. 48 billion have been issued – up from Rs. 26.5 billion in the same quarter last year – which has greatly helped boost the economic activity in the country.

FBR’s appreciable performance is despite the fact that the economy has been sluggish in the wake of on-going COVID-19 pandemic. Moreover, the government had extended significant tax relief measures to the public in the Finance Act, 2020. It also reflects taxpayers’ growing confidence on the revenue measures being taken by the present government.

FBR has initiated several revenue and facilitation-related revitalization measures including the establishment of Large Taxpayers’ Unit Multan and Corporate Tax Office (CTO), Islamabad. Furthermore, Pakistan Customs took extraordinary measures to resolve Transit Trade issues, which resulted in bringing down the dwell time (of en-route cargo containers till cross borders) to 5 days from 30 days. Another notable initiative is Transit Trade Facilitation portal that has also been operationalized.

During the first quarter of FY2020, smuggled goods worth Rs. 14.38 billion have also been seized, as compared to seizures of Rs. 8.4 billion during the corresponding period of 2019.

FBR is fully geared towards automation, e-audit, and simplification of procedures, e-payment of duty drawback so as to add to Ease of Doing Business (EoDB). Furthermore, FBR has launched a full-fledged crackdown against corruption, rent-seeking, harassment, and misuse of authority as about 100 officers and official have been suspended or dismissed.