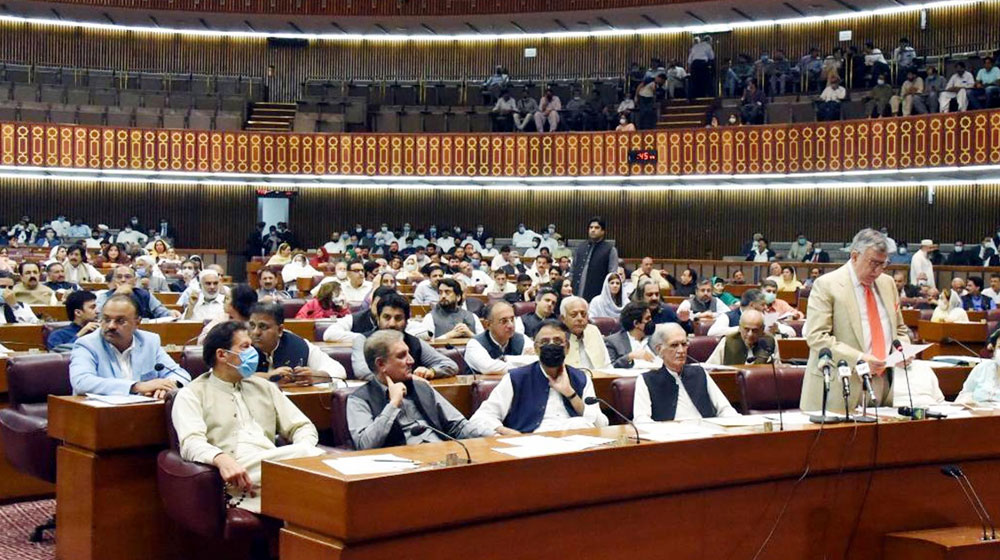 The federal government on Tuesday called a National Assembly session to pass the amended Finance Bill 2021, generally known as the federal budget.

The session was also attended by Prime Minister Imran Khan, who addressed the parliament later on and put forward his policy on the Afghan peace process and the United States’ demand for airbases.

At the start of the session, when Finance Minister, Shaukat Tarin, presented the finance bill after the final headcount, the roar of ‘No’ from the opposition benches was so loud that it created doubt among members of the treasury benches whether they will be able to pass the budget.

The Finance Minister, who had been rejecting amendment proposals in the budget from the opposition benches one after another, opted to stay quiet when Rana Qasim Noon, a PTI MNA from Multan, brought up a proposal. It was about converting annual air tickets given to MNAs into travel vouchers so that any member of the family could use them.

The government sought time to consult upon it with the premier, and later Foreign Minister, Shah Mahmood Qureshi, announced its approval and its incorporation in the annual budget.

“Rana Qasim Noon has tabled an amendment to convert the 25-year-old free air tickets received by members of the Assembly into travel vouchers so that they can be used by other family members as well. As it does not put an extra burden on the national exchequer, the government approves the motion,” he said, prompting a spontaneous wave of celebration from the opposition.

Within minutes, Qasim Noon became the ‘real hero’ of the parliament as members from both sides surrounded him for felicitation.

This proved to be a turning point as the rest of the budget session went in peace, with the government passing the budget with ease. The motion was approved with 172-138 votes.

Interestingly, the opposition, which had been involved in the worst verbal and physical scuffles during the previous budget-related sessions, stayed calm, even during the Prime Minister’s keynote speech.