The economic activity around Eid-ul-Azha is primarily cash-based. The State Bank of Pakistan (SBP) publishes weekly reports regarding ‘cash in circulation (CiC).’

This week’s report indicated a multi-fold increase in CiC in percentage terms, going back nearly three weeks before Eid.

Renowned economist, Ammar Khan, took to Twitter to present a brief evaluation of cash in circulation, as shown by the SBP report.

How much economic activity is generated during Eid-ul-Azha?

The event is predominantly cash-based. SBP publishes data regarding 'cash in circulation (CiC)' weekly, given the cash-oriented nature of the activity, CiC increases considerably (in % terms) in 3-wks preceding Eid

In 2020, CiC growth during Eid-ul-Azha has been the highest, making it one of the more prominent cash-intensive events during a year, said Ammar.

The event effectively leads to a transfer of $1.5 billion-plus of wealth (cash) from urban to rural economy, having a massive multiplier and spillover effect.

Growth in spending during the event can be a leading indicator of improving incomes. 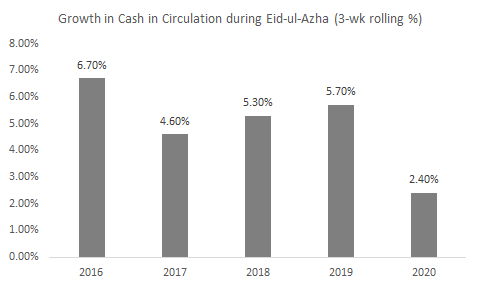 Looking at absolute cash numbers (excess of long-term average), economic activity during Eid-ul-Azha peaked in 2019 at Rs. 282 billion, while 2020 was a bad year.

However, in dollar terms, the best year was 2016 (overvalued PKR), and since then, it’s only been downhill. 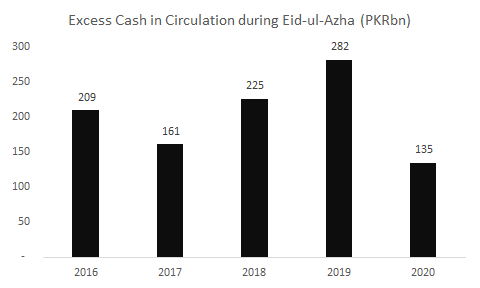 Also, the analysis is about ‘cash in circulation,’ so the same cash is spent multiple times as you buy an animal, the seller buys something else, and cash keeps moving.

“Actual impact would be an easy three times of the excess cash circulating in the economy during the three weeks [in concern],” he said.