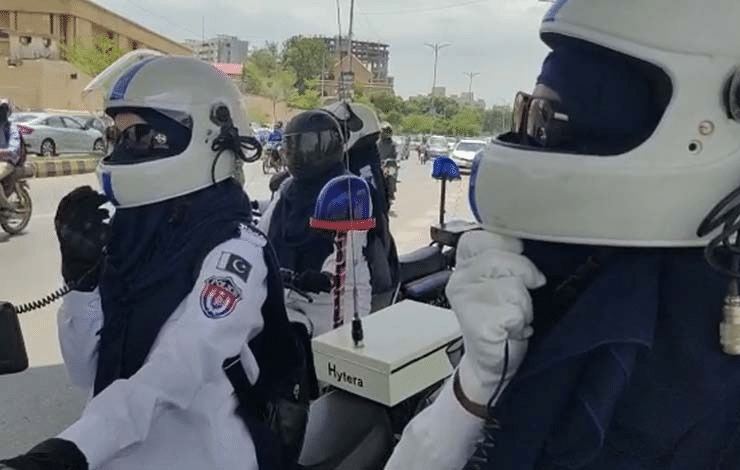 Lady Police Constables (LPCs) are now patrolling the roads of Karachi and have been tasked with spreading awareness about road safety, regulating traffic, and reducing traffic jams.

The city administration’s decision to induct women patrol squads is a welcome change as the LPCs revealed that female motorists are delighted with the development and women from the armed forces have commended the decision.

The patrol squad’s training started two months ago and it has been on active duty since mid-July. The constables can be seen near the Metropole Hotel and along Shahrah-e-Faisal up to Star Gate.

LPC Ambreen Neelum told a major media outlet that LPC Samavia Abbasi was the first female rider in the department. She was admired by other women but they were afraid of joining the squad themselves. She added that LPC Abbasi’s persuasion had been instrumental in them learning to ride motorcycles and join the squad.

LPC Samavia Abbasi was taught motorcycle riding by her male colleagues and is now the teacher and pioneer of female riding squads. After her training, she was posted on Shahra-e-Faisal where she would chase down female traffic violators and issue fines. She had observed that it is better for female officers to handle female motorists, which led her to recruit more women to the patrol squad.

LPC Neelum Ambreen said that she had learned to ride a bicycle as a child and the experience had been helpful in learning to ride a motorcycle. She disclosed that the weight of motorcycles had worried her during her initial training but the training had started on a 70cc motorcycle, followed by a 125cc one, and final progression to a heavier 150cc motorcycle.

LPC Neelum Ambreen wears a helmet on the road and advocates its use for the safety of motorcyclists. She affirmed that helmets do not constrict a rider from looking into the side-view mirrors, and that neglecting it is inexcusable.

The LPC praised drivers who heed the patrol squad’s advice and remarked that the squad has to be polite while dealing with motorists because environmental factors like heat can frustrate them. She added that she does not let road rage bother her as the squad’s primary job is to spread awareness about road safety.