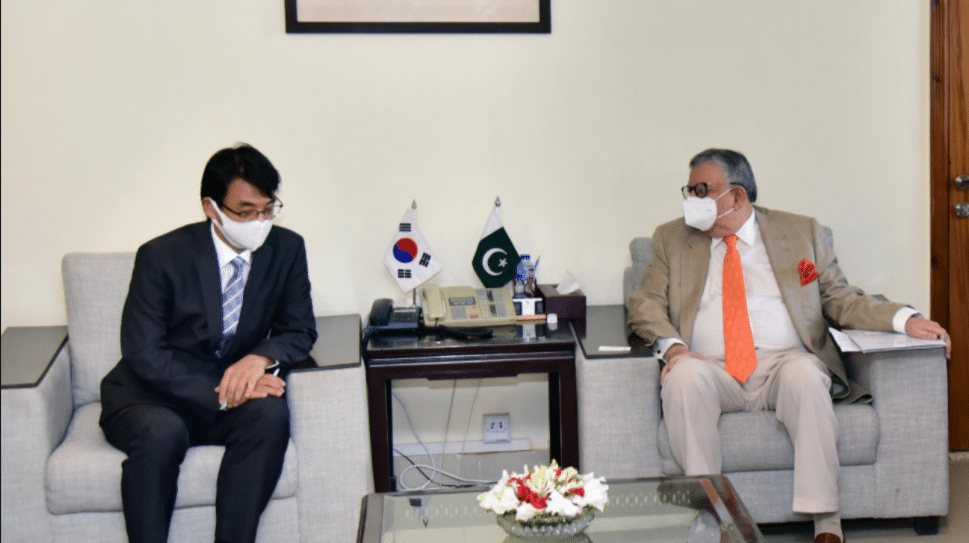 His Excellency Suh Sang-Pyo, Ambassador of the Republic of Korea, paid a courtesy call on the Federal Minister for Finance and Revenue, Shaukat Tarin, at the Finance Division today.

While extending a warm welcome to the Ambassador, the Finance Minister stated that Pakistan enjoys friendly relations with Korea and is looking forward to further strengthening bilateral relations between the two countries.

The Finance Minister thanked Korea for the 3-year Framework Arrangement under which $500 million are being provided for projects in IT, education, and health.

Both sides exchanged views on economic potential and stressed the need to further promote mutual trade and investment linkages.  The Finance Minister expressed the desire of increasing exports to Korea.

The Finance Minister briefed the Korean Ambassador about the recent economic developments and initiatives. The current government aims at achieving all-inclusive and sustainable economic growth with a key focus on a “bottom-up” approach.

The government has chalked out short, medium, and long-term plans to spur growth in key priority areas, he said.

Furthermore, the government is coming up with a comprehensive policy for the expansion of the auto industry in Pakistan by increasing the production of cars, motorcycles, tractors, etc.

The government is determined to encourage and incentivize foreign investors keen to undertake investment ventures in their respective fields. The government also stands committed to reviving the business and industry that has been hit hard due to the Coronavirus pandemic.

The ultimate focus of the government is employment generation, efficient resource mobilization, and industrial growth, he added. The Finance Minister welcomed plans by Samsung to start cell phone assembly in Pakistan and promised full facilitation in this regard.

The Korean Ambassador thanked the Finance Minister for his time and underscored the importance of people-to-people contact between the two countries. He also highlighted the potential for furthering cooperation in hydropower generation and stated that Korean companies are satisfied with the business environment in the country.

The Finance Minister affirmed full support and cooperation at the occasion.