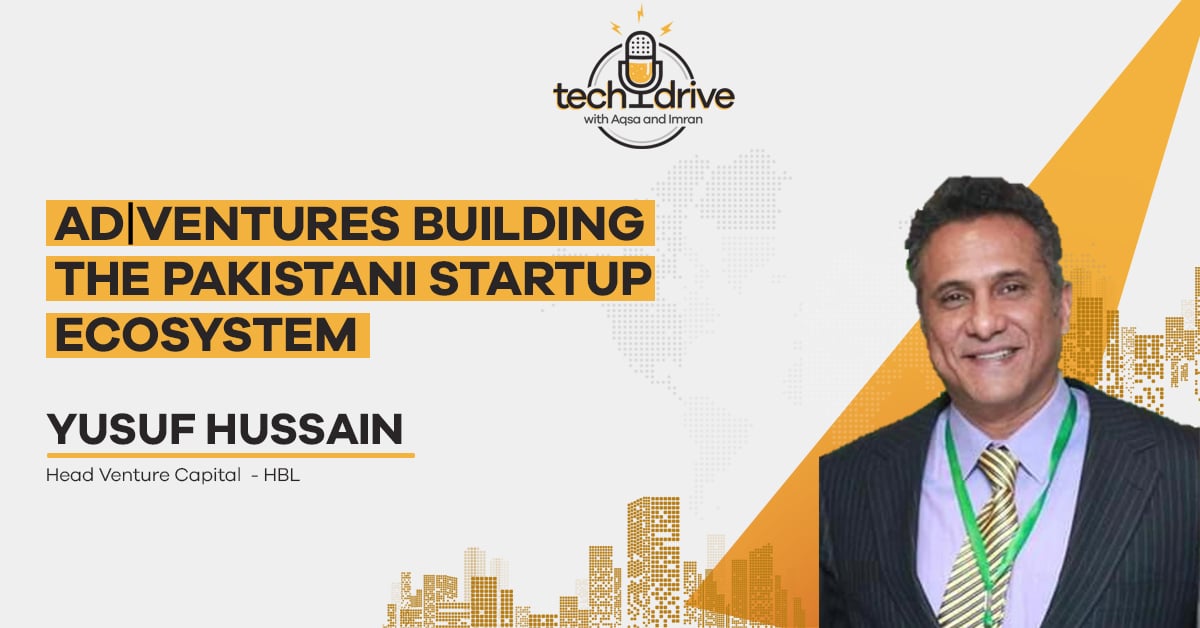 In the 5th episode of the podcast TechDrive with Aqsa and Imran, the hosts sit down with Yusuf Hussain.

Yusuf Hussain heads venture capital at Habib Bank Ltd., where he is focused on deals that promote digital financial inclusion and learning for HBL on its DX journey. Earlier, he was CEO of Ignite (previously also known as the National ICT R&D Fund).

He also co-founded and led a B2B eCommerce company in the USA, which was focused on telecom and chemicals verticals.

He has been leading the way for innovation and investment, first as a lead at the Founders Institute Islamabad, then working with technology companies as MD PSEB in the public sector, followed with his domain recognized work at Ignite, and now with corporates and financial institutions in venture capital through HBL.

Recently, Ignite and its incubation centers were awarded at the WSIS 2021. Out of 1300 projects submitted by governments and the private sector for World Summit on the Information Society (WSIS) Prizes 2021, Ignite was recognized for its national incubation centers.

WSIS process is coordinated by ITU in collaboration with UNESCO UNDP UNCTAD and this win for Pakistan validated the efforts made by a joint public-private partnership for the ecosystem. While speaking on the show, Yusuf Hussain shares, “My utmost goal has always been to support Pakistan’s technology ecosystem since the beginning of my career.”

During his time at Ignite, he’s had to make some tough calls. In this tete a tete, he talks about his role at the National Technology Fund, and mentions how supportive the ministry was and that his job was to implement which was only enabled due to the ministry’s support.

He initiated landmark projects during his tenure at Ignite, such as building the countrywide network of NICs, creating a seed fund, and an AI-powered training portal. He further elaborates on the ecosystem, saying:

“What happened in 2000 was a dot com burst, so we took a high risk, high reward approach and we did not take other kinds of projects and suffered the consequences, but what one sees now is that a lot of new generation entrepreneurs who are not American or European university graduates but from local universities such as LUMS, IBA or Chichawatni University and have the passion to make the world a better place.”

Elaborating on HBL VC funds, he says they were set up to help HBL learn along its digital journey since banking has arms all over the place encompassing online, education, and healthcare platforms. Finja represented a huge market so there was an opportunity for all sorts of things including enhanced lending services.

Co-host for the show, Imran Khan, Managing Director RapidCompute, comments, “In recent years, Pakistan’s start-up ecosystem has made significant progress and a lot of credit for that goes to supporting networks like tech hubs, educational institutions and investors like HBL VC playing an active role.”

Closing the podcast, he says, “Entrepreneurship is a tough business, don’t do it for the glamour, but if you want to innovate, you want to add value, it’s a tough path but it’s very fulfilling and gratifying.”

To catch more from the episode, tune in to the podcast TechDrive with Aqsa & Imran.

This podcast is jointly hosted by Aqsa Tariq & Imran Khan, produced by Salaina Haroon, and presented by RapidCompute & CXO Exchange. Together, they are breaking through the technology jargon, talking to industry veterans and innovators, and showcasing the Pakistani IT industry.

These are off-the-cuff conversations where you listen and learn about real life, real innovations from real people in the Pakistani technology industry.