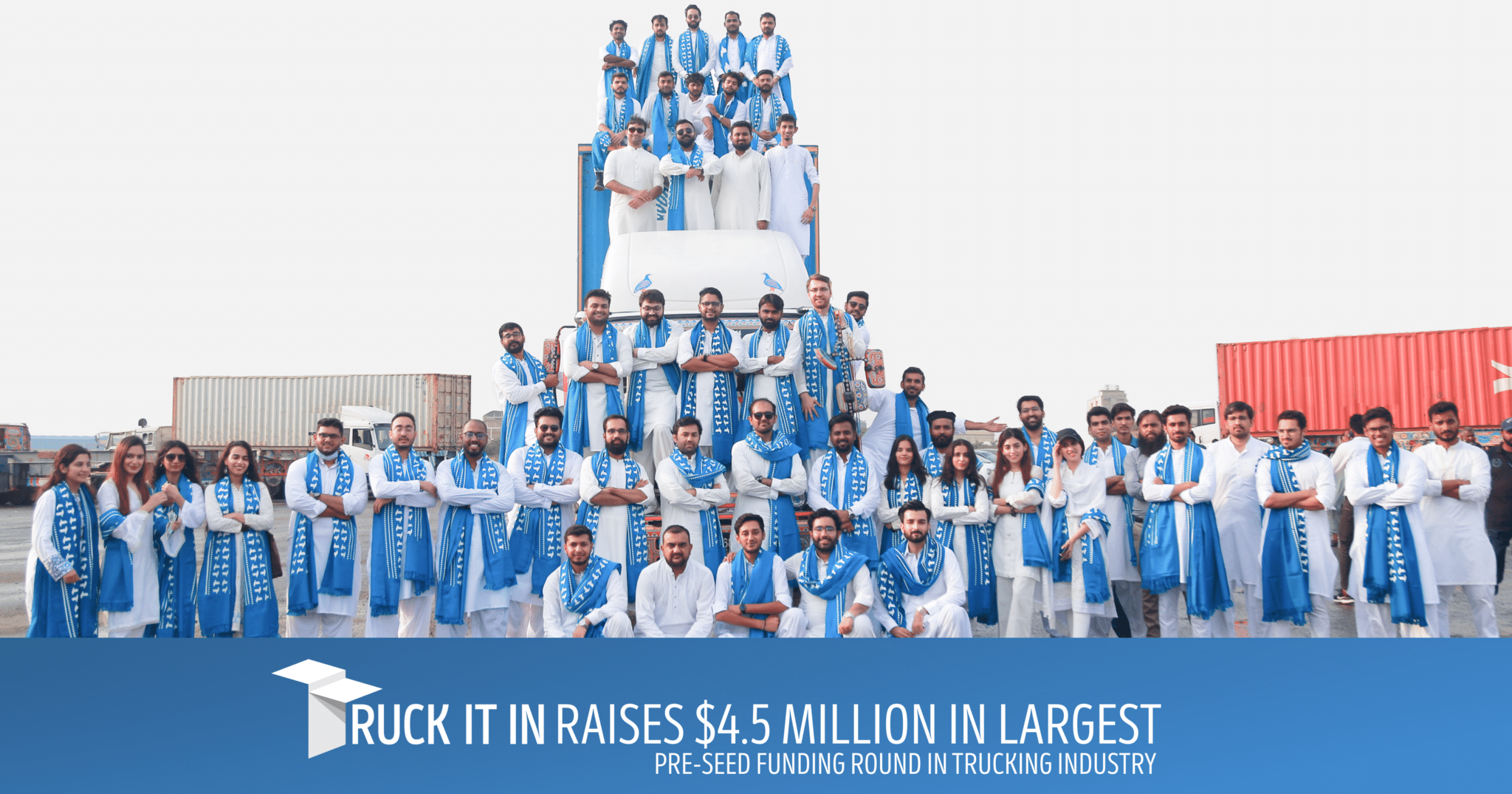 The company has raised the largest pre-seed round in the regional trucking sector to disrupt the $25 billion road freight market in Pakistan.

Truck It In, a marketplace solving road freight inefficiencies in Pakistan, announced a $3 million extension of its pre-seed round while taking the cumulative raise to over $4.5 million in just over four months, making this the largest round for this stage in the trucking space.

The extension will empower Truck It In’s national expansion as it is poised to become the country’s largest trucking platform. The extended round was led by Global Founders Capital and Fatima Gobi Ventures again, reposing their confidence in the team and the opportunity. They have been joined by the early-stage technology investment firm, Picus Capital, and Zayn Capital.

The previous pre-seed investors include Deosai Ventures, Zayn Capital, and +92 Ventures. Truck It In has partnered with strategic investors that are helping it tap into its local supply chains and are leveraging its regional connections for the next growth phase.

The CEO and Co-Founder of Truck It In, Muhammad Sarmad Farooq, said, “We’re at the very early stages of transforming a critical industry and aim to help over 3 million businesses save $1 bn annually in supply chain inefficiencies. Our long-term aim is to streamline and digitize the logistics sector to create a ripple effect across the economy”.

Tito Costa, a partner at Global Founders Capital, remarked, “In only a few months since launch, we have seen an overwhelming market response to Truck It In’s offering,” and added, “we are honored to increase our commitment and support the team as they scale even faster to capture this opportunity in Pakistan”.

FGV’s General Partner, Ali Mukhtar, commented on the follow-on investment and said, “Our thesis has been well-placed in Truck It In’s team to streamline Pakistan’s legacy trucking sector and drive rapid growth in the business. We are confident in their ability to further scale across Pakistan and beyond”.

Florian Reichert, a Partner and Managing Director at Picus Capital, stated, “We are excited to partner with the team of Truck It In which in our view is in a prime position to establish themselves as the leading trucking marketplace in Pakistan. Their vision of building a holistic value proposition for shippers and truckers is what stood out and finally convinced us to become active in the space”.

With this latest fundraiser, Truck It In will expand its services and product features that will help it scale to the next level. It is taking big strides towards achieving its vision to digitize the trucking industry and capture the market.

Truck It In is a tech start-up focused on streamlining road freight for more than three million businesses in Pakistan. It was founded in late 2020 by Muhammad Sarmad Farooq, Raza Afzal, and Haider Navid.

Powered by a robust technology platform, an immensely talented team, and an insatiable hunger for growth, Truck It In is on a mission to help businesses scale and run efficiently by connecting them directly to a highly fragmented trucker’s market. This opportunity represents 10 percent of Pakistan’s GDP, and the company aims to be the nexus of road freight in the country, helping businesses scale while improving the lives of its truckers.