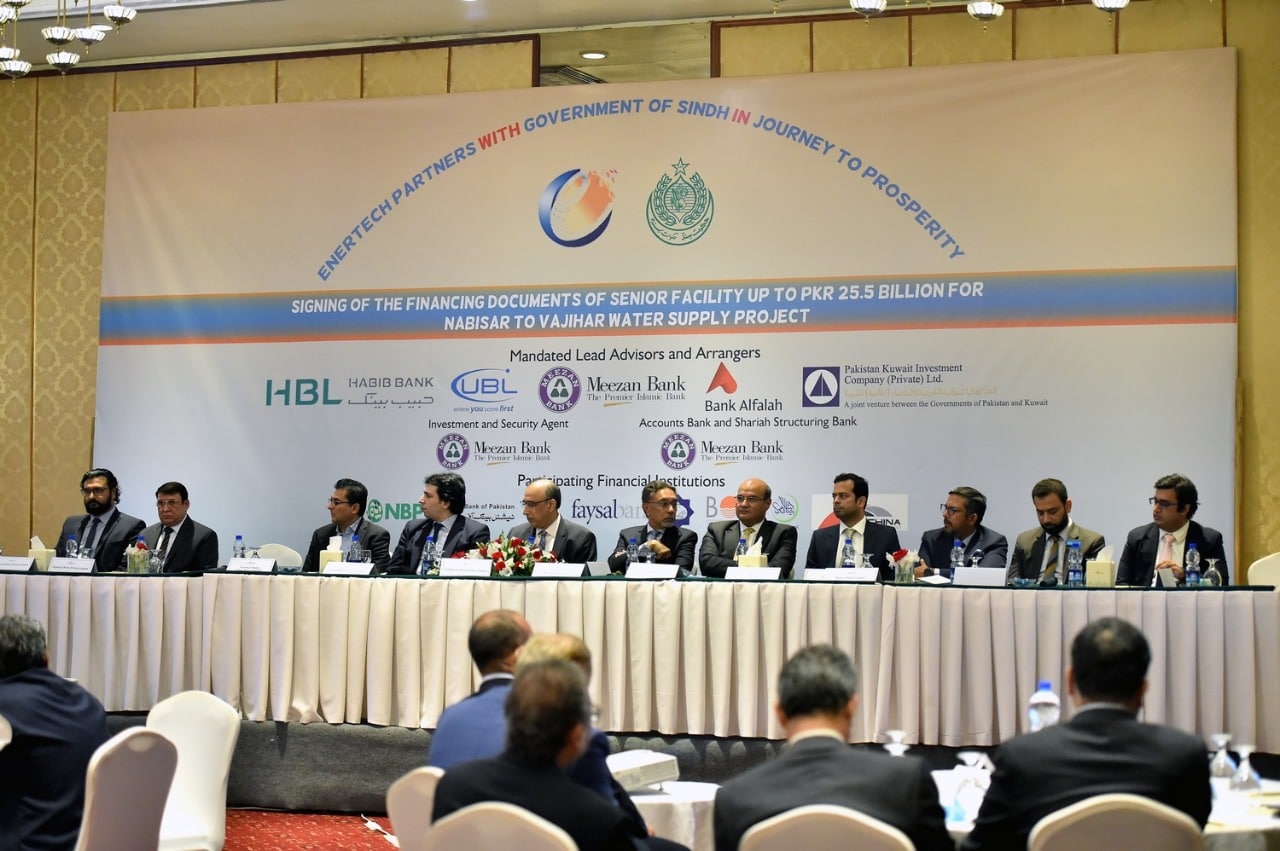 The facility will be utilized for the development of a 45 cusec water supply project from Nabisar to Vajihar, including two large water reservoirs and a 65 km pipeline in Thar, Sindh.

EnerTech Water Private Limited signed a Concession Agreement with the Government of Sindh under public-private partnership mode to build, construct and operate a water processing facility for supply of water to Thar, Sindh.

The financial sector of the country registered an overwhelming interest in the transaction, resulting in the facility being oversubscribed by a substantial amount. The Mandated Lead Advisors and Arrangers for the facility are Habib Bank Limited, United Bank Limited, Meezan Bank Limited, Bank Alfalah Limited, and Pak Kuwait Investment Company (Private) Limited.

The transaction is being led by Meezan Bank in the capacity of Investment Agent, Security Agent, Accounts Bank, and Shariah Structuring Bank.

Pakistan’s Ambassador to Kuwait, Syed Sajjad Haider, while addressing the audience congratulated the parties, including the Government of Sindh and the lenders for successfully developing a transaction with a group company of Kuwait Investment Authority. He stated, “This project will strengthen the relationship between Kuwait and Pakistan and further encourage investment from Kuwait.”

Chief Executive Officer of EnerTech Holding Company, Abdullah Al Mutairi, stated, “Pakistan has some of the most outstanding professionals in the banking as well as public sectors. Pakistan can be a very attractive investment destination for sophisticated investors and EnerTech will continue to play its part to develop infrastructure in Pakistan.” He acknowledged the contribution of the Enertech team led by the CEO, Yasser Malik, for the successful execution of the project. He also praised the efforts of the COO, Usman Ahsan, for the structuring and execution of the transaction.

Deputy CEO Meezan Bank, Ariful Islam, said, “I would like to congratulate the Government of Sindh for successfully closing this very important project and that this is an excellent example of a Public Private partnership. Meezan Bank has always been keen to play an active role in the development of the country and is delighted to have had the opportunity of playing a lead role in arranging the debt financing for this project – this is largest financing facility raised for the Government of Sindh, structured under a public-private partnership that will contribute towards sustainable infrastructure development. As the country’s largest Islamic bank, we aim to continue working with entities like Enertech to bring strategic infrastructure projects to scale for the betterment of the region.”