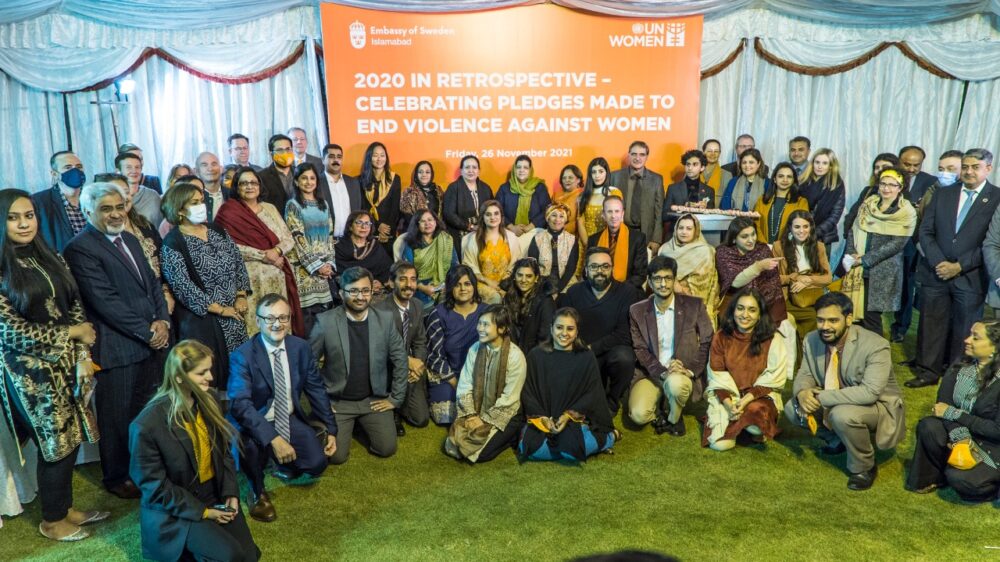 As the 16 Days of Activism against Gender-Based Violence campaign kicked off across the globe, UN Women Pakistan and the Swedish Embassy in Pakistan celebrated champions who have played their part in accelerating efforts to end violence against women and girls in the past year. The event titled ‘2020 in retrospective – Celebrating Pledges Made to End Violence Against Women was held on Friday 26th November in Islamabad and was attended by government officials, diplomats, and other development partners. 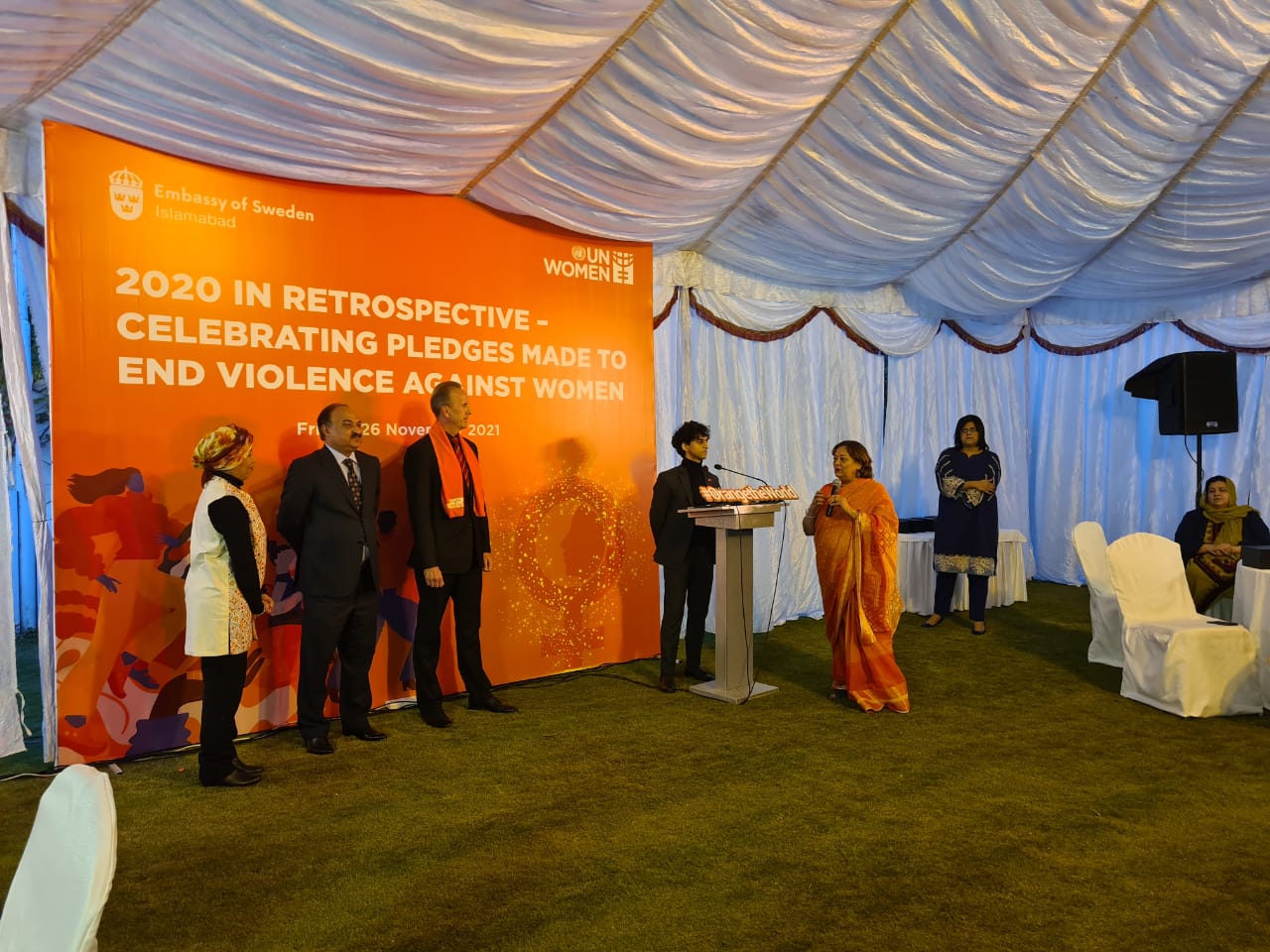 While welcoming the guests at the auspicious ceremony, the Swedish Ambassador appreciated the concerted efforts of stakeholders to stand against gender-based violence. He added,

No country is unaffected. Gender-based violence is found everywhere. Clear policies, legislation, and changes of attitude are necessary. The self-evident right of women, girls to decide over their own bodies is being challenged. It must be defended.

In 2020, under the global theme of “Orange the World: Fund, Respond, Prevent, Collect!” UN Women Pakistan encouraged participants to make commitments for ending violence against women, and a number of pledges were received by our partners to bridge funding gaps, show political will for calling for an end to violence, and ensure essential services for survivors of violence. 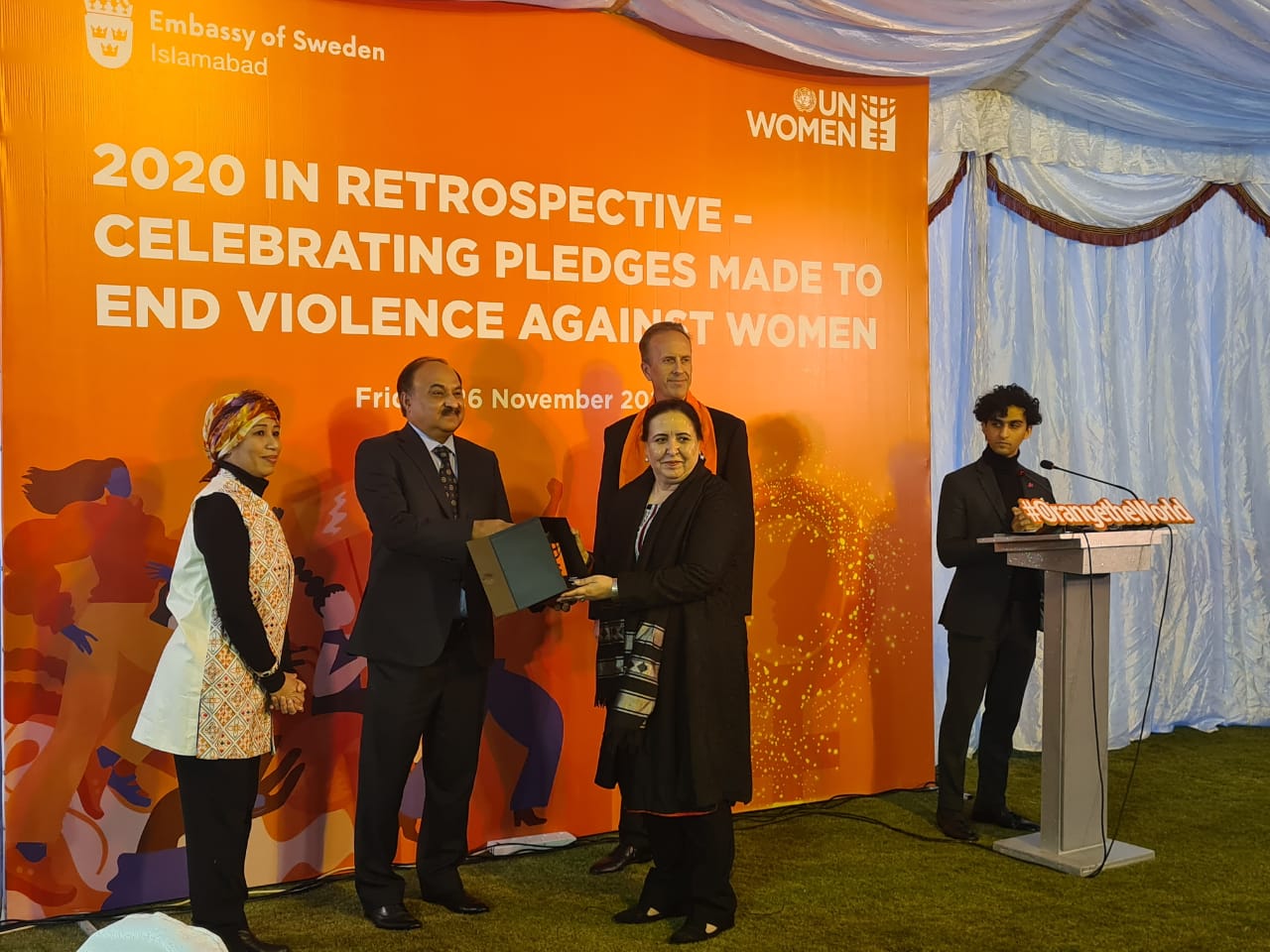 To appreciate the commitments and actions taken on pledges made, nine awards were presented to awardees from the Federal Capital, Balochistan, Khyber Pakhtunkhwa, and Sindh. 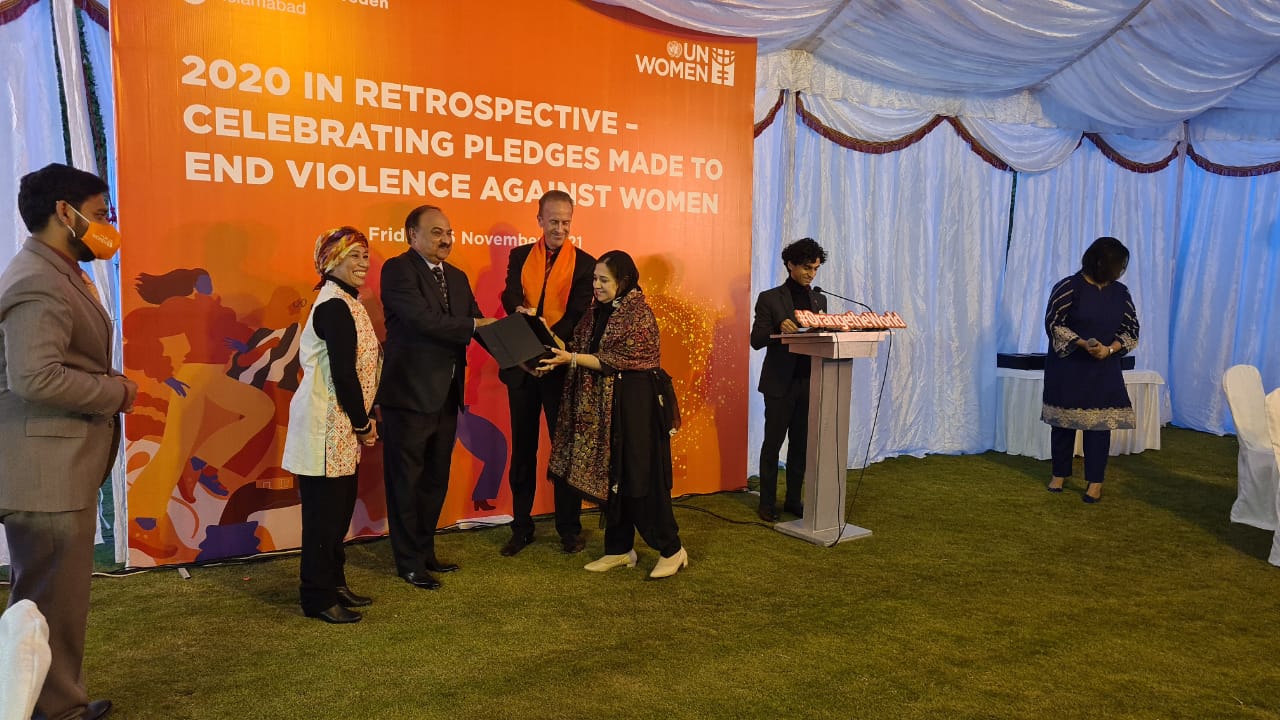 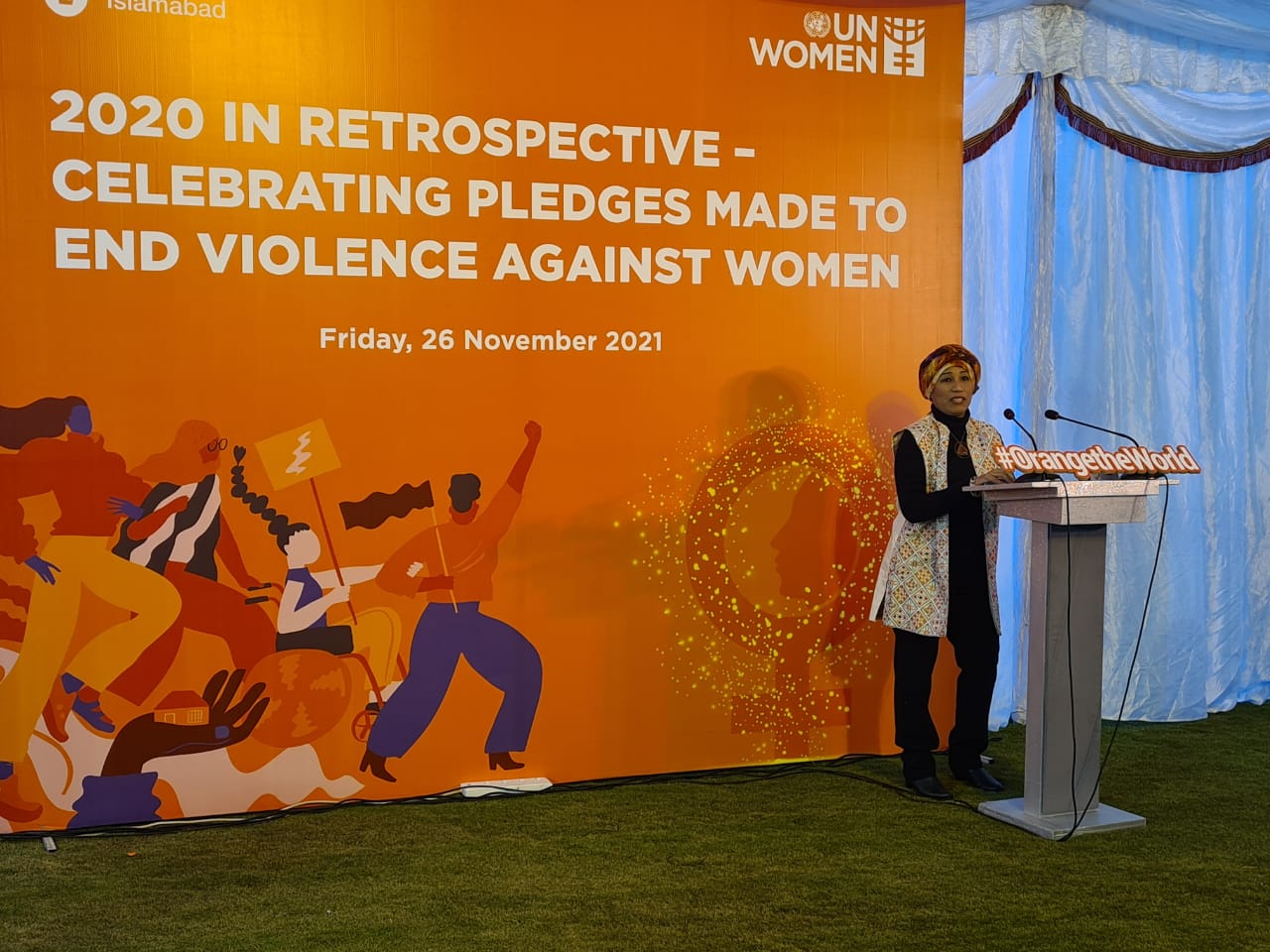 Ms. Sharmeela Rassool, Country Representative UN Women, applauded the meaningful steps taken by the awardees in solidarity for ending violence against women and girls. She said

We haven’t responded to the shadow pandemic of violence against women in a way we have responded to the current pandemic of Covid-19.  Without us acting together, we will not be able to end this grave violation of human rights. I appeal to all women and girls, men and boys to be the voice of the voiceless, break the cycle of violence, and don’t just be a passive bystander.

Mr. Inamullah, Secretary of Human Rights, as the chief guest of the ceremony said:

Domestic violence acts have been promulgated by all four provincial governments. The Ministry of Human Rights has also introduced the domestic (prevention and protection) Bill 2021 which has been under consideration by the Parliament. Sensitization and awareness-raising of the public are one of the regular features to end violence against women. 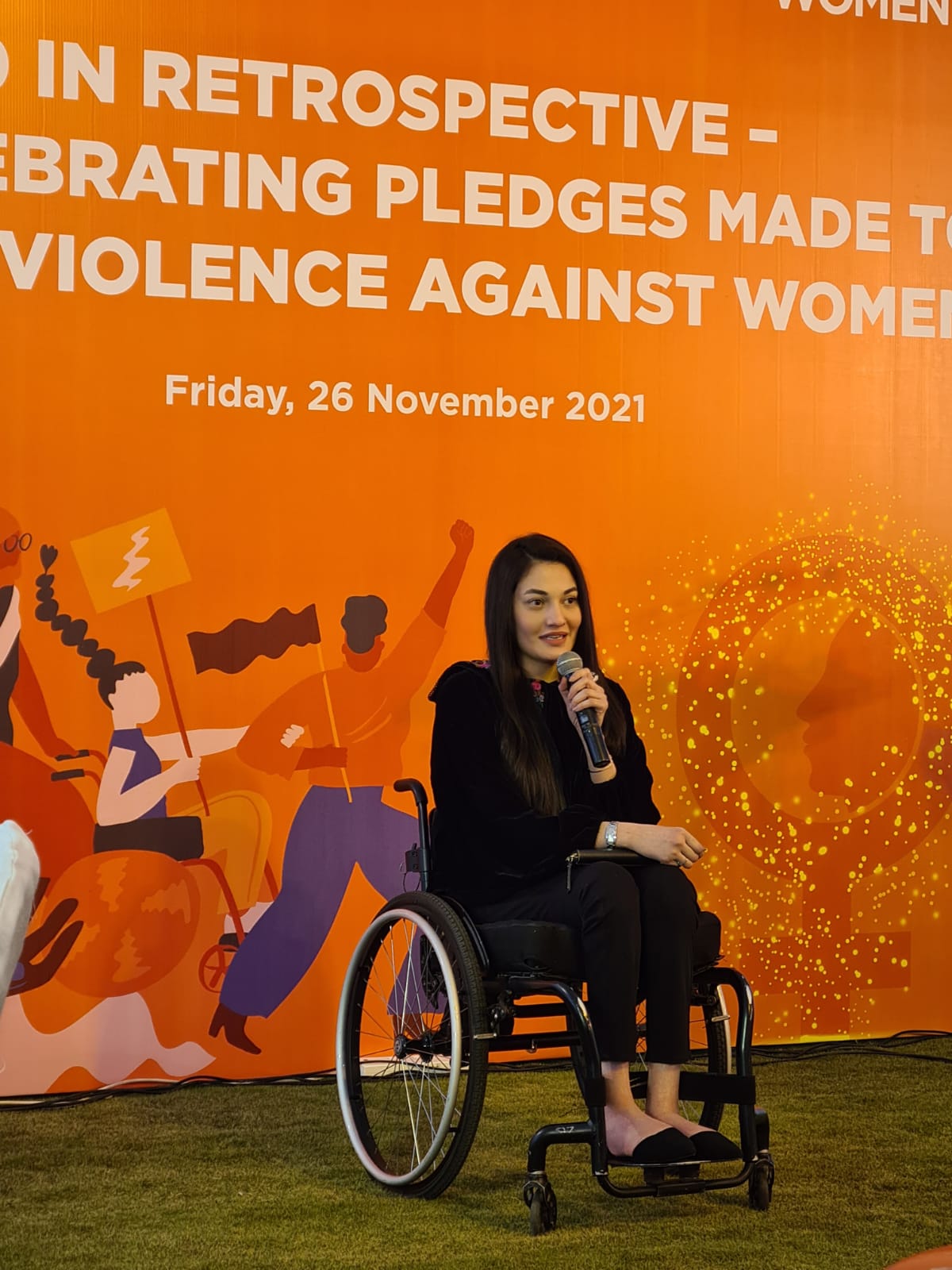 The event ended with a celebratory performance by Ms. Natasha Humera Ejaz, a singer, and songwriter from Islamabad and member of the UN Women Pakistan team.