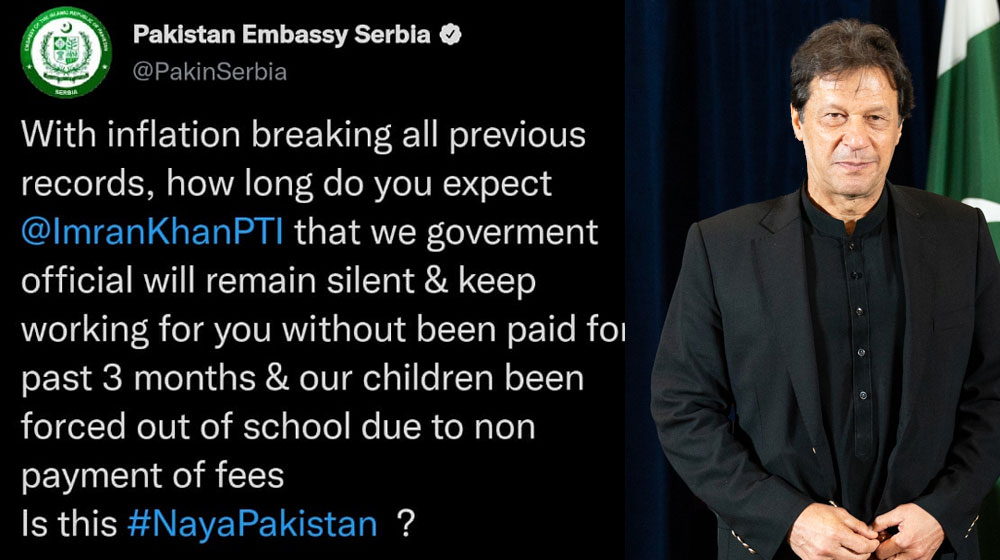 A public message posted from the official Twitter handle of the Pakistan Embassy Serbia on Friday caused a stir on social media.

The message, apparently from an official of the embassy, asked Prime Minister Imran Khan to release the salaries of government employees.

“With inflation breaking all previous records, how long do you expect Imran Khan that we government official will remain silent & keep working for you without been paid for past 3 months & our children been forced out of school due to non-payment of fees. Is this #NayaPakistan?” the tweet read.

“I am sorry Imran Khan, am not left with another option,” said another tweet from the same account.

While the public demands action against the person responsible for this gaffe, the government of Pakistan says that the account has been hacked.

Later, Dr. Arsalan Khalid, the Focal Person to Prime Minister on Digital Media, also confirmed that the account had been compromized.

The Twitter account of Pakistan's embassy in Serbia is hacked as per information from foreign office and @ForeignOfficePk is conducting an enquiry into it.

He said that the Foreign Office had already launched an inquiry into the matter.

The Ministry of Foreign Affairs (MoFA) also confirmed the hack on Twitter.

Messages being posted on these accounts are not from the Embassy of Pakistan in Serbia.

People are still debating whether this was a deliberate attempt to undermine the government or the account was really hacked.

According to some Twitter users, the second option seems more plausible because government employees, especially those associated with bureaucracy always get paid in time.

Soon after the clarification from the Foreign Office regarding the Serbia embassy, a letter from the High Commission of Pakistan in Bangladesh to the Foreign Office also surfaced on Twitter. The content of the letter was similar to that shared on the Twitter handle of the Pak embassy in Serbia earlier in the day.

In the letter, the Chancery office in Dhaka requested the Ministry of Foreign Affairs to release Rs. 10 million funds, so that the employees could pay tuition fees for their children studying in Dhaka.