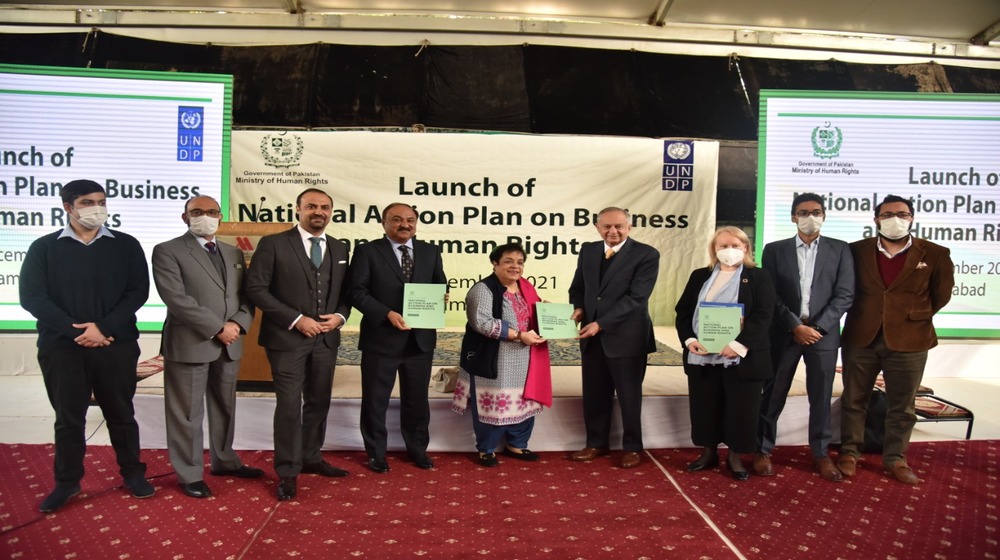 Speaking at the launch, Minister for Human Rights, Dr, Shireen Mazari said that “Safeguarding fundamental human rights is a firm priority for the government of Pakistan. NAP’s implementation will raise human rights standards in business activity across the country.”

She emphasized that effective implementation of NAP will require the participation of a variety of stakeholders across Pakistan.

Thanking the UNDP for its technical support throughout the NAP development process, Secretary of the Ministry of Human Rights, Inamullah Khan, during his opening remarks, said that “Pakistan can be proud to be the first country in South Asia with a NAP on Business and Human Rights, developed through an inclusive multi-stakeholder consultative process.”

During the launch, Chief Guest, Abdul Razak Dawood, Adviser to Prime Minister of Pakistan for Commerce and Investment, shared that in Pakistan’s growing economy, an increasing number of businesses are becoming aware of their human rights responsibilities.

UNDP Pakistan’s Deputy Resident Representative, Aliona Niculita, congratulated the government of Pakistan on this major milestone for the country, led by the Ministry of Human Rights.

“The NAP makes several pledges relevant to the protection and promotion of the rights of the most vulnerable and marginalized workers, including those who are part of the large informal economy in Pakistan,” she said.

UNDP is proud to have supported the Ministry of Human Rights on this initiative since its inception in 2018. The NAP was developed after conducting a national baseline assessment and several rounds of multi-stakeholder consultations across Pakistan, in collaboration with UNDP’s partner Research Society of International Law (RSIL), she said.

The NAP is a policy document in which the government commits to the protection of human rights in all forms of business activity.

It is based on the United Nations Guiding Principles on Business and Human Rights, which are built around three pillars: