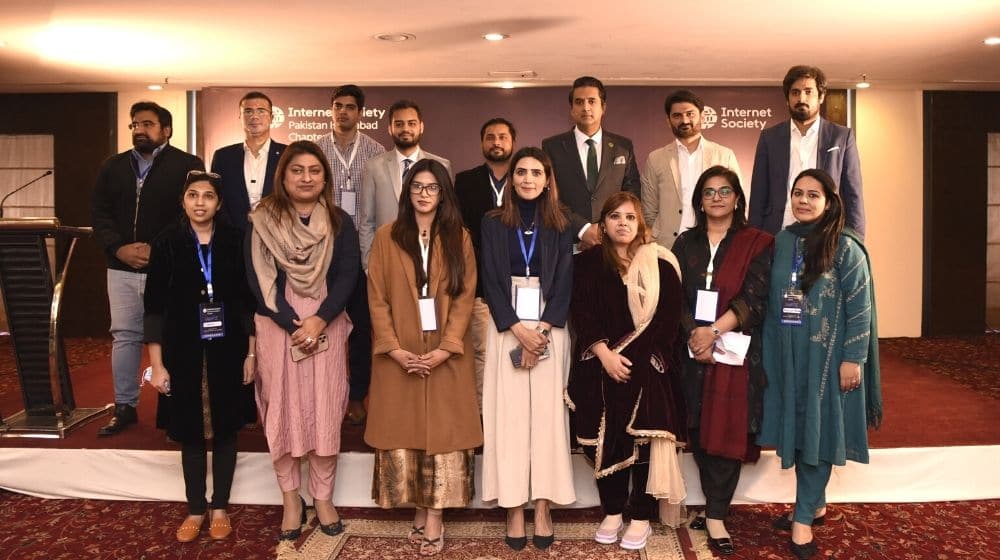 The 5th Sustainable Development Goal (SDG) identifies gender equality and women empowerment as an important step towards achieving a peaceful and sustainable world. Efforts and initiatives by governments and the private sector have been introduced to bring more women and girls into the tech sphere.

To address such issues and find solutions to the associated challenges, the Internet Society Islamabad Chapter organized WeRise to provide a platform for women, by women, on the 11th of December.

Attended by notable names from PTA, NTC, Ministry of IT and Telecom, and academia with Deputy Commissioner Islamabad, Hamza Shafqaat invited as the chief guest, the event initiated important conversations on digital inclusion and financial literacy.

A total of 30 trainees were led by Adeela Arif, CEO of 21st Century Education and a Microsoft Certified Master Trainer, and Sadia Marium, a Dual Cisco Certified Internetwork Expert (CCIE x2), working with the US-based IT Services provider.

The digital gender divide is globally recognized as a major challenge to the digital transformation process in the world. The event was led with a keynote from Jeanette Whyte, Head of Public Policy APAC, GSMA, highlighting the digital gender disparity in users across the world. GSMA works to reduce the gender gap in the mobile internet and mobile money services across low- and middle-income countries.

Jeanette Whyte highlighted that the gender gap in South Asia is the worst in the world, with only 18% of the women using the Internet. Almost 58% of women can use mobile internet, with about 234 million fewer women than men accessing it. The mobile internet gender gap is continuously reducing with a lower gender gap noted for the first time since 2017.

Jeanette Whyte highlighted that the only way to close this gender gap is to treat it as a social, commercial, and economic opportunity, as figures suggest that it is a $130 million opportunity for the mobile industry in Pakistan.

Jeanette Whyte focused on the reduction in the gender gap in mobile internet users and mobile money. The best approach to take in such a scenario is through advocacy, enhancing market engagement, and presenting detailed insights.

The first-panel discussion on the Role of Women in the Digital Transformation of Pakistan was led by Sidra Jalil (InspireMill) with panelists Yumna Hasany (FM101), Tayyaba Ameer (PSEB), Malahat Rab (PTA), Samina Rizwan (Code for Pakistan).

The discussion focused on the initiatives by different government and private agencies, their different policies, challenges and issues faced by women within both urban and rural areas. The panel also shared actions and solutions that need to be taken to overcome these challenges.

Dr Iffat Zafar Aga, co-founder and COO Sehat Kahani, a Pakistani-led telemedicine startup focused on bridging the gap between a home-bound female workforce and rural areas lacking access to healthcare. Dr Iffat illustrated how many in Pakistan lack access to basic healthcare facilities and access, despite having a population of more than 220 million. The GSMA-funded startup connects users to a wide range of ICT-enabled health services via a helpline or through video consultation or by simply visiting a SehatKahani Clinic.

Sehar Tariq, Policy Manager, SheMeansBusiness by Meta highlighted that a large majority of the Pakistani population is under 25, with 90 million broadband subscribers. However, Pakistan has the largest internet gender gap in all of South Asia. Sehar Tariq highlighted the importance of why it is important to close this gender gap and why women should be online. Without the online presence of more than 50% of the entire population, it is very difficult for a successful and digital Pakistan. With 54 million monthly users on Facebook, 98% of the population uses smartphones to access social media apps. The gender disparity on social media is still worse.

Panel II discussion on Supportive Work Environment for Digital Empowerment of Women, and included the panellists Dr. Nadia Khadim (Head of Legal, FJWU), Khadija Murtaza (Director QA, We R Play), Kiran Aslam (CEO VagaTales), and Madiha Shafique (Project Manager, Ministry of IT and Telecom). The panel discussion highlighted women-friendly workplace policies, the challenges faced by women in the workplace, and steps women should take to overcome any challenge they may face in the workplace.

The regional director for Infrastructure and Connectivity, Internet Society, Naveed Haq delivered the closing address on digital accessibility. Followed by an address by the Deputy Commissioner Hamza Shafqaat. The Deputy Commissioner praised the organizers for initiating the discussion of female inclusion in tech. Deputy Commissioner highlighted the many achievements and initiatives of the government to make Islamabad a safe city for all of its residents.

Hamza Shafqaat highlighted the efforts of the Federal Ombudsman for Protection against Harassment (FOSPAH), Pakistan’s first quasi-judicial statutory body for protection against harassment at the workplace, as well as for matters related to the inheritance of women.

Shafqaat also praised the efforts of Pakistan’s first gender protection unit within Islamabad. Highlighting the barriers and challenges faced by women in approaching government authorities regarding any matter, He pointed out the increased social media presence of the Islamabad administration and encouraged women to connect with them online via the PM portal.

Among other initiatives, Shafqaat highlighted the Islamabad administration’s Let’s Grow Together initiative for female entrepreneurs.

The Deputy Commissioner also highlighted a new initiative by the administration to launch a woman-only bazaar within the hills of Islamabad.

Digital interventions including mobile apps such as Durust Daam have already been launched for the assistance of female consumers. Other apps such as City App Islamabad with 43 different services are also available for tasks such as lodging complaints or contacting the administration.

Latest initiatives such as Property Verification Centres have also been introduced for the ease of women and men alike. Property verification can also be done via the ICT administration’s official website.

With offices in Reston, Virginia, and Geneva, Switzerland, ISOC was established “to promote the open development, evolution, and use of the Internet for the benefit of all people throughout the world”. With more than 110 active Chapters across six continents, the society runs multiple programs, supporting their vision of an Internet for everyone through educational events, community programs, public policy programs, and many more.