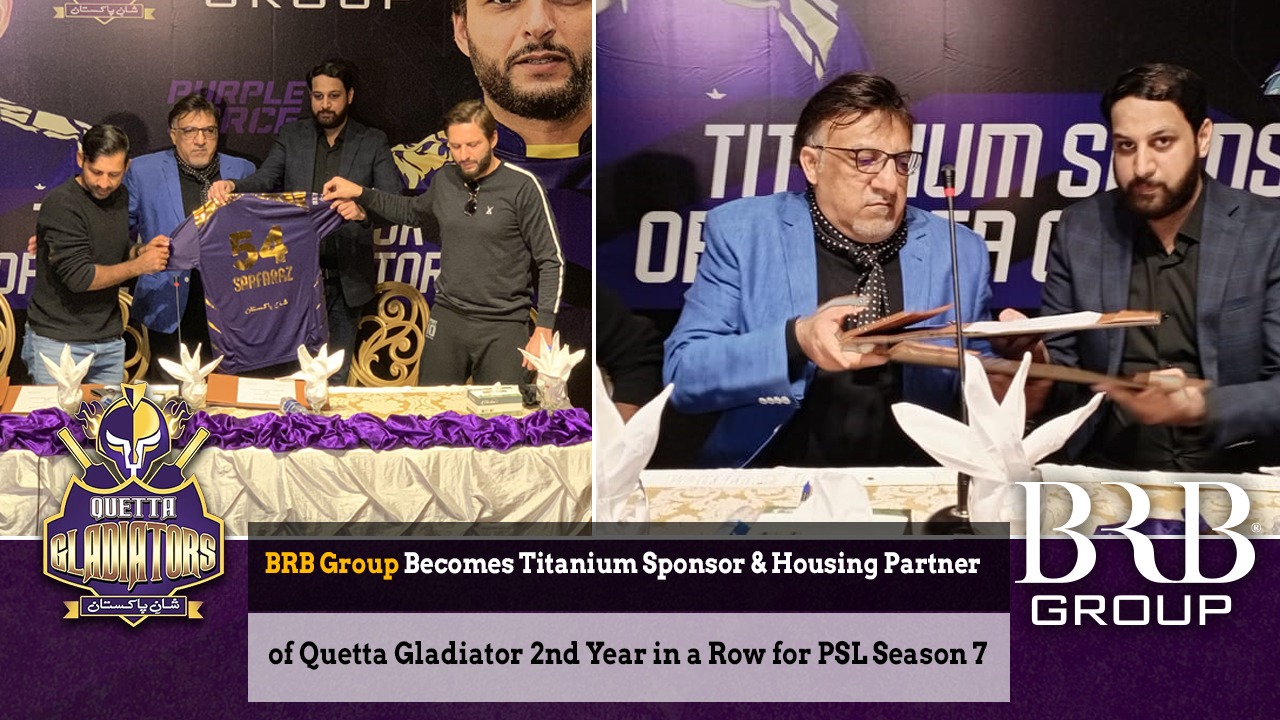 BRB Group, one of the premier real estate builders and developer groups of Pakistan, has once again become the titanium sponsor and housing partner for Quetta Gladiator during HBL Pakistan Super League’s seventh season (PSL 7).

The company’s founders are cricket lovers themselves and take pride in playing their part to bring cricket home.

The sponsorship agreement was signed on 18th January 2022 at the head office of Quetta Gladiators located in PECHS, Karachi which was attended by notable personalities and cricketers including Shahid Khan Afridi, Sarfaraz Ahmed, and the team owner’s son Hassan Omar along with BRB Group Chairman Khawaja Bilal Azam.

While speaking at the event Chairman BRB Group said, “Local companies should come forward and actively participate in such events in any way they can as this will not only benefit just cricket but other sports as well.”

Khawaja Bilal Azam was also of the opinion that BRB Group does not see this sponsorship as an investment opportunity but as a medium to promote local talent and give them an opportunity to make their country proud.

BRB Group is among the very few companies that are proud of their roots and believe in giving back to the community. By sponsoring Quetta Gladiators second time in a row, the company is reinforcing its commitment towards the country and the people of Pakistan.

BRB Group was founded in 2008 to disrupt the real estate development sector and within a very short period has managed to earn the trust of thousands of customers by deploying successful projects.

Oasis Park Residencia is one such project, which met with success soon after its launch. With this project, the company aims to provide the people of Pakistan with an affordable luxury housing solution, so that they live peacefully as per international living standards in a gated community.

Several other exciting projects of high-rise buildings including mixed-used and residential towers are in the pipeline that the company will introduce later this year, are all developed with one thing in mind, to provide state of art and luxury living solutions to the people of Pakistan.

HBL PSL 7 will start with a grand opening ceremony on 27th January 2022 at National Stadium Karachi. People are eagerly waiting for the new installment of PSL and rooting for their favorite teams.

In this season, fans will see Shahid Khan Afridi playing for Quetta Gladiators for the first time, and this was the biggest pick during the players’ draft for HBL PSL 7 as this is the farewell season of Shahid Khan Afridi.

Quetta is all geared up to bring the trophy home leveraging the experience of players like Shahid Afridi, Sarfaraz Ahmed, Ben Duckett, and others.