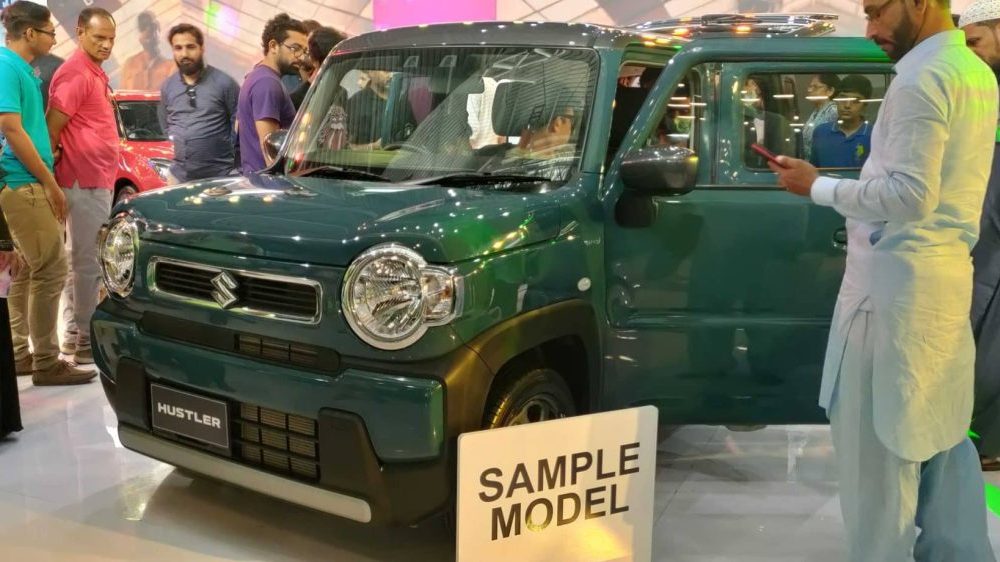 As promised, Suzuki brought out more cars at Pakistan Auto Show 2022, including a 660c Hustler Hybrid, the 7-seater Ertiga. The company also let us take a sneak peek at the Xbee (pronounced Crossbee) urban crossover and Wagon R hybrid that will be revealed tomorrow.

Like yesterday, Suzuki is showcasing these cars at the show to survey and gauge buyer interest and may launch them in the future if there’s enough demand for them.

Starting off with the most familiar one of the four, the Suzuki Hustler is powered by a 660c mild hybrid engine that makes around 48hp in the regular version and 63hp in the turbocharged model.

It manages a decent fuel economy of around 20km/liter. It might be placed right next to Suzuki Alto in Pakistan, but with a slightly higher price and a better interior if it does launch in Pakistan in the future.

Competing with Toyota Avanza or Ssangyong Stavic that Pakistanis are familiar with, Suzuki Ertiga is a 3-row MPV that comes with a 1500cc regular or mild hybrid engine making around 100hp and 130Nm of torque.

It seems like an upscale version of the Suzuki Every, however, it’s actually more similar to XL7 (a 7-seater crossover SUV) which was originally derived from Ertiga and shares some of its design.

If Suzuki Hustler had a big brother, this might be it. Suzuki let us have a sneak peek before the official exhibition due tomorrow, here’s your first look at the Xbee:

Xbee (pronounced Crossbee) is an urban crossover, similar to Kia Stonic, that will be powered by a 1000cc turbo-charged mild hybrid engine, making 100hp and 150Nm torque. Design-wise it looks similar to a Hustler but it’s larger and more powerful.

Although Suzuki revealed the hybrid Wagon R Stingray yesterday, they are due to reveal the non-Stingray Wagon R Hybrid (popularly known as the Japanese Wagon R in Pakistan) tomorrow.

It is also powered by a 660c mild hybrid engine that makes 50hp and around 90Nm torque.