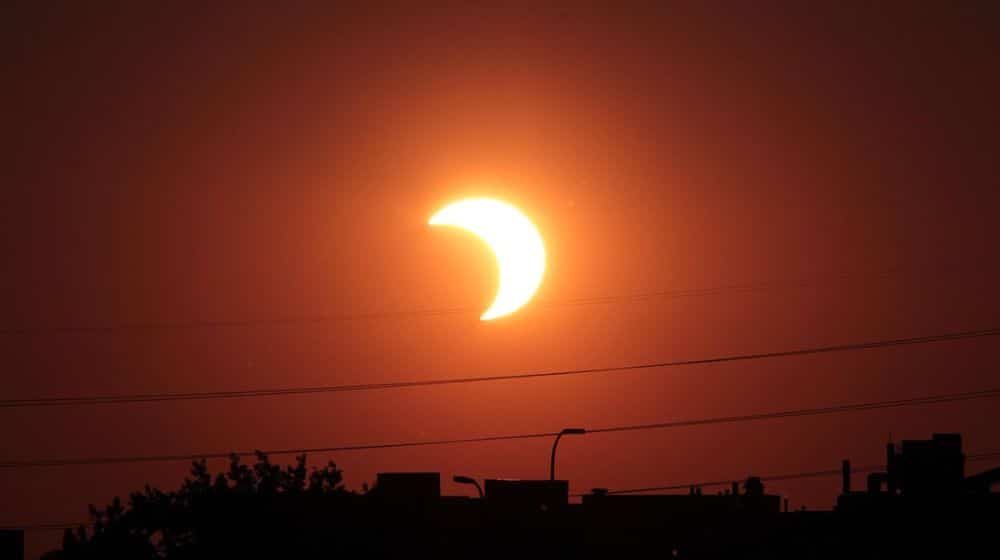 A partial solar eclipse will be visible in various parts of Pakistan on 25 October 2022, as tweeted by the private weather network, PakWeather.

It will be the second partial solar eclipse of the year but the first one that will be visible in Pakistan.

🔴 Partial Solar eclipse will be seen in #Karachi, #Lahore and across whole Pakistan on 25th October 2022.

PakWeather detailed that the eclipse will last from 3:57 PM to 5:56 PM after peaking at 5:01 PM. Note that it will be visible across the country just before sunset.

The partial eclipse will also be visible in Europe, western Asia, and northeast Africa. The first point on the globe where the eclipse will be seen would be Iceland near sunrise, and its last point will be in India, close to sunset.

The first partial solar eclipse this year had been visible in the southern Pacific Ocean, and the southern regions of South America, in the countries of Chile and Argentina. It was seen on 30 April 2022.

A solar eclipse occurs when the new moon, which is otherwise invisible, makes a rare appearance and passes in front of the sun while slowly creating the appearance of a ‘bite’ taken from it. This continues until the moon completely or partially blocks the sun.

Note that it is not safe to look directly at the sun even during a partial eclipse, and necessary precautions should be taken while viewoing it. The National Aeronautics and Space Administration (NASA) also recommends using eclipse glasses to observe the phenomenon.