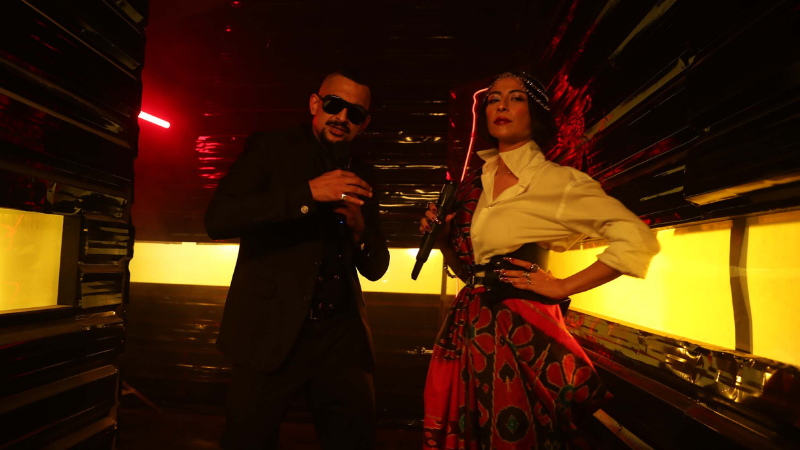 It finally happened! Meesha Shafi and Faris Shafi teamed up for a song! Coke Studio managed to sweep us off our feet yet again.

Coke Studio S14 brought together sibling duo Meesha Shafi and Faris Shafi for its ninth song this season, Muaziz Saarif. The track is an upbeat song asking one simple question: how do these two distinct music styles fuse so well?

However, that happened. And we’re not complaining.

Looks like Coke Studio Season 14 is bringing back the image the music platform had prior to several gaffes last year. This is where trendy music is generated. S14 saw one sweet song after another and the Shafi siblings collaboration is the latest on the list.

‘Muaziz Saarif’ was released on YouTube on February 27 and features Meesha and Faris bringing their unique music styles to the table. Former Nescafe Basement curator, Xulfi is the executive producer for Coke Studio S14. The rocker brought associate music producers ActionZain and Abdullah Siddiqui on board to help create a trendy track for ‘Muaziz Saarif‘.

And a trendy track is what we got. For Abdullah Siddiqui, the single is;

“one of those tracks that when we were jamming everyone was jumping — it’s just so big and catchy, just great pop energy”.

“It’s got their je ne sais quoi, … It’s calling the listener to hear something unfamiliar.”

The song was written by the sibling duo, while Xulfi helped them with the composition.

Muaziz Saarif is definitely a ‘gloves-off” sucker punch to the haters’ kind of single. With both vocalists using wordplay in their own individual styles. While hip-hop artist Faris Shafi threw in jibes all nonchalantly. Rocker Meesha Shafi is far more direct with the daunting dialogues.

Netizens for one are in agreement.

Ooooooooofffffffffff#MuazizSaarif is an absolute banger. Warra song by the siblings, Faris and @itsmeeshashafi. Powerful lyrics and the vocals were killer.#CokeStudio14

There are many fans of Faris’s flow.

Why is Faris rated so high?
Sometimes people don't get it.

Actually, he's among the rare writers to combine Urdu, Punjabi and English in a way that sounds like one piece.
The ease and clarity in his pronouncing is remarkable.

Now, i had to tweet about this song .. if this is not inspired in any way and original stuff .. this is a masterpiece delivered by this team and duo. Especially the rap flow by Faris is awesome (nailed it). Bravo 👏 #CokeStudio14 #CokeStudioSeason14 #MuazizSaarif pic.twitter.com/O7GjhndKrO

The Gal Sun songstress’s queenly entrance in the video was all the rage.

HER ENTRANCE WAS SO ETHEREAL #cokestudio14 #muazizsaarifpic.twitter.com/fdJYNt7PgF

Netizens already have some ideas as to where we’d like to hear more of this song.

What some people didn’t realize was the beauty of the music video. That entire video was shot in one take. Not kidding! So who’s the wizard that managed to do so? Kamal Khan.

What are your thoughts on Muaziz Saarif by Meesha Shafi and Faris Shafi? Is it a banger or what? Let us know what you think in the comments below.