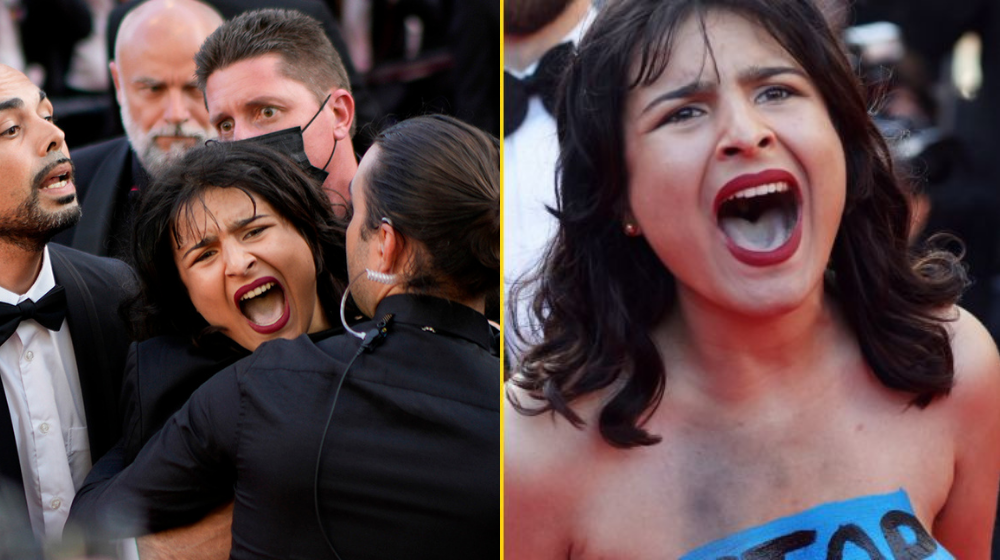 With the 75th annual Cannes Film Festival brewing splendor, pomp, and show with celebrities acing their fashion game. A woman stripped off all of her clothes screaming at top of her lungs ‘Stop raping us!

She went topless to promote a message against rape written on her body and crashed the Cannes Film Festival red carpet premiere of George Miller’s ‘Three Thousand Years of Longing’. The topless woman with Ukraine flag colors painted all over her body, scuttled naked on the red carpet amid celebrities and in front of the assembled photographers. She was wearing only panties and had the word “scum” written on her lower back. Blood-red paint also appeared on her back and legs. The lady was trying to symbolize Ukrainian women to convey the message of them being raped by Russian military men. Since the beginning of Russia’s military operation in Ukraine, there have been numerous reports of Russian soldiers raping Ukrainian women.

The radical-feminist activist organization Scum turned to their Twitter and stated that;

Security guards were seen rushing over to her and covering her with her dress while she fell off to her knees.

The incident created a buzz among people, leaving many confused about how this woman entered the premises of Lumiere theater in the Palais that has required multiple security checks. 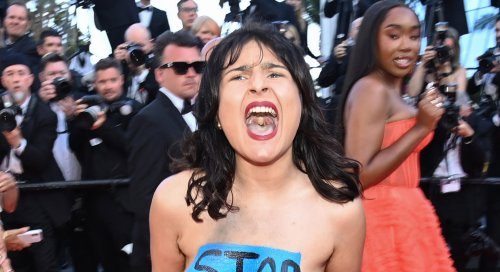 According to Variety, guards are positioned outside of the carpet at stations that require attendees to walk through a metal detector. Once an attendee gets through that checkpoint, they meet more guards at the start of the carpet that directs them when they are allowed to enter the theater. The red carpet itself is lined with security.