Vishnu Dev is a Sindh based community mobilizer and a social activist. He works for the rights of Hindu minority in Pakistan and writes blogs for Hive Pakistan’s project Ravadar – a blog series that documents stories of religious minorities living in country. 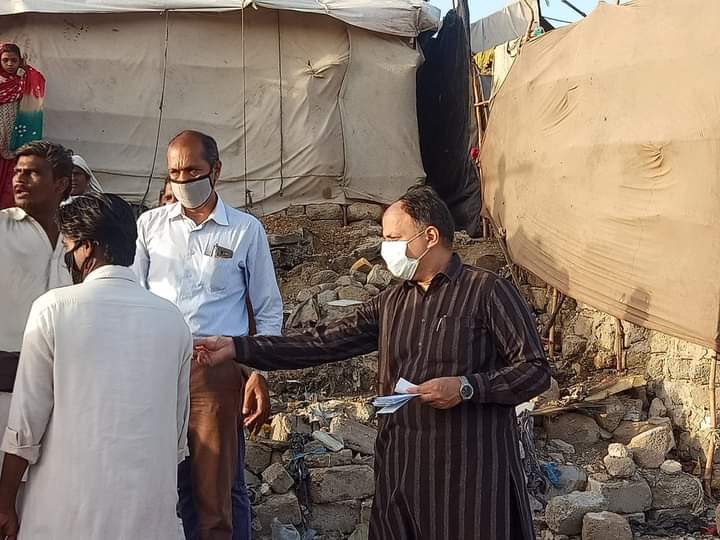 Social welfare workers, doctors, and young social activists came to the fore from the religious minority community in order to alleviate the ills of COVID19.

The pandemic COVID19 brought a multifaceted crisis for Pakistan. As thousands of Thalassemia patients were suddenly exposed to a shortage of blood supplies, a few philanthropic members from a religious minority community stepped forward to help.

Mr. Binaish Kumar, a Hindu man from Karachi started a blood donation drive in collaboration with Fatimid Foundation that provides blood transfusion facilities. Underprivileged localities such as Garden West, Lines area, Saddar and Shree Swaminarayan Temple were covered by the team providing this critical service to blood patients in quarantine.

The thalassemia patients were at a risk of dying due to decreased donor attendance and unavailability of blood supplies. The restrictions imposed on mobility to control the spread of coronavirus affected the availability of blood samples, reagents, bags and other products needed to draw, test and store the blood.

As the pandemic began to spread in Pakistan, the focus of healthcare bodies converged on its control and recovery, inevitably resulting in a general neglect towards other diseases.

Unfortunately, the issue of blood transfusions for thalassemia patients remained unattended. Three to four pints of fresh blood is required by each patient every month, and that emerged as a challenge due to the lockdown in Pakistan.

Binaish helped save countless lives by offering his services for the sake of sufferers.

He also launched a ration distribution drive to help the needy families. Healthcare facilities and medicines were provided to the patients of Lyari and Quaidabad with his support.

Binaish Kumar, the Hindu hero, arranged ambulance service for safe transportation of patients to the healthcare centers by collaborating with Indus Hospital. Binaish Kumar is among the unsung heroes from religious minorities who worked for the people keeping aside the classification of class, religion or ethnicity.

A young lady doctor, Sana Ramchand, worked as a frontline fighter while serving to save the lives of fellow Pakistanis. Dr. Ramchand has been practicing in Civil Hospital Karachi and is dealing with the COVID-19 patients kept in isolation centers.

“I haven’t been home for months and barely find the chance to call my family, which is settled in Sukkur,” shared Dr. Sana Ramchand. “I often find myself skipping meals to treat the patients. There have been times when I couldn’t sleep for consecutive nights due to an exceptionally occupied duty schedule as the outbreak was at its peak,” she added.

Mr. Jai Dev, a student of NED University, Karachi, is a young social activist and is currently serving as the General Secretary of Pakistan Hindu Youth Council (PHYC).

“This is high time we should join hands as a nation and serve the people regardless of their religious identities and ethnicities. We are trying to promote interfaith harmony and peace in the society through our actions, during these trying months”, said Dev.

Jai Dev volunteered in collecting funds with the help of his university fellows and some Hindu businessmen to distribute ration bags among the poverty-stricken families living in Lyari, Quaidabad and Orangi Town.

Dev in collaboration with PHYC also organized an Iftaar drive for Muslim police officers, paramedical staff and other workers who were working around the clock in Ramadan during the period of quarantine.

“I was really shocked and hurt to know that religious minorities are facing discrimination at the hands of Government and civil society organizations in the distribution of relief funds,” told Vinod Kumar a 28 year old Hindu resident of Karachi.

“I decided to raise funds so I can help them, particularly my own Hindu community. We chose social media as a platform and initiated a digital fundraising campaign” Vinod shared. “The response was overwhelming as many kindhearted strangers came forward to help the local minorities. And with their support, we were able to reach out to approximately 600 households in districts Badin and Thatta of Sindh province”, added Kumar.

The pandemic had a dramatically disastrous effect on the economy, survival and well-being of people everywhere in the world. In Pakistan, a developing country with limited resources and supplies, some of the minority communities were denied financial aid on the basis of their religious beliefs.

In these circumstances, let us all pay tribute to all the unsung heroes who took the lead and offered their services to make a difference. We are indebted to all the frontline doctors, philanthropists and social workers who served humanity by risking their own lives and proved themselves to be real heroes of the nation.
This article is produced by Ravadar– A blog Series presenting stories of religious minorities in Pakistan.