Mahesh Rana is a Sindh based community mobilizer and a social activist. He works for the rights of Hindu minority in Pakistan and writes blogs for Hive Pakistan’s project Ravadar – presenting stories of religious minorities in Pakistan. 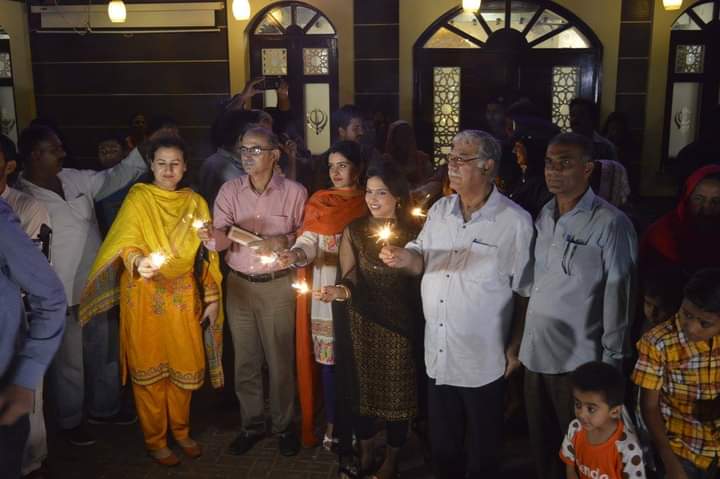 Stand first: The festival of lights, Diwali, was celebrated with religious fervor in Karachi.

Hindu community celebrated the religiously significant day of Diwali in the bustling metropolis of Karachi. This was mid-November and the conversation about the second wave of Coronavirus was already in the air. But, amidst caution and celebration the community managed to generate some joy through the occasion.

Diwali qualifies as the largest annual festival of the Hindu community. In line with its religious value, the day is believed to be important for his connection with Lord Rama. He returned from an exile (Vanvas) of 14 years, with his wife Mata Sita and younger brother, in Ayodhya.

Lord Rama’s followers as well as the residents of Ayodhya lit the entire city with diyas, the little oil lamps. Lighting lamps (diyas) is indispensable for Diwali celebrations.

The district government issued an allowance for the Hindu community to celebrate however they would like to, with precautions in place. This gesture was felt with a positive feeling by the community, occupied with the festivities, while following the SOPs in Karachi.

“My Muslim friends came to celebrate Diwali with us”

“On 14th November, 2020 a Muslim friend of mine by the name Adil Ahmed called me in the morning. I woke to his voice wishing us a happy Diwali” Jai Dev, a 25 year old engineer in Karachi shared with me.

Adil expressed his desire to celebrate this festival of lights with the local Hindu community. We decided on a plan, centered on celebrating Diwali at the centuries’ old temple Swaminarayan Mandir, Dev adds.

Swami temple is the biggest temple in Karachi and a site of such significance that the Hindu community often gathers here for the festivals. “I reached the temple’s main gate by 7pm, and was received by the security guard who asked to see my CNIC”, Dev continues that he along with a bunch of Muslim friends were let in with a hearty smile.

The main entrance of the temple, as well as the streets were lit. The homes falling in the vicinity of the temple were also sprinkled with lights. “We found the temple decorated with glowy lights, candles and Diyas (oil lamps) – it looks so beautiful that for a while it felt like we were in another realm”, Jai Dev spoke on the behalf of his peers as well.

He goes on to add “we enjoyed fireworks till 9pm, and then joined the Aarti-Diwali Pooja (prayer ritual) in the temple ground”. Hordes of worshippers had gathered for pooja. Right after the completion of aarti Dev and his Muslim friends decided to meet the Hindu community around the Swami Narain temple.

Suman distributed sweets and gifts with maids, guards on Diwali

The sad lull created by the Covid-19 lockdown left many families yearning for something to cherish. Suman Kumari, 26, lives in the locality of Swami Narain temple. “My family was waiting for Diwali, to gather and celebrate as a community. It was much needed after the long stretch of social isolation and depression  in these past couple months”, Kumari tells.

Suman and her family did not visit the temple on the day of Diwali fearing the onslaught of the second wave, but “my Muslim friends from office showed interest in joining us in our festival and came over, in fact they loved the Diwali special dishes/sweets” in her words.

“I and a few friends joined hands for fundraising. We bought clothes and other essentials from the collected amount. Our little team went around and handed those happy packages to Hindu security guards who were on duty during Diwali” Ms. Kumari shared with a sense of satisfaction. The idea was for the guards to also celebrate towards the day’s end.

“We even bought Diwali dresses for my maids’ children,” adds Suman Kumari.

The happy occasion wasn’t as happy for a few as it was for others. It was unfortunate that another family in the neighbourhood of the temple could not celebrate. Teerath Das, 62 years of age, is a father to two daughters and a son.

“On Diwali we had just lit a diya, an oil lamp, in our home”, Teerath continued, “there was no money to buy lights or new clothes for the family”. His is a poor household and could not afford the fun of the festivities.

The unique challenges due to the pandemic pushed people deeper under the poverty line. Countless workers lost jobs, daily wagers had no option but to sit at homes, vendors could barely sell.

“Diwali is Diwali whether one lights a diya or dozens of them. The main thing is to keep your heart bright with an empathy for humanity alive”, Teerath told. “Our children could not get anything, so they slept to the sound of fireworks and crackers without celebrating”.

This blog is produced by Ravadar – a blog series documenting lives of religious minorities.