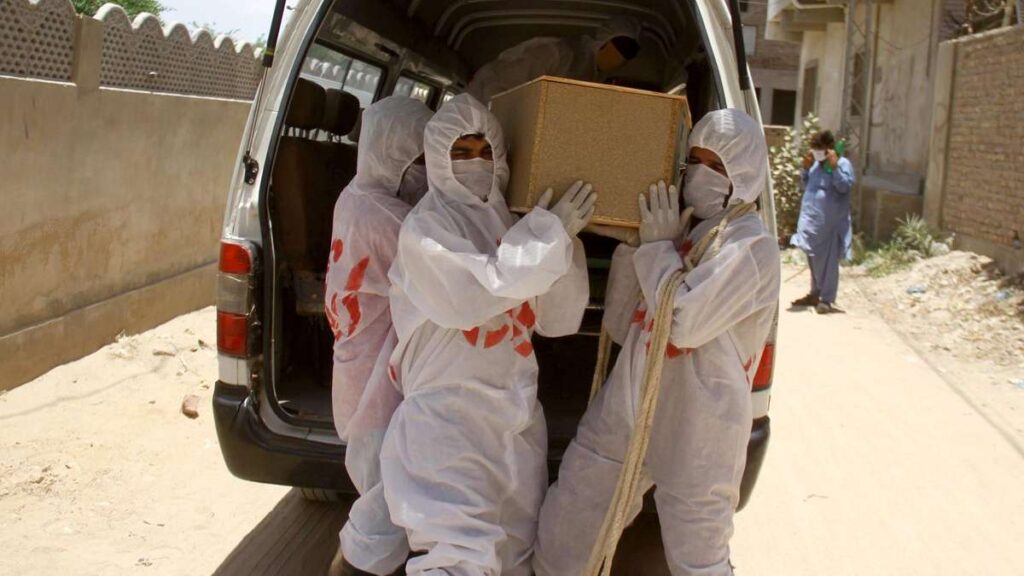 When everyone was advised to stay at home and protect themselves against the prevalent pandemic, a few brave beings stepped out to help the rest. They are the unsung heroes of the pandemic from the Shia community, working for all alike.

While Pakistan is facing a more lethal second wave of Coronavirus, it’s important to recall the services of individuals, as well as groups, who worked tirelessly for the collective consolation of the people.

In my experience as a community engagement resource, I came across a few initiatives that were not only unique but also designed to offer hope and relief to the larger social family.

On April 15th, news broke in Gilgit that a COVID-19 patient was buried without a funeral bath. None of the death rituals could be performed for the deceased. A few days later, another dead body was reportedly buried along with its belongings, like cellphone and wallet, in order to avoid the slightest chance of contact with the virus.

“We knew something had to be done about it”, expressed Muntazir, who leads the ISO (Imamia Students Organization) team of volunteers. They took on the task of performing the funeral rituals of those who died due to the pandemic.

A suffuse of fear surrounded the final rites of those caught by the deadly shackles of Covid-19 in Pakistan, Even the close relatives were advised to grieve from afar. Muntazir and his young team decided to brave their way through the risk to ensure that a decent closure is given to the deceased’s families.

The pandemic had created a unique scenario for all. The selfless few who decided to help alleviate the suffering for the rest emerged as heroes of humanity. The ISO volunteers took a few training sessions from professional doctors and the required number of Personal Protective Equipment (PPE) kits so as to safely serve the community.

The very first case handled by the team was that of Mehdi Shah, brother-in-law of Murad Ali Shah, who is the serving Chief Minister of Sindh. “Since our first case, four to five bodies on average are taken care of every day by our dedicated team”. These volunteers were means of relief for people distraught due to the demise of their loved ones.

“There were days when we gave baths to eleven bodies, one after the other. We used to get phone calls in the middle of the night – unknown people asking us to perform the rituals on their behalf, while they stood hundreds of meters away”, recalls Muntazir. When asked about what motivated his team to take up such a daunting task, Muntazir referred to the teachings of Imam Hussain (a) to selflessly serve mankind.

The pandemic pushed Pakistan towards a lockdown. And the lockdown sent countless daily wagers home, without bread to break. They were left struggling, without options to feed their families. Hawkers and street vendors were badly affected during this period. The poor could not afford or access medical facilities.

A project, by the name Fatimiyah Short Stay Oxygenation Unit (FSSOU), was set up in Karachi during the pandemic. It was an outcome of the joint effort by Khoja (Pirhai) Shia Isna Asheri Jamaat (KPSIAJ), Imamia Medics International (IMI) and Fatimiyah Hospital. The short-stay system served to save many lives.

The Fatimiyah Short Stay Oxygenation Unit (FFSOU) was set up at Fatimiyah Montessori in Soldier Bazar, a locality in Karachi, to provide free medical services to the people.

“It was the time when Covid-19 patients were unable to get proper medical treatment in the hospitals. We decided to launch a public health facility accessible to all so they could get an immediate and quick short-term nursing”, explained Dr. Ali Abbas, one of the founding members of the unit.

“The public hospitals were facing a shortage of ambulances, beds, equipment and other medical supplies”, Dr Abbas adds. He continued that in an attempt to tackle the challenge, the team decided to create a short-stay unit in the vacant Montessori. The unit would provide the patients with an initial treatment, oxygenation facilities and temporary stay under the supervision of a qualified team of doctors until they either recover or manage to get into an isolation ward or a designated hospital for the treatment.

The Sindh Health Board appreciated their efforts for providing quality medical treatments and keeping up the international health care standards without any aid, funding or Government’s support.

After the need was over, the Montessori was thoroughly disinfected, as the educational institutes were expected to open after the lockdown was eased. FFSOU has donated all of their equipment to the local hospitals of Karachi. The service was a contribution in offering relief to the infected patients during the pandemic.

“Who Is Hussain” Reached More Than 17000 Families

Another team in Pakistan that arose to respond effectively to the cries of the poverty-stricken people was ‘Who Is Hussain’, an NGO serving people in over 90 cities of the world. During the lockdown, the team provided ration bags to 17,608+ families all over Pakistan including remote areas such as Astore, Kashmore villages and small towns.

Ali Abbas, Who Is Hussain’s representative in Karachi, said that religious or ethnic associations have nothing to do with the campaign’s preference of ration distribution. The only thing that mattered was if the beneficiary was in need of relief.

“2020 has been a tough year for everyone – and almost everywhere. Our campaign aims to inspire people and offer hope. We wish to stand up against all forms of social injustice and help everyone beyond the gradients of identity”, said Abbas.

This blog is produced by Ravadar – a blog series documenting lives of religious minorities.