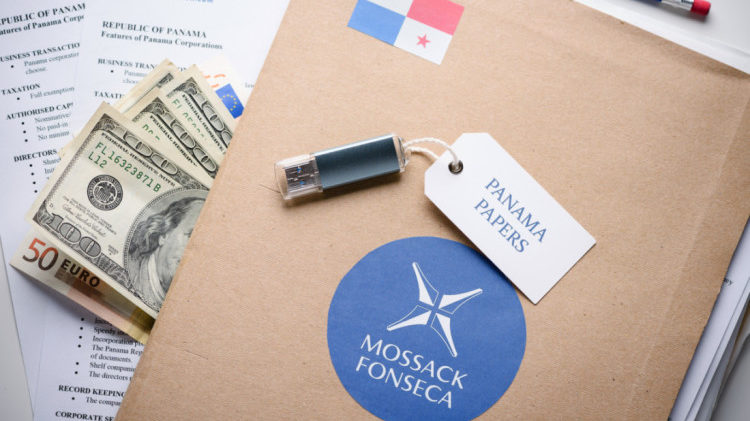 On April 3rd 2016, the biggest data leak in the world revealed the offshore secret companies of 260 Pakistanis.

The Panama Papers is a collection of email chains, invoices, and documents used for off-shore accounts. It contained 11 million confidential documents that were evidence for the wrongdoings of many business elites and national leaders across the world. The Panama Papers disclosed the information of all the international tax havens, used by the rich and powerful.

ICIJ provided public access to the database containing ownership information of off-shore companies held by many business elites and political heavyweights of the world.

The data shows information of companies established in 10 different off-shore jurisdictions since 1977 until 2015. The current data reveals 200,000 off-shore entities formed by wealthy individuals around the world.

Pakistan ranks among the top holders with locals of Karachi having the highest number of off-shore companies, followed by the people of Lahore and Islamabad. The data reveals 153 companies registered in British Virgin Islands, 43 in Panama and 37 in Seychelles.

Read more: 38% Believe PM Nawaz Faked Surgery to Get Away from Panama Leaks

This is due to the political instability foreseen by people, as the military dictatorship was phasing out and democracy was being adopted. Investors were very uncertain with what the country’s situation would be after the process. 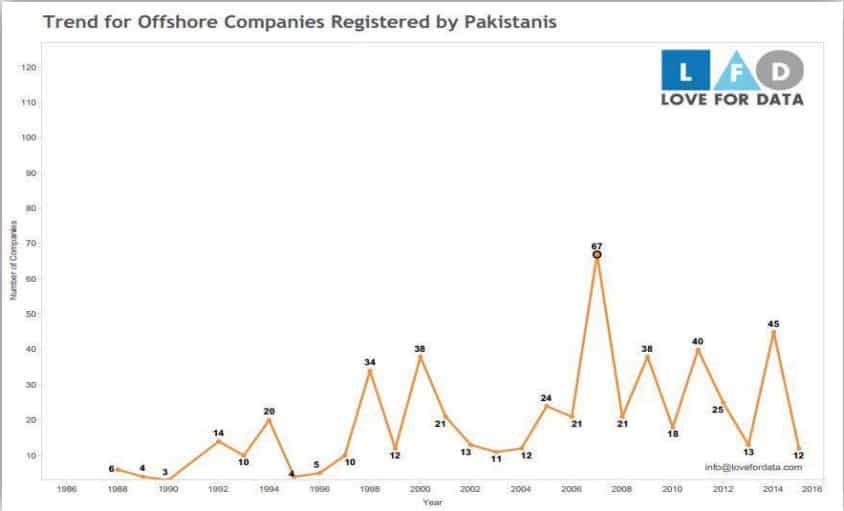 The favorite month for off-shore registration is May. This is probably done to avoid taxes which get due at the end of June. 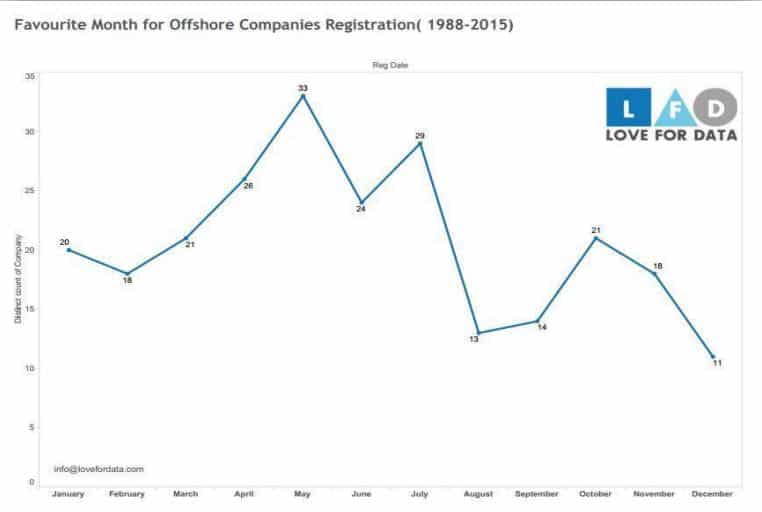 According to Panama leaks, members of many reputed families of Pakistan have been holding off-shore companies. Most of these families are from the metropolitan city of Karachi, which has the highest number of off-shore account holders. The city-wise distribution is shown below: 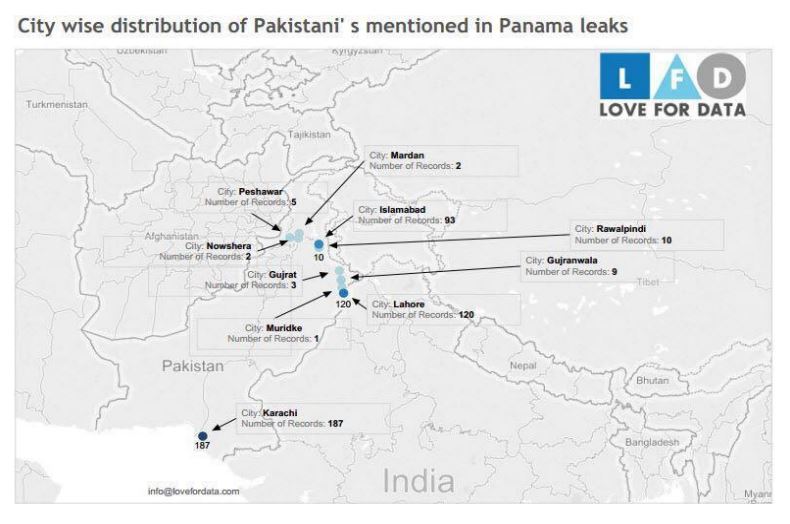 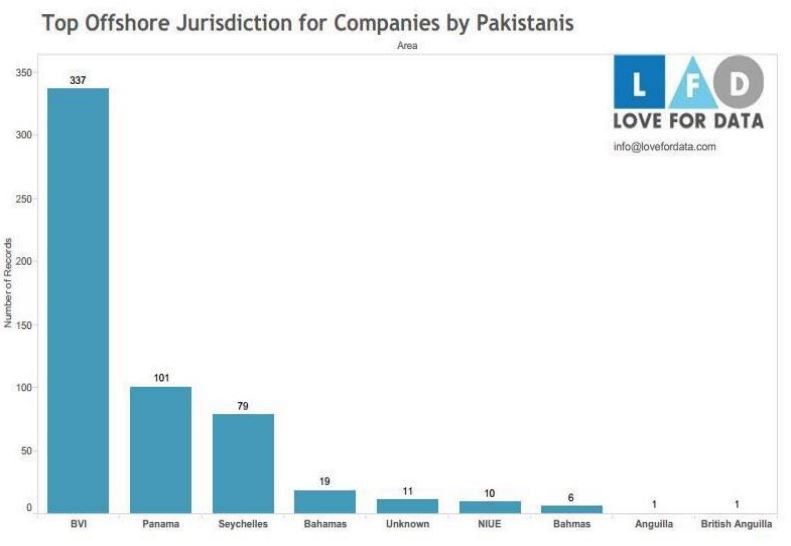 Some of these companies date as far back as 1988 and have closed down long time ago, while some are still listed and active. People with surname “Ahmed” have 32 offshore firms. To give you a clearer picture, each circle in the following picture depicts surnames with 4 or more offshore companies. 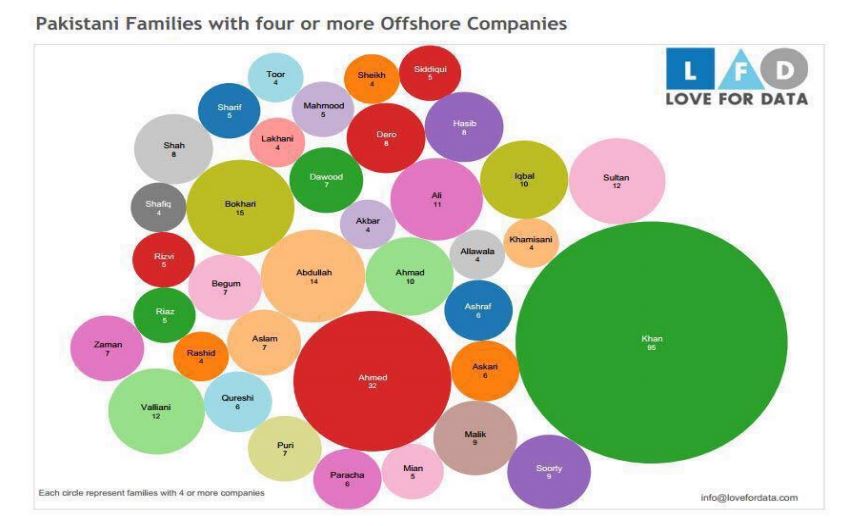 Pakistan, being a developing country with a huge debt profile and financial instability, has many citizens with off-shore investments and this is hurting the economy.

Using data effectively to study behaviors and predicting responses to different policy changes can help with highlighting such practices. Financial advisors and policy makers should increase regulations and provide more security and stability in order to discourage this practice.

Writer is the Chief Data Architect and Partner at Love For Data, a data science consulting company, specializing in artificial intelligence and machine learning for businesses. He specializes in developing decision support systems for business, improving efficiency and increasing profits along the value chain.