More than four thousands contract employees of PTCL are on continuous strike for last couple of weeks, who are continuously demonstrating before company headquarters in Islamabad.

I had an eye on number of news items being published in various newspapers, and also observing them on daily basis as PTCL head office happens to come across route to my office. I was rather surprised on the consistency of these PTCL employees and also shocked at the coolness of PTCL administration. With mixture of feeling, today I spoke with them personally, and heard what they are actually up to.

Mr. Malik Maqbool, Secretary General, PTCL Staff Alliance is heading the crowd. He told that they are 4000 employees, which were hired by PTCL back in 1992 on contractual basis. He said other 7,000 employees have got their permanent status but these remaining 4000 are still struggling for their jobs. He alleged PTCL of showing favoritism. “We all are poor people, and also the working strength of PTCL, we need nothing but permanent status of our employment” said Mr. Maqbool. Despite of promises from higher authorities including Ch. Shujaat, the Prime Minister than in 2002, PTCL management did nothing to secure their employment. 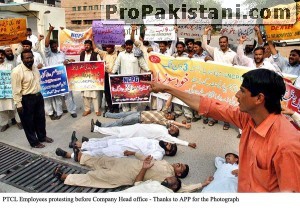 He said that there went a meeting with PTCL management yesterday without any outcome due to PTCL administration behavior. Malik was of the view that PTCL is firing the thousands of labor staff and in contrary very high paying officers are being hired. These dual standard of PTCL management are very undue and a curb on the devoted employees who have served the company for years.
Nawa-e-Waqt today reported that a protestor named as Hamid Mehmood has declared that he will commit suicide in case their demands are not met. Paper says that Abdu Rehman injured his hand when the meeting with PTCL administration went void.

I could not get version from PTCL administration; however, it is very much obvious that PTCL is not in any mood of resolving the issue. PTCL has called for additional rangers and Police at their head office to tackle any unpleasant incident.