Pakistan Telecommunication Authority has finally issued its quarterly report on Pakistan Telecom Industry for first quarter of year 2008. In coming few days I will focus on the report and will extract the summarized information for ProPakistani Readers. In today’s post I will mainly focus on telecom sector’s economic facts and figures.

Following the trends of other industries in Pakistan, Telecom sector showed a significant decline for local and/or foreign direct investments . Only major investment was by Oman Telecom when they reached a deal with World Call to purchase its 65 percent shares that valued US 200 million dollars.

Along with a nominal portion of investment (compared to previous periods) was contributed by cellular companies who are pushing their network further into the country side. Cellular companies spent total of US 433 million dollars in this quarter. However, recent investment announcements made by Warid and Zong is going to reshuffle this graph in coming 1 year. 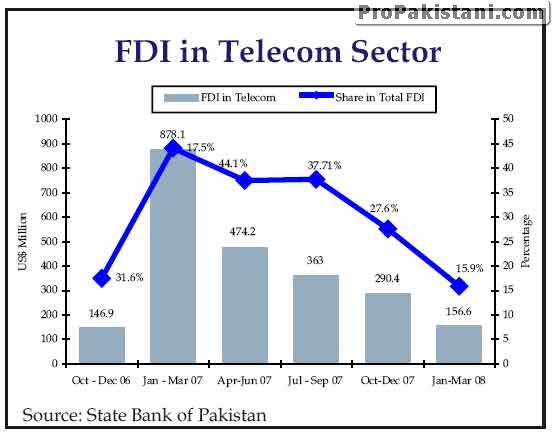 During the first quarter of 2008, total of US$ 156.6 million were brought into Pakistan under FDI account; which showed a decline rate of 47 percent when compared to previous quarter. This decline was due to geo-political situation and instability in the country, resulting overall decline of FDI by 17 percent. Another reason that may come into consideration for low FDI is due to the fact that local financial market has enabled cellular companies to generate revenues locally. 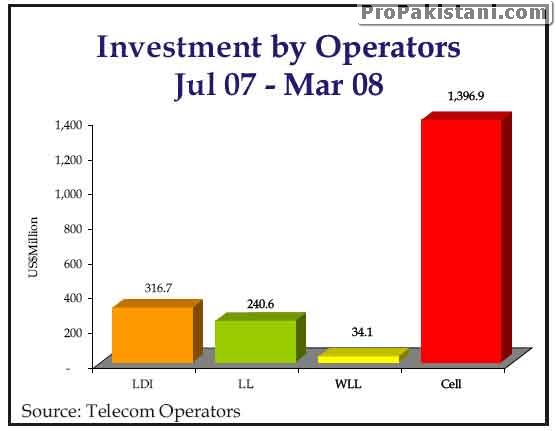 We all know that Telecom sector has been greatly contributing to the national exchequer through GST, CED, SIM Activation Tax, withholding tax, regulatory fee, contribution for USF and other duties. 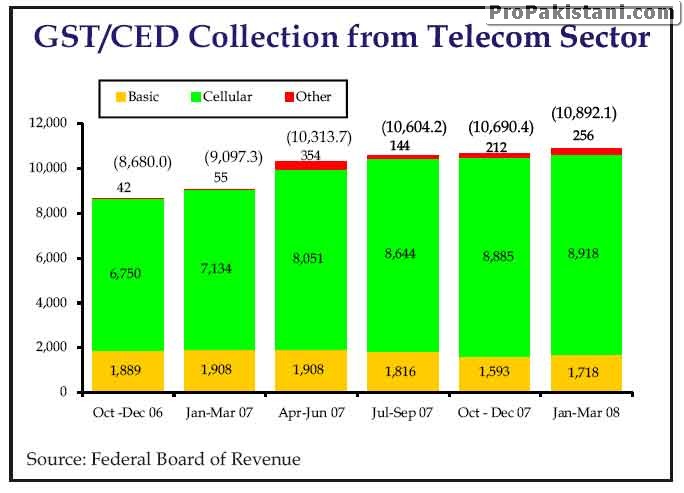 Price war amongst the telecom companies has taken down the prices towards the lowest possible limit. Consequently, the CED and GST contribution has poised. Despite the addition of over 25 million customers in cellular base in 2007-08, the net increase in CED/GST was notable at all.

In first quarter of 2008 total of PKR 10.89 billion was given away to government by telecom companies/subscribers under these taxes, which is almost the same as of three previous quarters.

Mobilink Leading here for GST/CED contribution with PKR 3576.6 million, Telenor stands second with PKR 2438.5 million. Notable point about Ufone is that they contribute almost half of Telenor’s share, that is PKR 1275.2 million; Ufone stands at third slightly ahead of Warid Telecom which gave away PKR 1118.2 million. New enterant, Zong is at fifth with PKR 508 million…we may see their share climbing up in coming months.

PTA has included cellular companes’ revenues stats for the first time in their quarterly report, which clearly suggests the performance of cellular companies in terms of revenues. Mobilink again leading the gang, with Telenor at second slot. Ufone and Warid are lagging far behind. 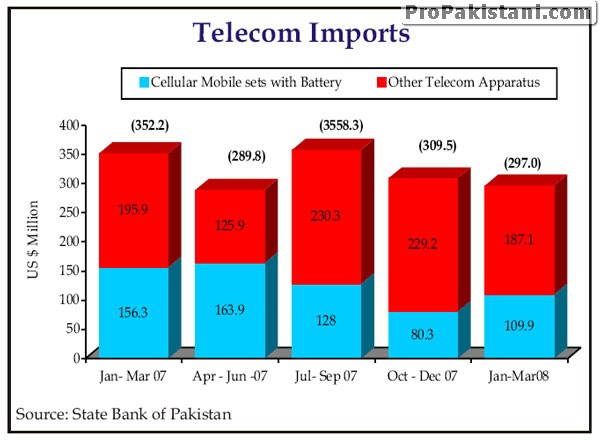 Note: All stats, graphs, and other details are taken from PTA’s quarterly Report for Q1 2008. Please let me know if anything is wrongly quoted or needs any addition.