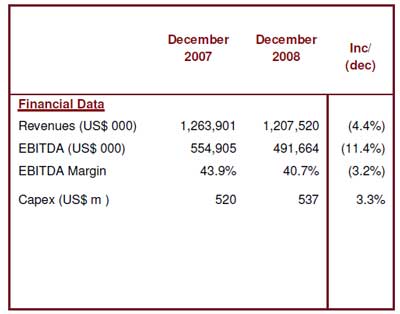 Recently announced annual report of Orascom for year 2008 reveals that Mobilink closed the year with revenues of US$ 1,208 million and EBITDA of US$ 492 million. Report says that In local currency terms revenues in 2008 were up 12% reaching PKR 86 billion while EBITDA reached PKR 29.5 billion, up 2.5% over 2007. The decline in price per minute coupled with the depreciation of Pakistani Rupee resulted in an overall decrease of ARPU in terms of US Dollars. 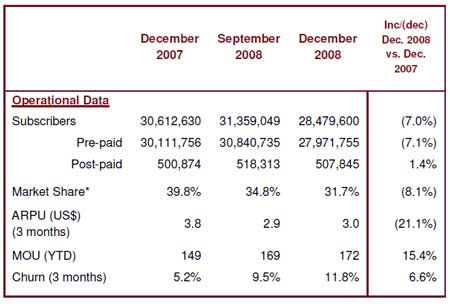 By the way, revenues declined in USD but at same time they showed increment when calculated in Pak Rupees – Thanks to lowering value of PKR.

I am pasting text from this report for your review

During 2008, Mobilink invested USD 537 million in its infrastructure, as compared to USD 520 million in 2007. This capex was primarily targeted to enhance the capacity, network quality and coverage. During the year, Mobilink added 1,487 new cell sites to its network, taking the total number of the cell sites to 7,915.

As per Pakistan Telecommunication Authority (Regulator), Mobilink’s market share in December 2008 was 31.7%. This market share is based on information disclosed by other operators which use different subscriber recognition polices. According to internal reporting, Mobilink has a market share of 41.6%. The decrease in the net subscriber base fully reflects the impact of the new 90-day validity regime. The new regime encompasses the customers that have performed any type of activity (except incoming SMS) in the last 90 days and is in line with the regime applied across OTH’s subsidiaries.

During the year, the federal government raised the sales tax on telecommunication services from 15% to 21% and also imposed a duty of PKR 750 on all imported mobile handsets. This was accompanied by stringent sales registration policies and decrease in the interconnect charges by the Pakistan Telecommunication Authority.

In the course of 2008, Mobilink introduced a call set up fee for the first time in the industry with the launch of its new prepaid tariff ‘Jazz One’ thereby preserving value while providing a competitive on-net rate. To reward its high value customers, Mobilink launched ‘Club Red’ which offered discounted calls to high usage customers. To bring back dormant subscribers, Mobilink launched three revival campaigns in April, August and December.