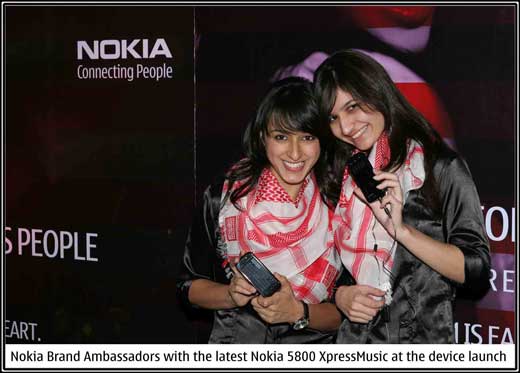 Nokia Pakistan announced the Nokia 5800 XpressMusic for Pakistani youth. The device is the latest offering in the XpressMusic series with the touch feature for the first time. Nokia got associated with music with the first music device in 2003 and XpressMusic has become part of youth’s life all around the world. By the end of 2008, Nokia has sold 425 million devices with a digital music player making Nokia the world’s largest manufacturer of digital music players. Also Nokia has sold more than 700 million devices with FM radios.

“Pakistan has a 32.9%* population between the age of 15 and 35 for whom music is the single most wanted entertainment. Nokia XpressMusic series is all about the youth and music lovers and 5800 is the most hip and easy to use device with optimized music performance. Nokia Pakistan will continue to enhance the music experience on the devices and enable consumers to listen to the music they want anywhere anytime. ” said Afzal Shahabuddin, Director Marketing Nokia Pakistan. 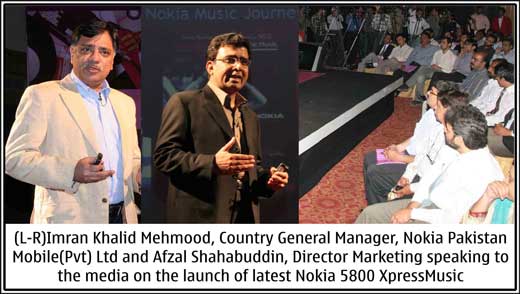 When it comes to music phones, people all over the world want a device that is a great music experience – more memory, loud and powerful speakers, and easy synchronization – and must still work well as a mobile phone with direct access to important contacts and content. The Nokia 5800 XpressMusic delivers on the perfect combination of play, share and touch.

“With the Nokia 5800 XpressMusic, we set out to connect people through the one thing we all feel a universal connection to – music,” said Imran Khalid Mahmood, Country General Manager Nokia Pakistan. “The way in which people enjoy music is different around the world. With that in mind, the Nokia 5800 XpressMusic gives people the freedom to experience music they love in the way they prefer.”

Taking advantage of touch screen technology, the Nokia 5800 XpressMusic introduces the ‘Media Bar’, a handy drop down menu that provides direct access to music and entertainment, including favourite tracks, videos and photos. The Media Bar also offers a direct link to the web and to online sharing. Because the Nokia 5800 XpressMusic supports Flash content, individuals can surf the entire web, not just pieces of it. In addition, the Nokia 5800 XpressMusic offers all the music essentials, including a graphic equalizer, 8GB memory for up to 6000 tracks and support for all main digital music formats, and a 3.5mm jack. Built-in surround sound stereo speakers offer the industry’s most powerful sound.

Ensuring a seamless music experience, Nokia 5800 XpressMusic also provides easy access to browse and purchase tracks from the Nokia Music Store, this is not available in Pakistan at the moment. The newly updated Nokia Music PC software allows for easy drag-and-drop transfer of songs and management of any music collection.

“As Nokia’s first mass-market device with a touch screen, the Nokia 5800 XpressMusic turns a ‘user interface’ into a ‘human interface’ by truly putting people first. For example, we’ve introduced the Nokia Contacts Bar, which is like a digital RSS feed on your life,” said Imran. “By adding the benefits of touch screen technology to S60, the world’s leading smart phone interface, Nokia is taking the familiar and giving it a human touch. We have used touch technology where it really adds value such as the Contacts Bar, Media Bar and clever shortcuts from the home screen to menu items such as calendar, profiles and clock. ”

For the best screen resolution available on a mobile phone, the 3.2” widescreen display brings photos, video clips and web content to life in vibrant color and true clarity. With a 16 by 9 aspect ratio and 30 frames-per-second playback and recording, the device is ideal for VGA quality video recording and playback.

The Nokia 5800 XpressMusic also features a 3.2 megapixel camera with Carl Zeiss lens and, with a single touch, images or videos can be shared via a favorite online community, such as Share on Ovi, Flickr, or Facebook. Music play list song titles can also be shared through Bluetooth, MMS or online sharing.

Music for the masses

The Nokia 5800 XpressMusic supports 60 languages worldwide, which covers nearly 90 percent of the world’s population. As people around the world use their phones in different ways, the Nokia 5800 XpressMusic offers a variety of input methods including a virtual alphanumeric keypad, a virtual computer-style QWERTY keyboard, a pen stylus – and for true music enthusiasts, a plectrum – are all available.