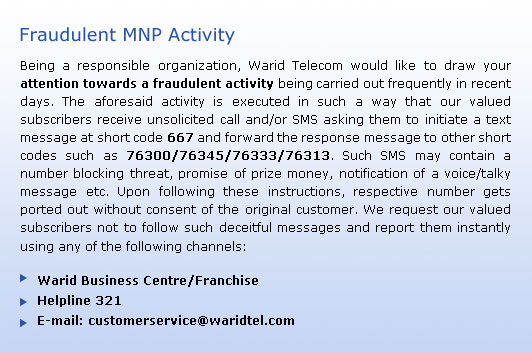 Warid has alerted it’s customers of fake MNP text messages that they may get from random mobile numbers.

MNP (mobile number portability) scams are increasing in Pakistan, as we have seen many cases where consumers reported that their SIMs got blocked and when investigated – it was found that SIMs  were ported out to other network, because they had replied to those MNP scam text messages.

A similar case and detailed discussion on this issue was done earlier and it was revealed how these scams actually work.

Cellular companies were totally ignorant on the issue and we didn’t see any action taken or even a notice regarding the said issue.

But, Warid has taken the lead and becomes first operator to alert its subscribers about such scams. Warid has mentioned some short codes as well so beware if you are one of those preys.

Following is the message Warid is circulating:

This step by Warid is highly appreciated and other companies should circulate such awareness messages through all possible channels so that these scams may be reduced as much as we can.