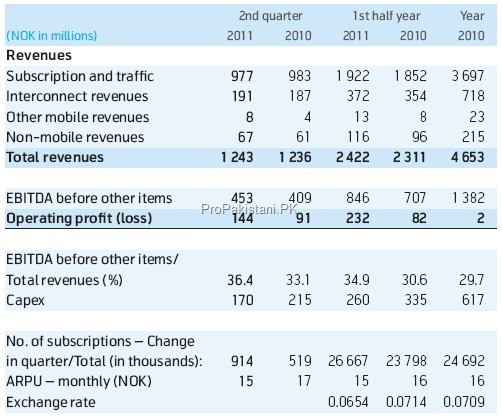 Telenor Pakistan generated total revenue of PKR 19.63 billion (NOK 1,243 million) during second quarter of 2011, slightly up from 19.50 billion (according to current date exchange rate) during the same period last year.

Company said that operating profits grew to PKR 2.27 billion in reported quarter, up from from PKR 1.45 billion during the same period in 2010 mainly due to controlled operating cost.

Earning report said that the number of subscriptions increased by 914,000 during the quarter and the subscription base was 12% higher than at the end of second quarter
last year.

Telenor managed to enhance ARPU in local currency, which increased by 3% due to higher average usage. 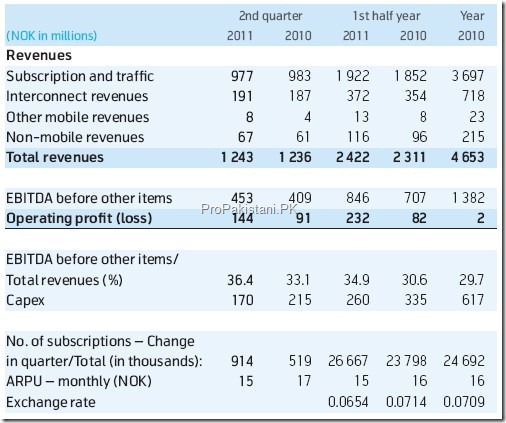 Following is PR sent to us by Telenor Pakistan:

Chief Marketing Officer, Telenor Pakistan Aamir Ibrahim, speaking about the solid second quarter figures, said: “I am happy with Telenor Pakistan’s performance in the second quarter of 2011. We have been able to sustain growth and keep our EBITDA margin strong despite operating in a challenging business environment.

As with previous quarters, we continue to receive recognition; Telenor Pakistan and Tameer Bank’s easypaisa won the Shaukat Khanum Social Responsibility Award in recognition of the service’s impact on society of organized philanthropy, an achievement we are proud of.”

Also in the reporting period, Telenor Pakistan launched Djuice’s ‘Apportunity’, a service that allows mobile application developers from Pakistan to create mobile apps and get them published.

Apps are published by Telenor Pakistan on the Nokia Ovi Store, Apple AppStore, and Android Marketplace for people around the world to download and enjoy.