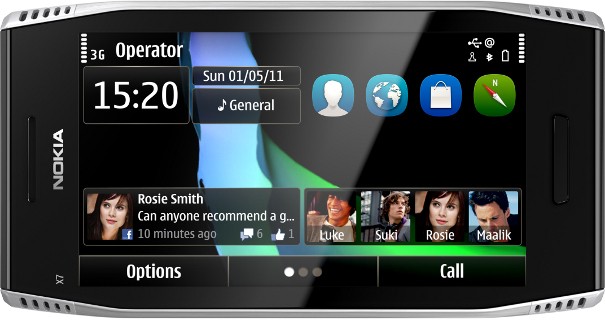 Nokia X7 is one of the front runners of Symbian Anna and is looked upon as the fun filled model of previously launched Nokia X6.

Nokia X7-00 has Wifi, 8 MP camera and supports 32 gigs of external memory card. It supports all networks including 3G. Phone has just been released and here is what you should learn before you shell out money on this precious smartphone, the latest rate can be figured out  from Nokia Mobile Prices in Pakistan 2011 catalog or read through the review and learn all the important stuff including the pricing.

Nokia X7 possesses one of the most beautiful and unique design in the smart phone category. Nokia has always taken the initiative to give a new direction to smart phone designs. The stainless steel finish gives it a classy appearance and the distinctive lines at the edges also give it a contemporary look.

The gently curved body makes it fit perfectly in your hand. The massive screen makes high definition gaming much more thrilling. In short the big screen entertainment is way beyond what one could have ever imagined. Its dimensions are satisfactory for a phone that offers a 4 inch display (119.7 X 62.8 X 11.9 mm). It weighs a bearable 146 grams.

Radio wise X7 is being categorized as penta-band device as it can easily be used on 1700 MHz AWS.  The screen offers real 16:9 aspect ratio which is generally used in 1080p videos. The speaker grill is placed at the top of the smart phone along with light and proximity sensor.

Nokia generally does not come up with thin smart phones but for this particular model the thickness feels much less as a result of the curved edges and with all the specifications and features one can easily say that the below mentioned Price of Nokia X7 is pretty much justified, we believe in couple of months time its rate shall go further down.

It is a smart phone designed for every type of user. After a long wait finally a full QWERTY software input has been offered by Nokia. Symbian Anna comes pre-installed in this cell phone and at first glance its interface reminds you of Android interface.

This is one fact that I simply fail to understand! Why would Nokia not put Android in this Phone? May be this was Nokia’s last efforts to promote its own OS in high end phones. It can be called a failed effort indeed as one would say that Symbian has no standing against Google’s Android or Apple’s iOS. 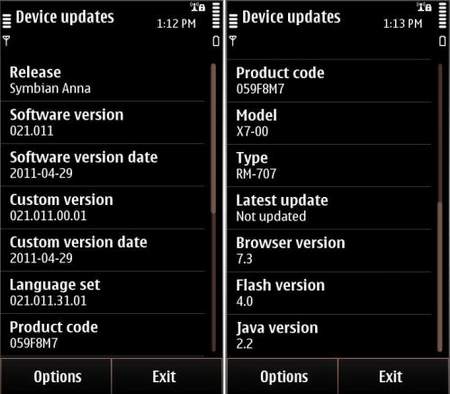 One could remain in constant touch with real time e-mails and personal updates popping out directly onto your home screen.

Fully customized home screens add an additional flavor to its beauty. One could add all of his or her favorite applications to one of the three customizable home screens. The free GPS navigation included in this smart phone makes the users discover more. It comes with free lifetime walk and drive navigation which includes voice guidance too.

It has a camera which gives solid and better performance, unlike the cameras in previous X series mobiles. The massive 8 megapixel sensor is capable of shooting sharp images and keep a decent contrast in them.

One major drawback being that Nokia X7 camera really struggles taking close up pictures. Video output is also appreciable though the frame rate could be a little higher but 25 fps is also good enough for average users. Click on pictures below to view bigger image size, courtesy of Mobilephones.pk and Pocketnow.

The performance of this smart phone depends heavily on the list of running applications and as soon the application list starts to fill up one will experience the need to close some of them. A little wait is needed in order for all widgets to be properly loaded. Eventually the users discover that its 680 Mhz ARM 11 Processor is just not fast enough!

The 1200 mAH battery at first seemed to be small for this kind of cell phone but testing has shown that it uses its battery quite efficiently and its battery could last anywhere between one and one and a half days. Talk time is 6 hours for 2G and 4 hours for 3G calls.

The company also claims that if used as a music player, its battery can last up to 50 hours. But primarily, the life depends upon how you use it. With more apps, it might give up before 24 hours!

Nokia X7 delivers a solid performance as it hardly drops a call. X7 really performances well when speakerphone is used. Handset also reproduces crisp and clear sound with a little mixture of bass. Its volume speakers are higher than average and there is no need to bring cell phone closer to your ear even when in a loud environment. Nokia X7’s reception is quite better than its counterparts namely iPhone and LG Optimus 7.

Nokia X7 is made of excellent build quality, camera is above average too, sound quality is perfect, AMOLED screen adds charm and respect to it. However the major drawbacks of this cellphone are that it unfortunately has a Symbian OS which is no longer a match with Android and iOS.

It also boasts a battery which cannot be removed like other ordinary 40 series mobiles, not only that, but it also has an unusual SIM and microSD card slots and not to mention the slower processor with relatively lower memory and not the best internet browsing. All these drawbacks make it slide down the rankings.

As far as the price is concerned, the Mobilephones.pk lists at the retail price of Rs. 39,800/- This price might vary as it is dependent of multiple factors, such as type of warranty, city and retailer. If you really like this phone and cannot afford to spend some money on it, we recommend you to wait a month or two and you will certainly secure this phone at relatively lower price.