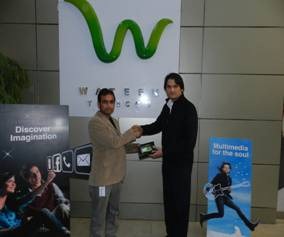 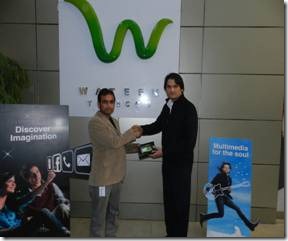 Wateen Telecom announced the winners of its third lucky draw in the ‘Recharge and Reconnect’ campaign through which it is incentivizing subscribers to recharge their accounts early.

The ‘Recharge and Reconnect’ lucky draw campaign is aimed at building a connection with Wateen customers, while encouraging them to recharge their accounts before the recharge date for each month.

Entrants need only ensure that they recharge their Wateen broadband accounts before the due date in order to automatically qualify for the lucky draw of that month.

This was the third round of the draw and was held on 26th December, with three winners announced and the prizes presented at a small ceremony held in the Wateen head office in Lahore on 2nd January.

Nayyar Waseem from Lahore won an I-pad, Owais Qureshi from Islamabad won an HP laptop and Shafqat Abbas from Lahore was the winner of a Dell Streak tablet. This was Nayyar Waseem’s second prize under the campaign, having won a Lenovo Laptop during the first round of the campaign. The winners received their prizes from Wateen’s Chief Commercial Officer, Syed Jibran Ali.

Commenting on the occasion, Mr. Ali said, “Wateen’s vision is to reshape the consumer life through the internet. We wanted to give back a token of our appreciation to our loyal customers who pay their bills on-time and show that even such a notion can be rewarding.”