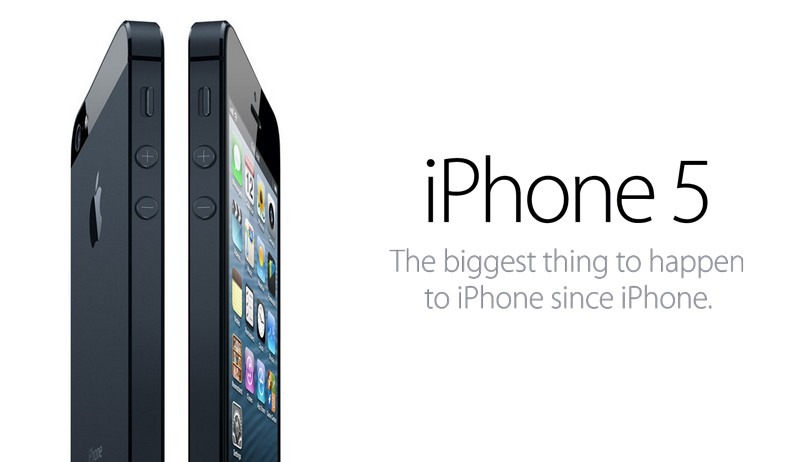 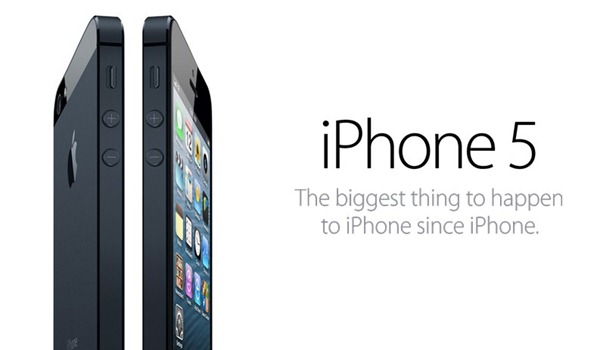 Apple has finally brought an end to the dozens of leaks which we’ve been seeing since the past 1 year by revealing the iPhone 5, which the company is calling its best phone yet – though the spectators, who ought to compare iPhone 5 with competition brands,  aren’t impressed with the claim.

Early response from technology enthusiasts remained negative, primarily because of no design enhancements, nothing revolutionary in the phone and because it misses the wow factor. Apple fans were awaiting a groundbreaking device with iPhone 5, especially in a era when competition brands (HTC, Samsung, Nokia and LG) are launching super phones every other week.

The iPhone 5’s most prominent feature is its bigger 4 inch touchscreen which was in a lot of people’s wish-list since quite a time, however unlike other manufacturers who increase both the length and breadth of the touchscreen, Apple has only increased the length of the device while keeping the width same.

Other improvements include better processor and camera. LTE connectivity is added with iPhone 5 too, for which Apple is likely to be sued by HTC for patent infringement, but let the time come to unroll the drama.

Here are the specs in detail:

“It’s the most beautiful product we’ve ever made”

It weighs just 112 grams and is only 7.6mm thick compared to the 9.3 mm thickness of the iPhone 4S. The back features an aluminum plate which will surely save some weight compared to the glass panes. 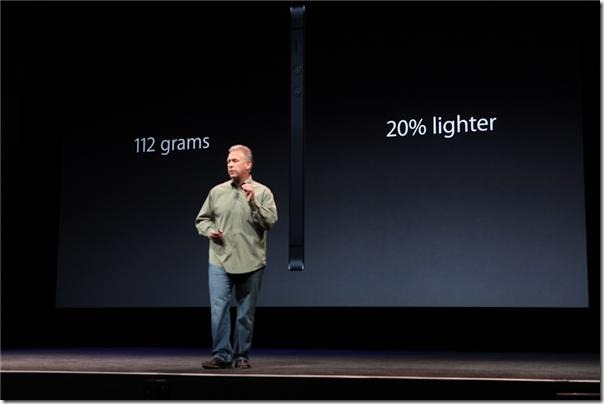 “When I say this display looks better, it really does look better.” Phil Schiller

The display of the iPhone 5, as already mentioned above, is of the same width but longer in length. Its a retina display with image density of 326 pixels per inch and aspect ratio of 16:9. The resolution is 1136 x 640 pixels.

Apple’s has said that this new display has 44% more color saturation and has an integrated touch panel. Its a multi-touch capacitive touchscreen of course. Apple has said that the screen size is just suited to the user’s hand. Regarding the app support, the company said that it has already customized all of its apps to work on the new iPhone 5 so app support won’t be a problem. 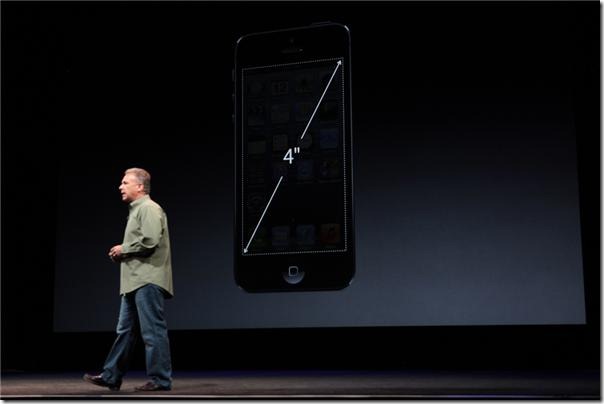 The iPhone 5 comes with an all new Apple A6 processor. Apple has said that this new quad-core chip is 2 times faster CPU than the previous one. The graphics performance are also twice as fast as before. The amount of RAM is most probably 1Gb but we’re not very sure about that. The A6 processor is also 22 percent smaller than the A5 processor found on previous Apple products.

The iPhone 5’s camera is updated too and they are calling it iSight. Its an 8 megapixel f/2.4 aperture camera with a 5 element sensor and a resolution of 3264 x 2448. Its protected by a sapphire cover to tackle scratches and hits. Its Backside illuminated now, can shoot 28 megapixel panorama images and can detect 10 faces simultaneously during shooting.

The A6 processor too processes images better than ever. The front facing camera is an HD unit to provide a better video quality during Facetime calls. The camera shoots Full HD videos in 1080p at 30 fps and allows you to take snapshots while recording the video. 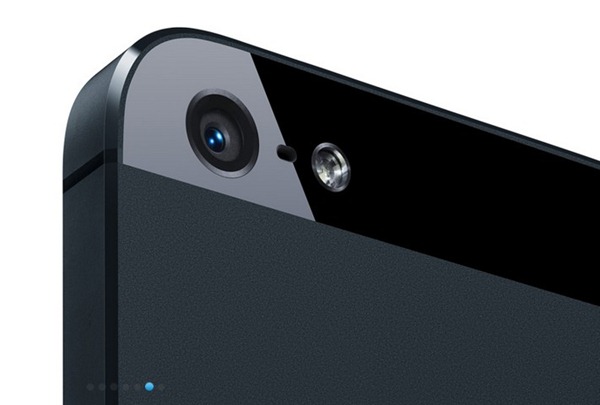 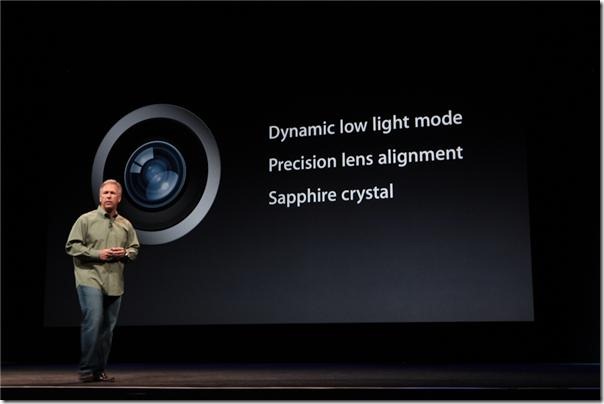 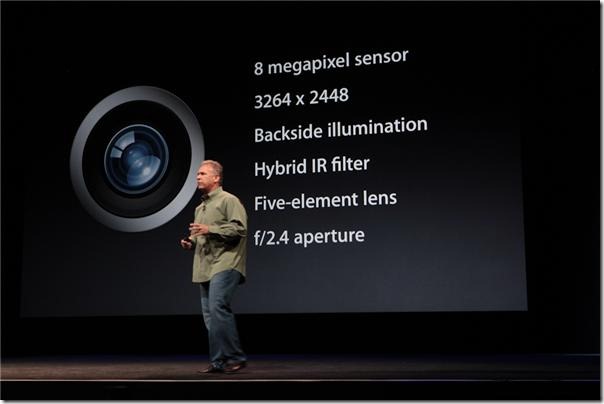 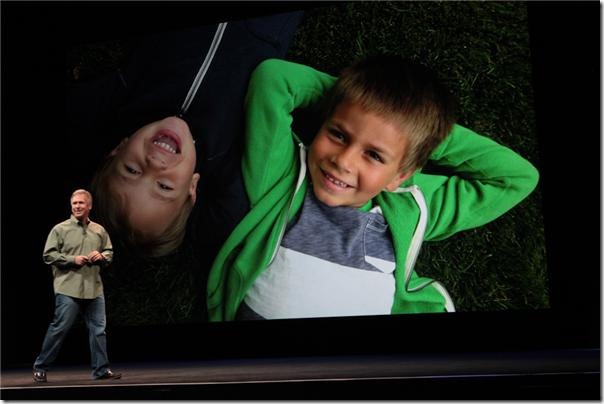 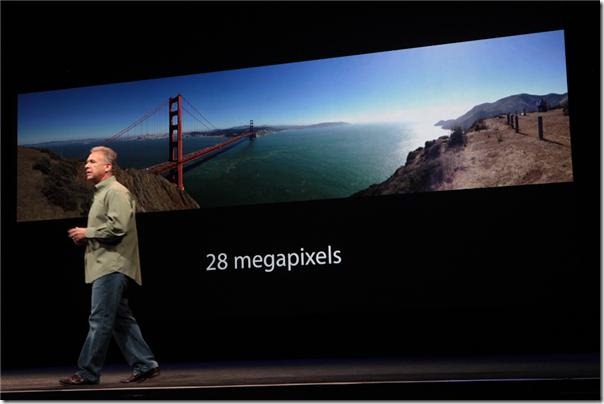 The iPhone 5 comes with 3 microphones to provide a better call quality and improved audio quality during video recording sessions. It comes with LTE connectivity and Bluetooth 4.0. But perhaps the biggest connectivity feature was the new ‘Lightning connector’. Its a more compact connector for the new iPhone 5 which is 80 percent smaller, more durable and easier to use.

Another big jump in connectivity for iPhone 5 is 4G LTE support, which is currently patented with HTC. So we aren’t sure, especially after the recent legal battles in iOS vs Android play, that this addition will make iPhone 5 a better device or will result into a ban in American market. 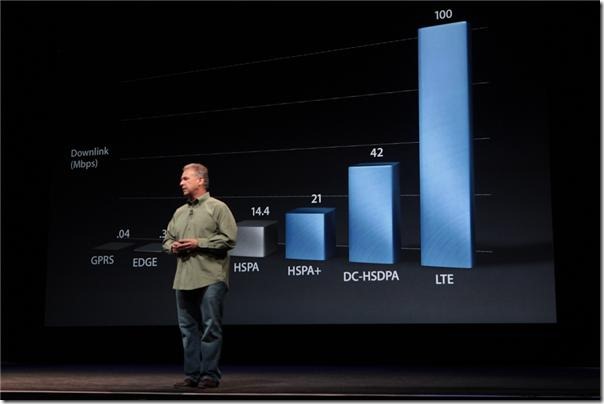 The battery life will be as long as 8 hours on 3G calls, 10 hours of video playback and 40 hours of music playback. 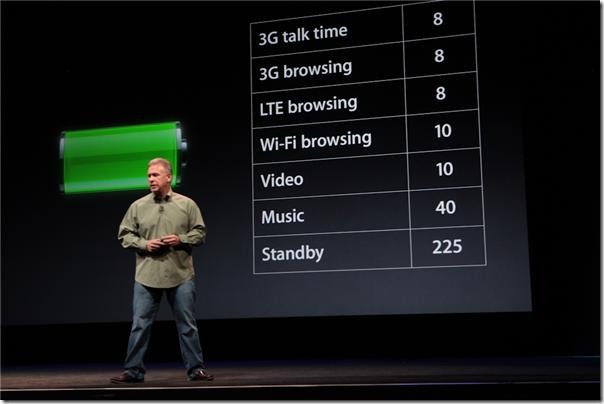 The iPhone 5 will come in 16, 32 and 64 GB flavors. As usual is the case with Apple, the price of the previous iPhone have been dropped and the 3GS has been discontinued. Good going.

The release date for the new iPhone 5 is 21 September 2012. Preorders are starting September 14th in select countries.

iPhone 5 will come with 2 year contract on supported carriers with $199 for 16GB, $299 for 32GB and $399 for 64GB variants. If you want to know about all the Apple mobiles, here’s a list of the latest Apple mobiles price in Pakistan and their specs. 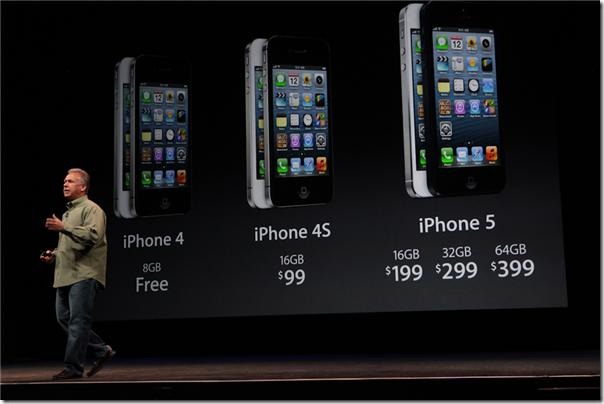 iPhone 5 is likely to be available in Pakistani story by early next month, we have checked with online retailers. They didn’t confirm anything about price but said that iPhone 5 will be priced in Pakistan around Rs. 70,000 for first two months at least.

If a better processor, better display and a better camera is all what you demand from Apple then iPhone 5 could be your next phone. Otherwise spending Rs. 70,000 or around on this device, when you have far better choices for going with HTC or Samsung, then iPhone 5 might not be a wise decision.

Conventional design from Apple that have been carried forward from its first generation may depress you more.

Definitely the lightning Connector isn’t the kind of innovation for which you will upgrade your phone. This had happened with iPhone 4S and now with iPhone 5 – the Apple has failed to add any revolutionary feature that their fans expect from them.

Nevertheless, if you are an Apple fan then you can wait for another year for a better device or stay contented with iPhone 5. Because this is company’s best phone yet, but unfortunately its not the market’s best.

So does the iPhone 5 suit your needs and will you be looking forward to buy it? Let us know!