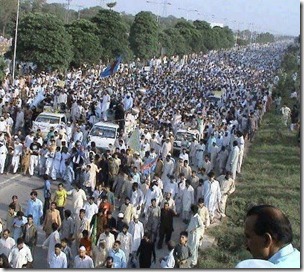 Friday, September 21st, 2012, was marked as Ishq-e-Rasool day in Pakistan when government had announced a public holiday to show our love for the Prophet Mohammad (P.B.U.H) and to protest against the anti-Islam movie, independently made by an American.

TV Channels largely (rather they only) showed the protests that went violent, involving protestors doing all kind of destruction.

Almost all major TV channels were running non-stop coverage of violent protests in (less than half a dozen sites in) Peshawar, Faizabad (Rawalpindi) and PIDC (Karachi).

No doubt the violence was there, in fact 17 deaths were confirmed in addition to an estimated loss of 75 billion during the protests on a single day.

But there were many peaceful protests too. Muslims and non-Muslims from every village, town and city of Pakistan protested by forming rallies on the day against anti-Islam video. But apparently media men were too busy in showing the violence in less than a half a dozen sites and completely ignoring thousands of other rallies that concluded peacefully.

Social media had sensed this soon and being an alternate media the pictures and coverage of peaceful protests and rallies started emerging on Facebook and Twitter.

Many of you would have already seen (if not participated in) those peaceful rallies on Facebook, especially those in which tens of thousands of Pakistani Muslims offered Asar prayer before Parliament House in Islamabad and in front of US Consulate in Lahore.

TV channels were showing the violent protests only. I mean that’s okay if they had shown those protests that went violent – but only showing non-stop violence with no mention of peaceful rallies at all?

I believe the conventional media (also dubbed as corrupt media) either forgot that there is a social media to keep a watch or they were so heavily funded that they had no other option but to show deaf ears to peaceful protests.

This coverage, that showed half picture by portraying Pakistani Muslims as violent, has already made an impression on west, which is headlining the day as deadly, violent and non-acceptable. For example, BBC has reported following in one of its stories:

Friday’s violence occurred in cities throughout Pakistan, with Karachi and Peshawar among the worst hit.

Before I ask you about your thoughts for the coverage, I was wondering if there was any hidden agenda involved in showing violent protests only? Was this coverage funded? Or this was just the un-intentional mistake of media for earning ratings and TRPs?

Just to let you know, US authorities confirmed that at least $70,000 were given to Pakistani TV channels for showing pro-American ADs.

We are embedding a poll here with an option to comment below on the topic:

Also watch below video, which won’t be shown by your TV channels: