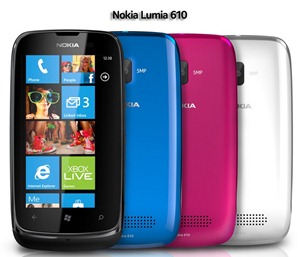 Nokia Lumia 610, claimed to be the most affordable Lumia series smartphone, is now available in Pakistan. It was released worldwide in April 2012.

Powered by a Windows 7.5 OS, Nokia Lumia 610 offers the sleekness of the Windows smartphone coupled with the affordability and reliable warranty of Nokia.

The device comes preloaded with Nokia’s suite of experiences including Nokia Maps, Nokia Drive and Nokia Transport, in addition to over 100,000 apps to choose from on the Windows Marketplace., the built-in Microsoft Office app and Xbox Live. People Hub makes it easy for people to keep in touch with friends, providing instant access to social networks and bringing all mobile, email, Facebook, Twitter and LinkedIn contacts into one place.

"The Nokia Lumia 610 will introduce Windows Phone to a new generation of local smartphone users, offering them something different and valuable in terms of pricing and features," said Arif Shafique, GM Operations, Nokia Pakistan. "With Nokia services, quality apps and a plethora of built-in features coupled with a fast and friendly interface, Nokia Lumia 610 has everything in the package to make it an instant hit among the aspiring youth of Pakistan.”