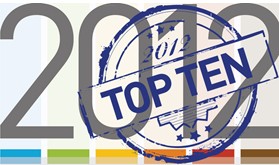 Telenor Pakistan has been ranked as the top employer in the country amongst various sectors, as per the survey conducted by ROZEE.PK in collaboration with Yougov, a leading a leading global opinion pollster based in UK.

Compensation & benefits, brand image, career growth, better work environment and social responsibility were the factors for selection of Telenor Pakistan as the most preferred employer.

In the industry break up category, Telenor Pakistan led from the front as the most preferred employer in the telecommunications industry with 56.79% votes.

“This is a worthy accomplishment for Telenor Pakistan to be declared the top employer in the country.

We attribute this to our people centric culture and egalitarian values that provide a progressive and growth oriented work environment. We believe that our people are our real asset and nothing is possible without their hard work, commitment and dedication.”

According to the survey report for 2012, a total of 9,068 respondents took the survey in 16 weeks and specified their preference to work for the top employer in the country. Respondents had the choice to pick one employer from a list of 1,169 companies or choose an alternate company. 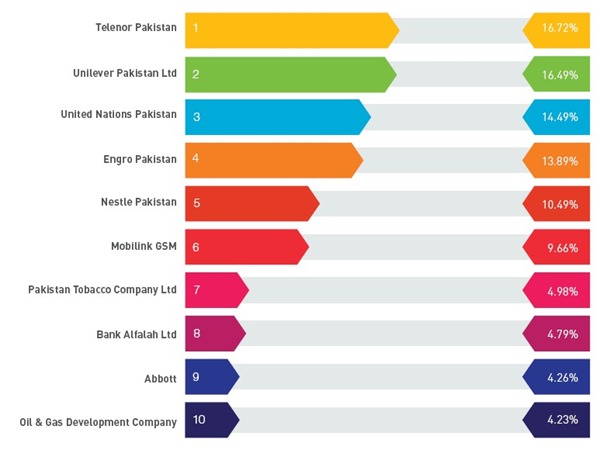 Telenor Pakistan, takes up the number one with more than half of the weighted votes given to the top three employers in this category. Mobilink follows behind with 33% weighted votes and Ufone becomes the third top employer as preferred by respondents.

Other notable names who despite obtaining significant respondents votes do not appear in the the top three list are PTCL, Warid Telecom, Wateen Telecom and Wi-Tribe Pakistan Ltd. 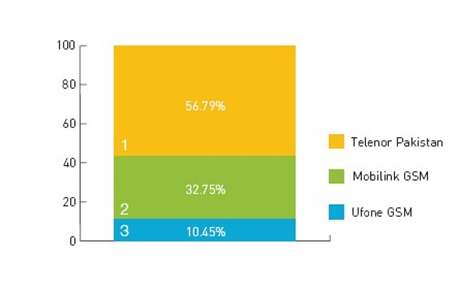 Microsoft leads with 33% weighted votes in the Information Technology sector. Following closely are Netsol Technologies and AbacusConsulting with approximately 30% and 31% weighted votes respectively.

Other notable names that received significant votes are Teradata Pakiatan and 3D Cellular. 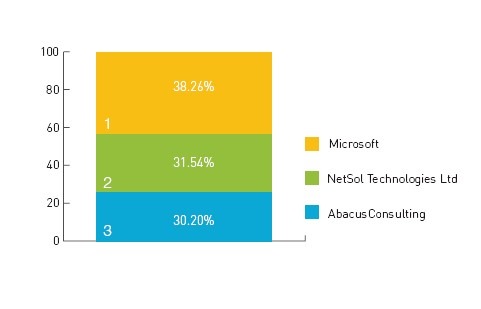 Of the 12% females who took the survey, about 21% have voted for United Nations Pakistan to be the top employer amongst nine others selected.

A total of four FMCGs are listed under the top ten employer banner by females. Females were more inclined than their male counterparts towards the NGO/Social Services sector with the inclusion of both the UN and Aga Khan Foundation. 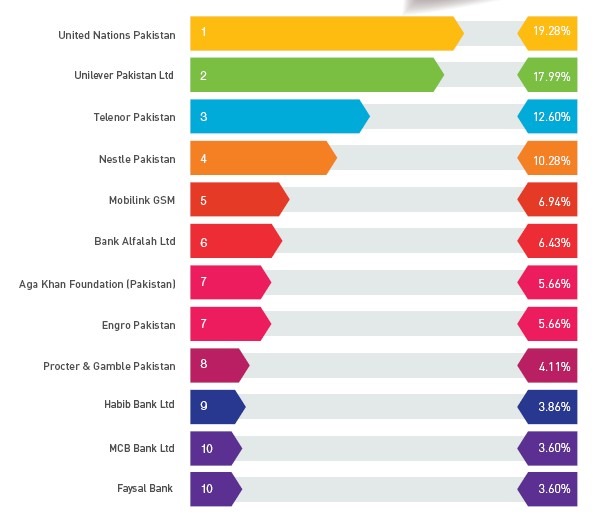 88% males responded to the survey, and of these about 17% have voted for Telenor to be their top preferred employer in Pakistan, followed by Unilever Pakistan that acquires approximately 16% votes from the male respondents.

Also noteworthy is that four banks were ranked as the top employers by females, whereas as only one was selected by males. 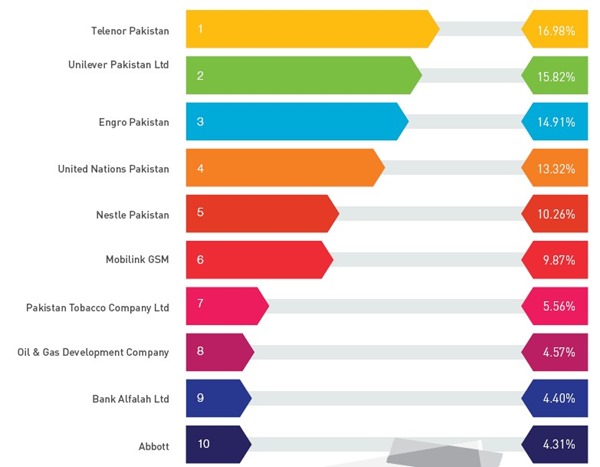